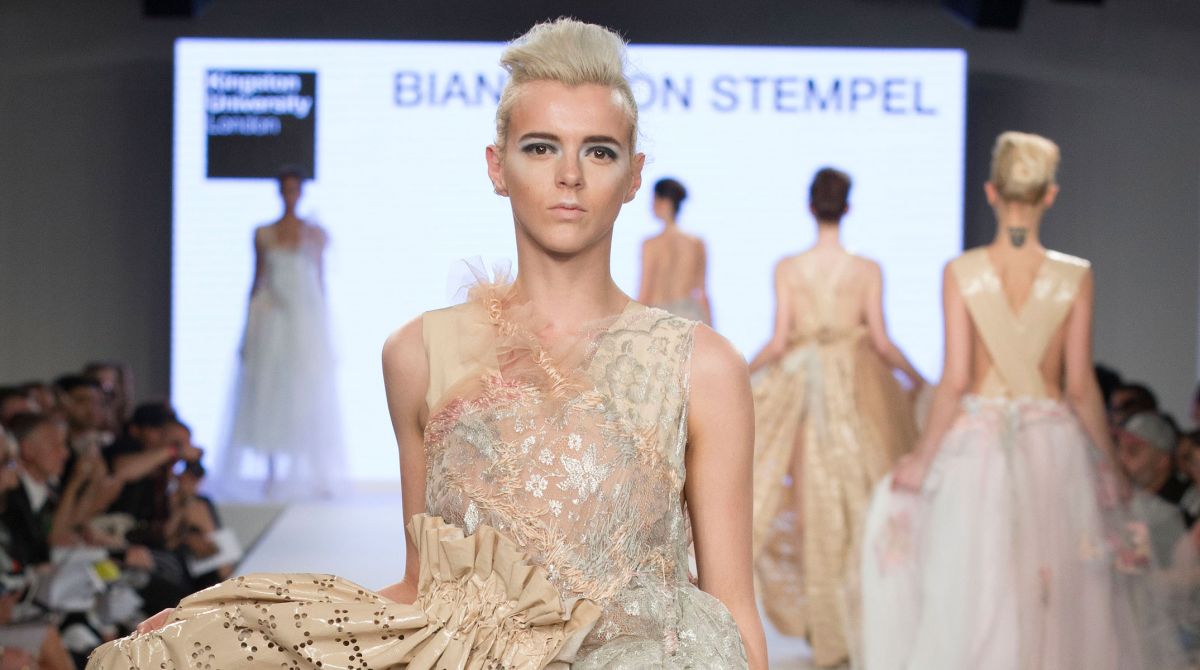 A visually impaired young designer from Kingston University has been shortlisted for a coveted award after impressing industry experts with her womenswear collection during Graduate Fashion Week. Bianca Von Stempel, whose garments are inspired by the way she sees the world, was one of 22 final year BA(Hons) Fashion students who unveiled their looks on the runway at the Old Truman Brewery in east London as part of Kingston University's show.

The 23 year old, who is registered blind and has no central vision, uses her heightened sense of touch to decide how pieces of fabric should be put together. Her feminine, asymmetrical designs are made from sheer and mottled fabrics such as organza, lace and silk chiffon, which are layered to create a blurred effect that represents how she sees the world around her.

After showcasing her collection during the 25th year of the annual fashion extravaganza, Bianca has been named one of six students shortlisted for the prestigious Sophie Hallette University Design Challenge, which celebrates innovative and creative use of lace. 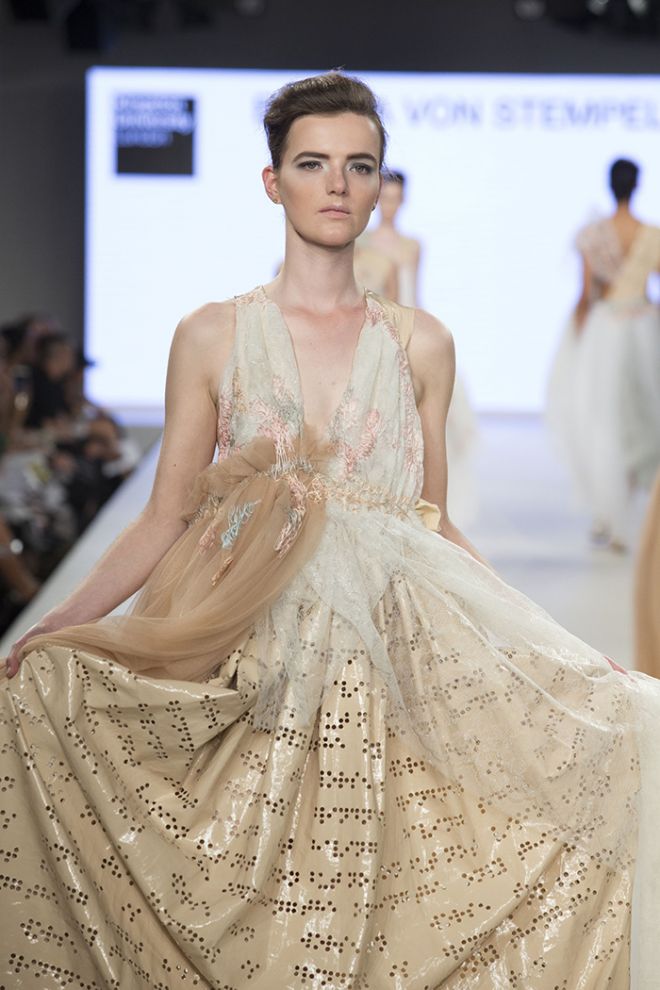 The fashion student from St Margarets, south west London, said her designs were based around her visual impairment, using her lack of sight in a positive way. "It was so exciting to unveil my garments out there on the catwalk, particularly after all the hard work that has gone in to creating them," she said. "It's an honour to be shortlisted for this award, you never know what's going to happen next but I'm just so grateful for all the support and encouragement I've received."

Inspired by the late deaf and blind American author Helen Keller's famous quote, "the only thing worse than being blind is having sight but no vision", Bianca has incorporated the words into the fabric of her garments to create a form of negative, or inverse, braille. Although she learned to read and write as a teenager to help pursue her artistic dreams, she has used the tactile writing system since childhood.

Rather than the raised bumps you would normally have with braille, the holes have been laser-cut into nude pink-coloured coated canvas. "The shapes becomes different letters depending on which way you turn the material, as the patterns work back to front. I wanted to explore the idea of viewing things through touch - not just with your eyes."

Bianca's technique involves mostly designing on a mannequin - placing material on to the stand then sculpting and stitching it together by hand. She uses a large sketchbook to draw detailed illustrations of her ideas as she works. "I've always drawn, but I wanted to be able to bring my illustrations to life by making them into real garments," Bianca said. "Because I can't see much with my right eye I always concentrate the detail on the left side of my garments."

As the collection took shape, Bianca worked closely with a team of technical support workers who helped her with visual tasks such as pattern cutting, as well as assisting with some of the more intricate computer design work in the Kingston University studios.

Principal lecturer in fashion Andrew Ibi said working with Bianca had helped sharpen his tools as an educator. "My role has been to help empower someone who's visually impaired to take ownership of their work. This has meant deconstructing some of the design processes and coming up with solutions that work for Bianca. We've had to re-write some of the usual rules - but that's what designers have been doing for years," he said. "Bianca's an amazing hand sewer, illustrator and embroiderer - she has incredible tactile skills and is capable of really understanding clothing. She works like a sculptor, reverting back to an almost couture technique."