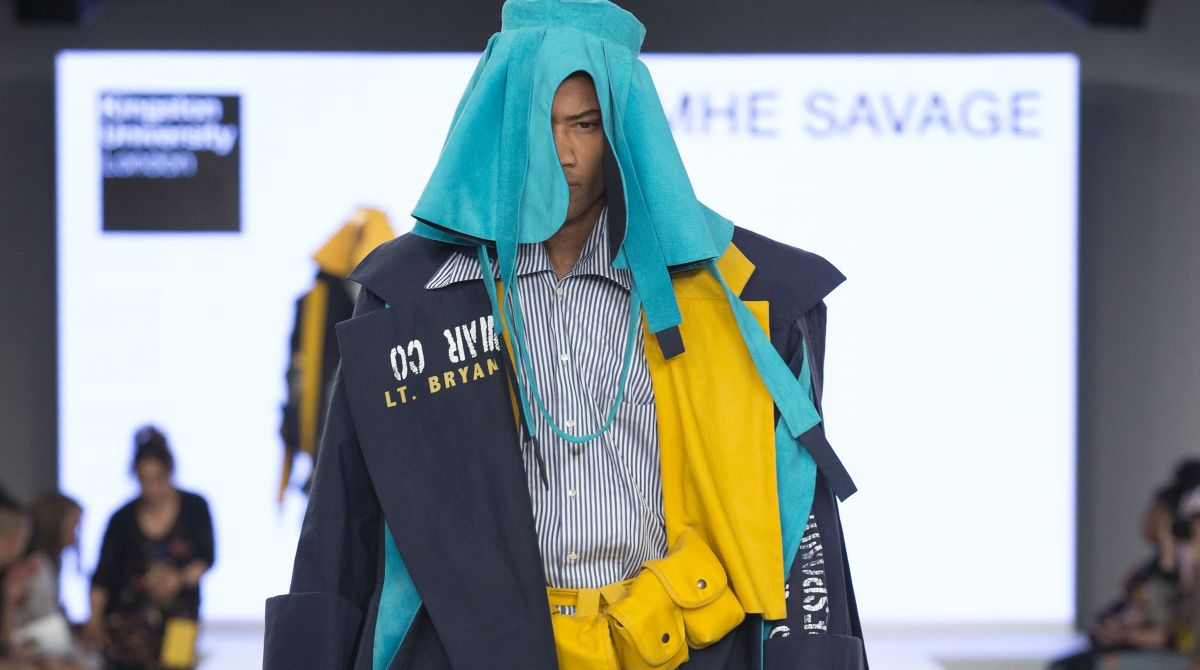 A Kingston University designer whose colourful military-inspired collection puts a modern spin on the traditional soldier's uniform has carried off the prestigious menswear prize at Graduate Fashion Week.

Caoimhe Savage was presented with the coveted award, which comes with a £5,000 cash prize, during a star-studded gala event which marked the end of the annual industry showpiece in East London. The judging panel was impressed by her vibrant oversized garments, which blended elements of Japanese Second World War uniforms with those worn by German and British soldiers. 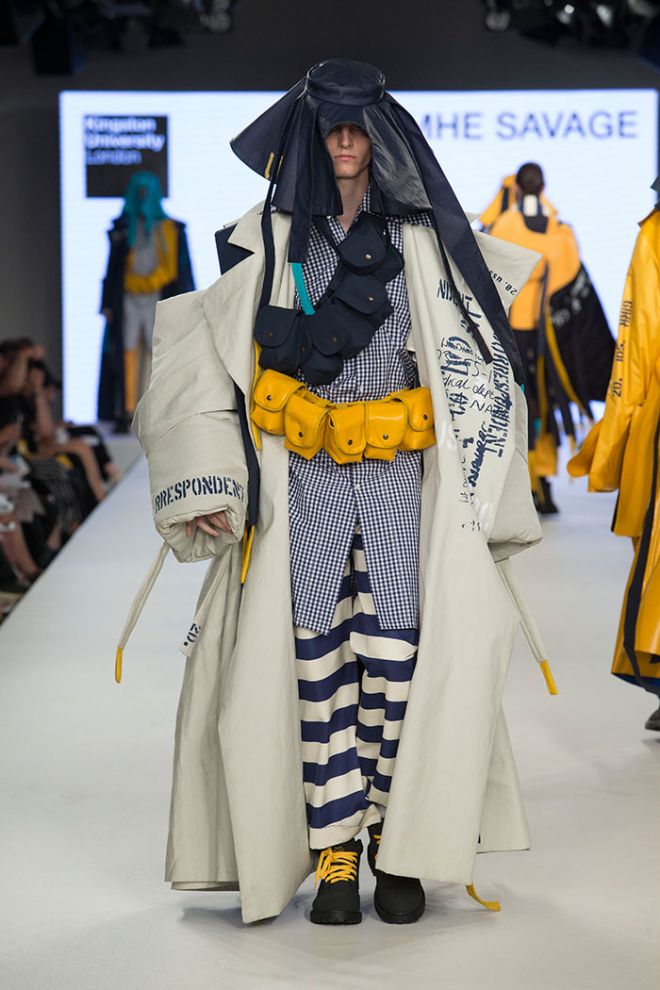 The 22 year old told how her designs were inspired by a visit to London's Imperial War Museum. "I was looking at all these military garments and started thinking about how I could bring them together in one outfit," she said. "I always have a sketch book with me and started drawing, creating a character based on the concept of a clash of cultures."

Taking further inspiration from a striking image of a German sniper in an oversized coat and hood, the young designer from Broadstairs, Kent, used a mix of mustard and navy waxed cottons as well as corduroy and cotton fabrics in her collection. The garments are heavily layered, with long gingham and striped shirts covered with gilets, long outer coats and waxed cotton utility belts.

"I didn't want my designs to reflect a typical soldier, I wanted them to be fun and unthreatening. I used bright colours to represent the modern day, while the layering comes from the heavy military-style outfits, with the idea of protection running through it. The over-sized hats represent the fact I wanted to hide the character's identity. There's a strong cohesion throughout each look as I wanted each element to be interchangeable as well as really emphasising the movement of the fabrics."

Caoimhe followed in the footsteps of her father Jason - himself a Kingston University architecture graduate - when she embarked on her degree at its Knights Park campus. She completed her course by becoming one of 22 final year BA(Hons) Fashion students selected to unveil their looks on the runway during the 25th anniversary of the annual fashion extravaganza as part of Kingston University's show. The four-day event featured the collections of more than 1,000 of the world's top fashion student and graduates.

Reflecting on the experience of being handpicked to showcase her designs in front of a gala show audience of talent scouts and industry experts - including Vivienne Westwood, Julien Macdonald and Christopher Bailey - on the event's final night, Caoimhe said it was an experience she would never forget. "I still can't believe some of the biggest names in fashion were in that room looking at my collection. I've learned so much during the past three years at Kingston University and can't wait to become part of the industry now."

Design tutor David Frizzell said Caoimhe's natural ability to challenge conventions and reinvent clothing gave her work real impact. "She's always been an innovative designer," he said. "Her designing is exaggerated, experimental and very recognisable - adding up to quite a unique identity. In all my years teaching fashion, this collection is as memorable as any I've seen."