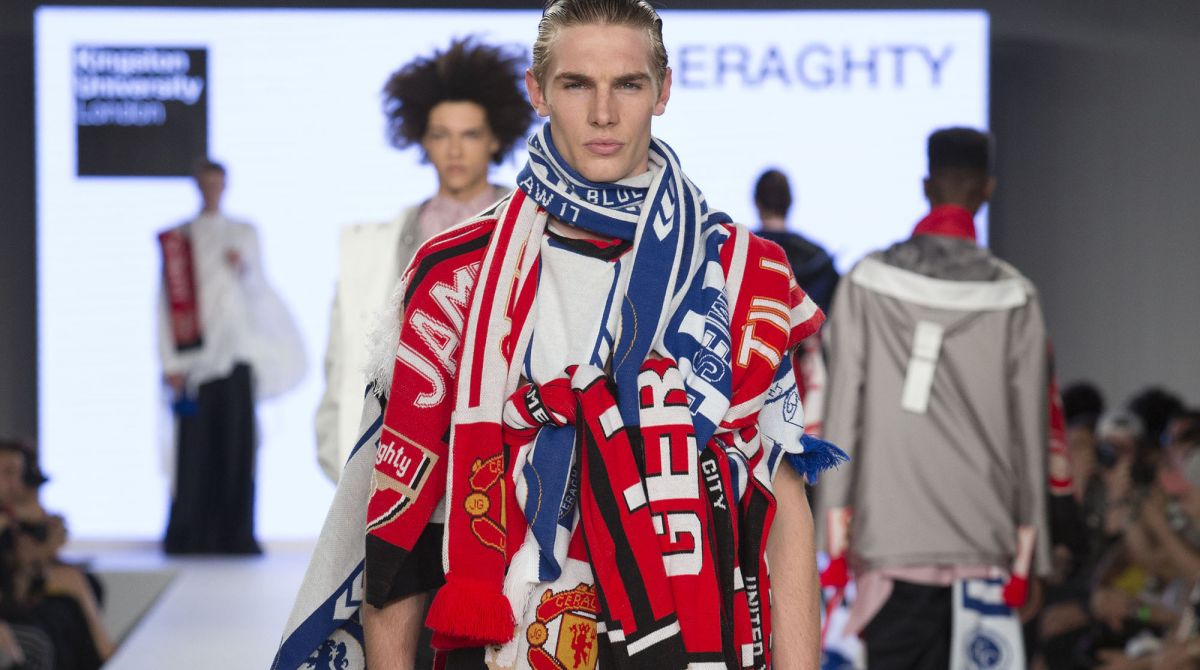 While sports fans have been descending on France for Euro 2016, a Kingston University designer has been scoring accolades for a football-themed collection inspired by supporters' devotion to their beloved teams. Centred around the theme of obsession, James Geraghty's striking menswear range focuses on the people and passion at the heart of football clubs.

Recalling childhood memories of cheering on Queens Park Rangers FC with his father Keith and brother Robert, the final year BA(Hons) Fashion student's garments bring together the instantly-recognisable emblems of top Premier League sides such as Manchester United FC, Chelsea FC and Arsenal FC, but with a twist - each now features the name of his own, fictional team, Geraghty FC. "The whole collection is about when someone becomes so obsessed with something in their lives that it takes over, it's all they think about," James said. "Football is the perfect thing to represent that. I remember the feeling of going to games as a teenager with my family, and for some people, it's part of their identity, who they are. 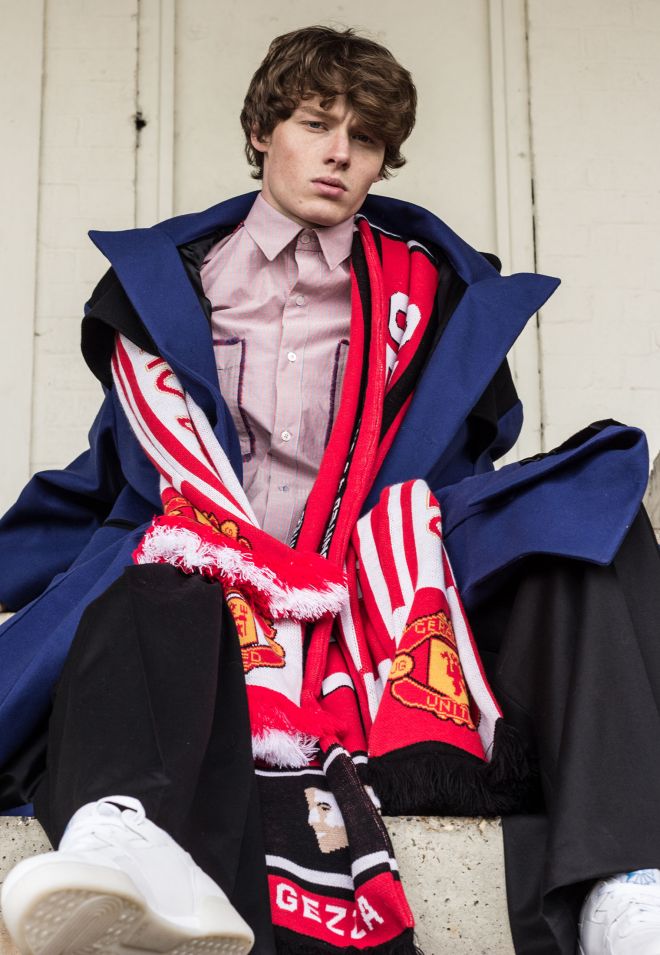 James Geraghty's designs are inspired by fans' devotion to their football clubs."I've always loved branding, and decided to take the brands and logos associated with some of the country's best-known clubs and replaced their name with my own - so Manchester United became Geraghty United, and Queens Park Rangers became James Edward Geraghty."

Each of James' designs features several acrylic scarves embroidered with his eponymous logos, which he knitted on the Shima machine in the University's fashion studios. The red, blue and black scarves have then been loosely seamed into jackets, shirts and Italian wool and cashmere trousers, allowing them to move and flow within the garments as they would when draped around fans on the terraces.

"There was one image that struck me during my research showing a Liverpool FC fan wrapped in scarves - he wears them everywhere he goes," the 22 year old from Bexhill, East Sussex, said. "That image captured the themes of obsession and movement I wanted to represent through my garments."

James ­- who unveiled his latest collection on the catwalk during the 25th anniversary of Graduate Fashion Week as part of Kingston University's show - developed an interest in classic menswear during an internship in New York with leading label Banana Republic. Placing modern menswear tailoring at the core of his aesthetic, his garments feature wools and other fabrics traditionally used in suits and formal wear.

Tutor Todd Lynn said that what set James' collection apart was his ability to take iconic elements of menswear designs and put a new spin on them. "The garments themselves are part of the wardrobe of the characters he creates, these obsessed football fans, and the scarves bring the collection together to represent the way they see the world," he said.

"James was able to say something with his work - as well as having fun with it - and that's something that's really important in the fashion industry."