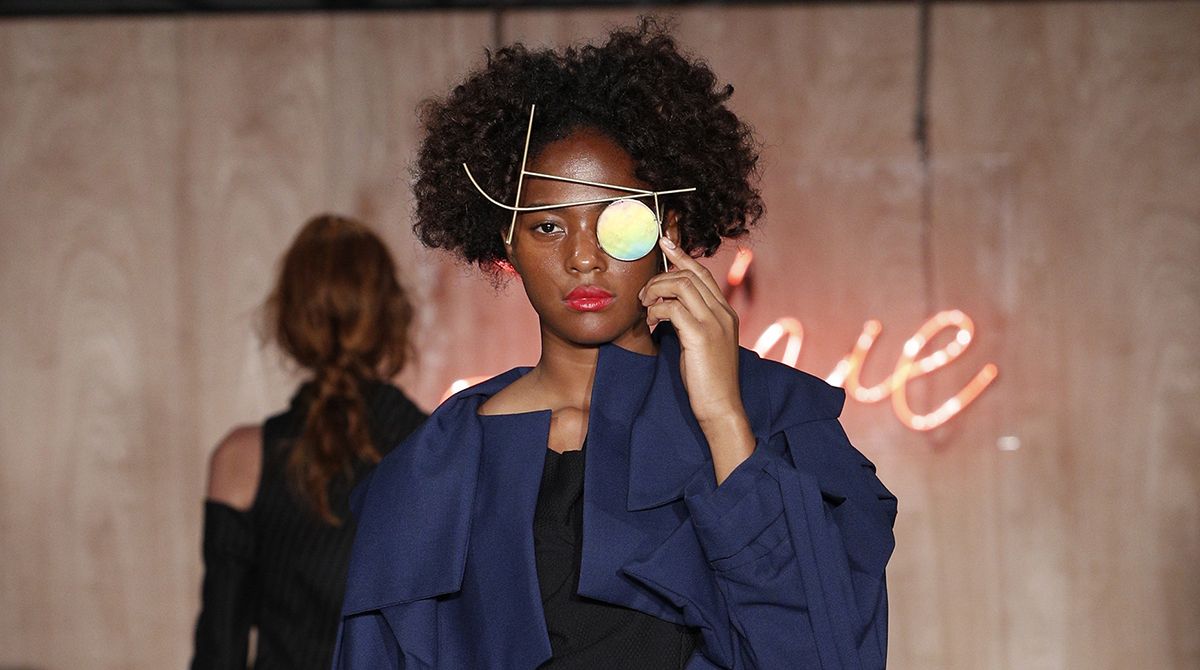 A computer game, a dance performance and a nod to freedom fighters around the world were just some of the latest works Kingston University's graduating designers unveiled at their annual MA Fashion show.

Visitors were treated to an eclectic mix of collections that centred on themes of movement and evolution, with undertones of political tension simmering throughout. Launched on the eve of London Fashion Week at the Vinyl Factory in Soho, the show was the culmination of months of research undertaken by the students, who graduated in July. 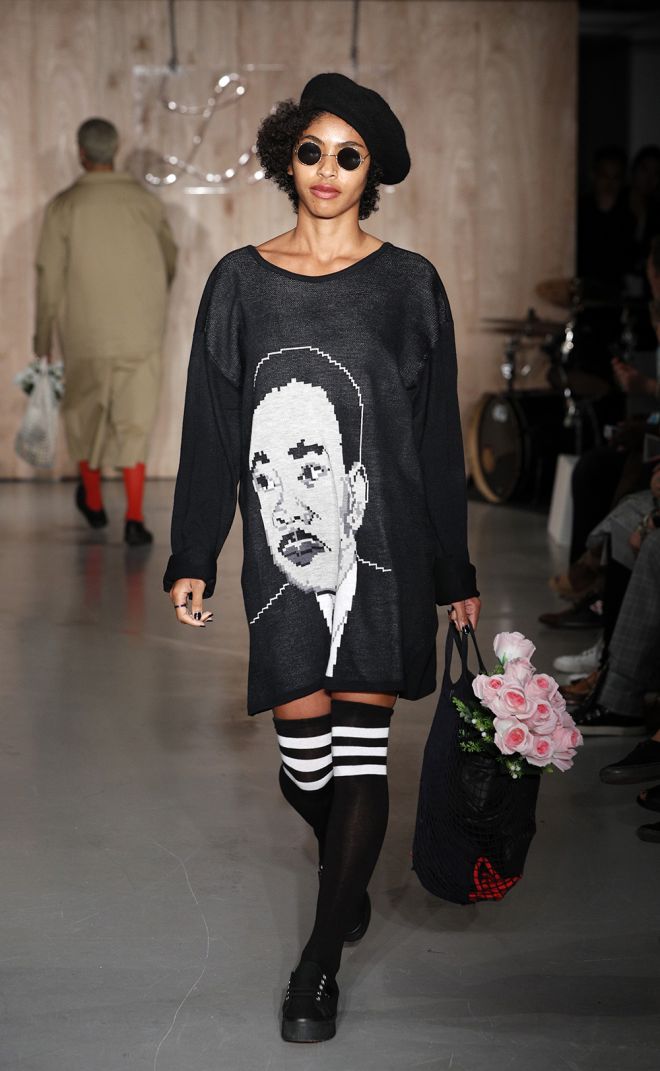 Artist Leyman Lahcine's garments are a response to the mainstream media's portrayal of conflict in his country.Among the garments that took to the catwalk were French-Algerian artist Leyman Lahcine's vibrant range of jumpers, featuring the knitted faces of freedom fighters including Martin Luther King Jr, Vietnamese revolutionary and politician Lê Äuc Tho and inspirational Pakistani female education activist Malala Yousafzai. Spurred on by attacks in his home country last year, Leyman explored the struggle he felt to fully understand the conflict amidst waves of messages about patriotism and solidarity in the French media. "My collection looks at propaganda and media manipulation and the feeling of wanting to rebel against it. I've created a conscious sub-group of characters driven by the feeling of wanting to know the truth and fight for peace," he explained. "I called this collection 'a full state of consciousness' to highlight the idea that people won't believe the lies anymore - we cannot be manipulated."

Leyman has coupled his red, yellow and black knitwear with edgy pieces including a leather jacket inspired by 1970's New York gangs, with the slogan Resist to Exist sprawled across the inner linings. The 28 year old from Grenoble says his work is a result of the critical thinking encouraged throughout Kingston University's postgraduate fashion degree programme.

Fellow student and gaming fanatic Odella Yue, 22, turned to the workings of the inner mind in her quest to create a computer game featuring garments that embody the spirit of her character, the Neon Wanderer. She developed an interactive design game that allows consumers to generate exclusive prints for their character, based on how they play. Describing herself as 'the nerdy one', Odella drew from her fascination with games and comic books and blended her inspirations with an unusual dental health experience. "I had to go through four rounds of surgery and, while being in unbearable pain, I experienced bizarre dreams that I psychoanalysed and transformed into graphic prints I used for my collection," the young designer from Henan in China explained.

Kingston University MA Fashion student Odella Yue created a computer game that allows users to develop bespoke prints."When I recovered, I realised what an incredible privilege it was to have my health back and be able to put my dreams into illustrations. I use the computer game as a gateway for the audience to visualise their own personal experiences in a similar way." Odella mixes a range of colours including black, blue and red silks with textured, metallic, quilted fabrics to create elegant silk jackets, finished with a black binding to outline the silhouette of the garments and create a graphic visual effect.

Former dancer turned designer Nigel Guérin-Garnett opted to display his designs in the environment they were intended for - as costumes in a contemporary dance piece that kicked off the evening's events. "I felt that my fashion needed to be expressed in a new way," he said. "There's a specific aesthetic throughout this piece that associates with discovery, exploration, acceptance and celebration. At this level, I've really had to figure out my identity as a creative person and to question the structure of the industry, which I hope is what the dancers reflect."

MA Fashion course leader Andrew Ibi said part of his role was to help the students to develop their identities and react creatively to their surroundings. "We labelled this year's show Live, as a reflection of how this diverse cohort of students sees the industry and its changing position within the world," he said. "It was my job to push them to deliver high quality, professional work that is critical in its approach - fashion has its flaws and it's important the students are well informed and ask the right questions."

Mr Ibi believes the show reflected the need for fashion to engage with new and dynamic global developments. "Fashion is a discipline that embraces progress and these young designers have really explored recent cultural change around consumption and value. The show was a manifesto of their work and what the industry means to them - hopefully, they will have inspired the audience to think of fashion in a different light." 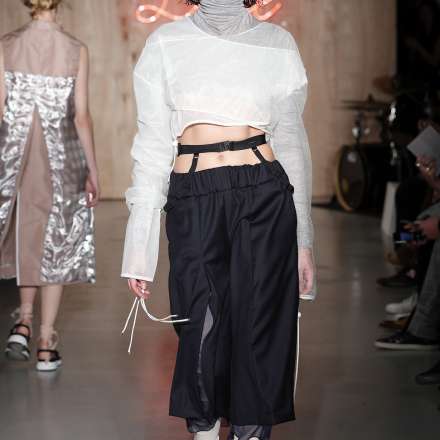 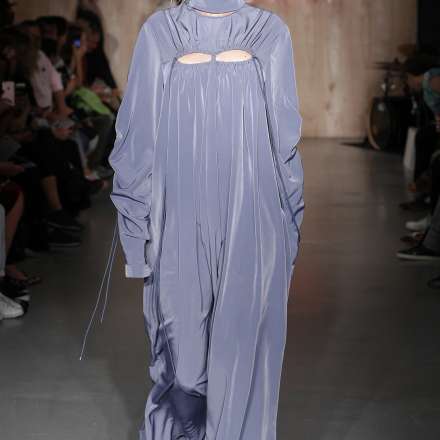 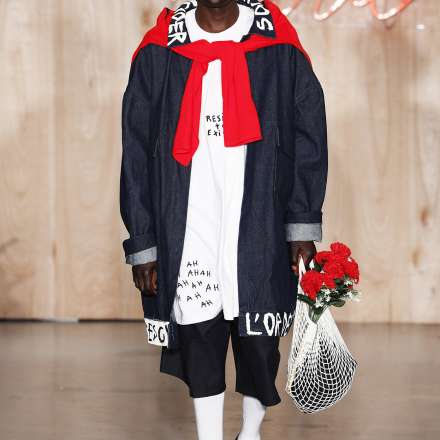 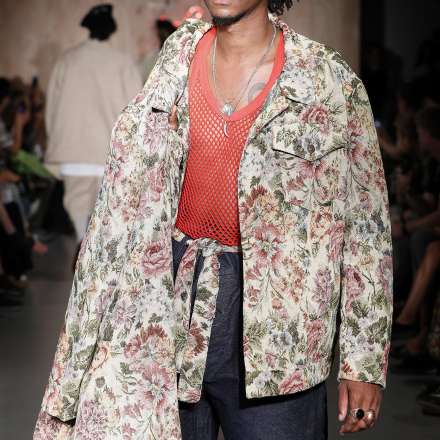 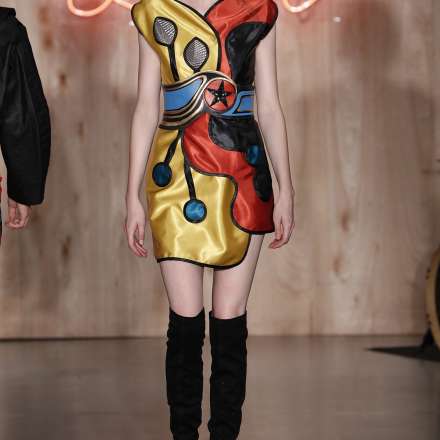 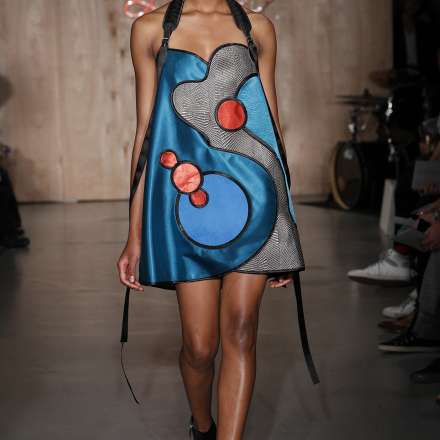 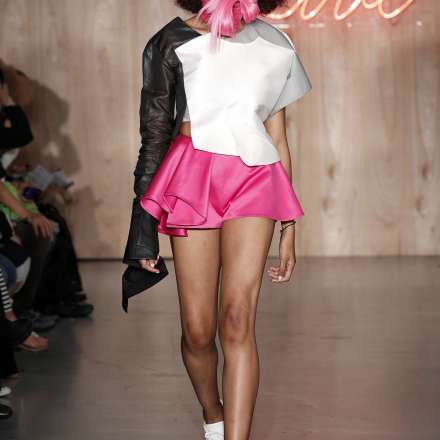 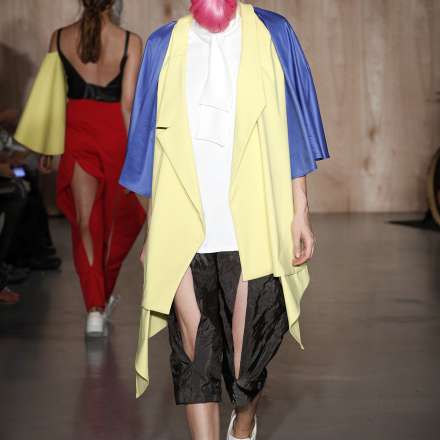 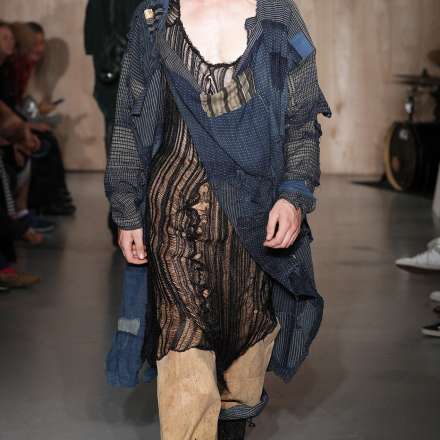 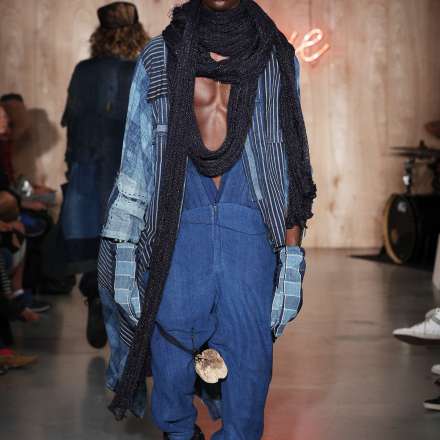 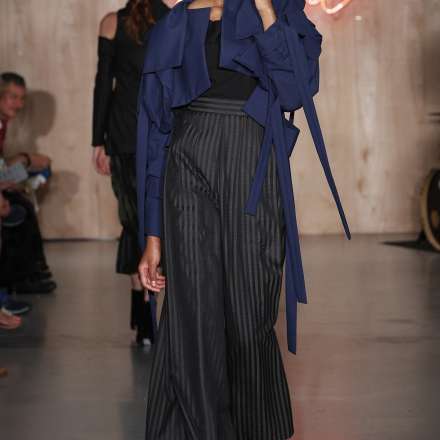 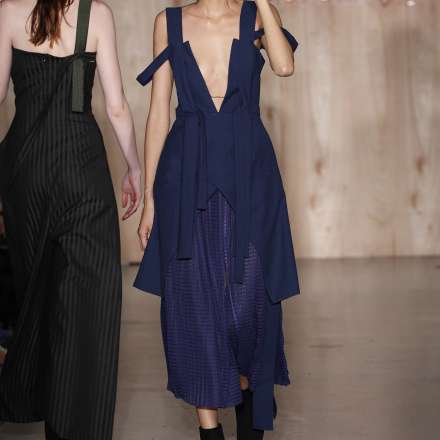 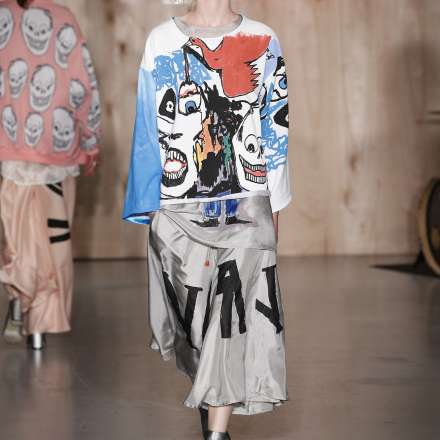 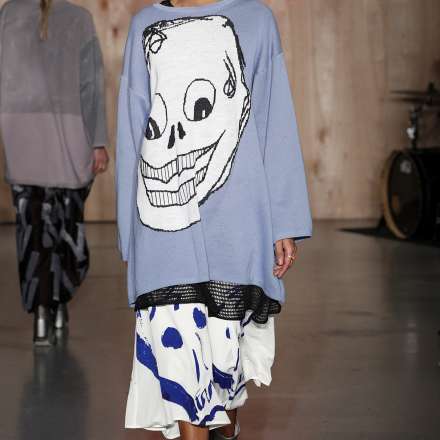 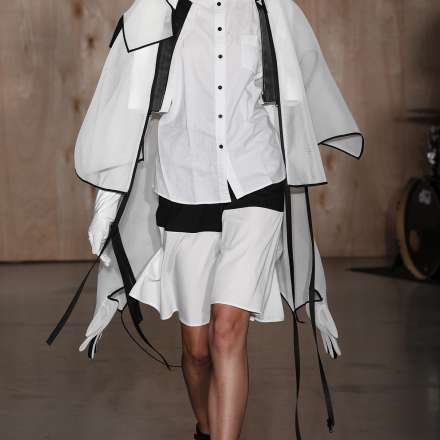 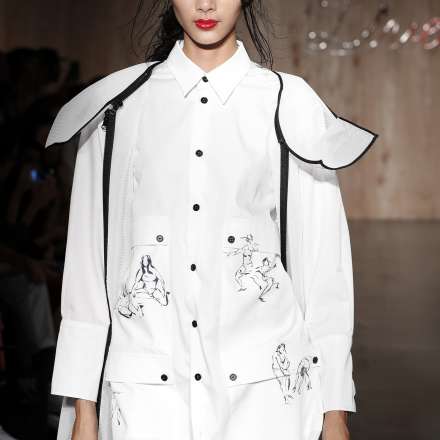 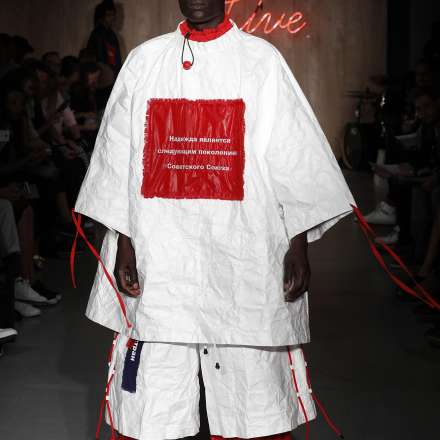 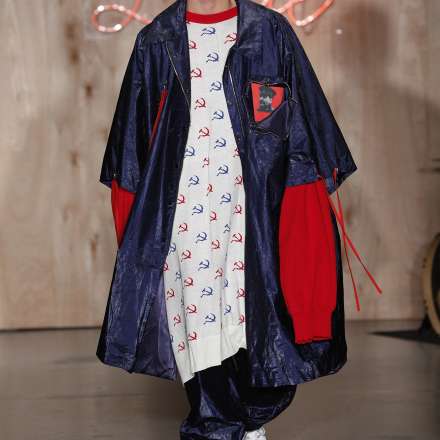 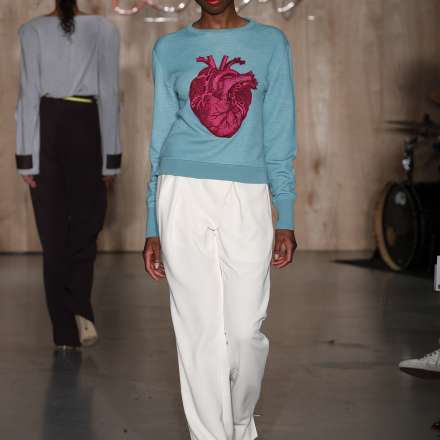 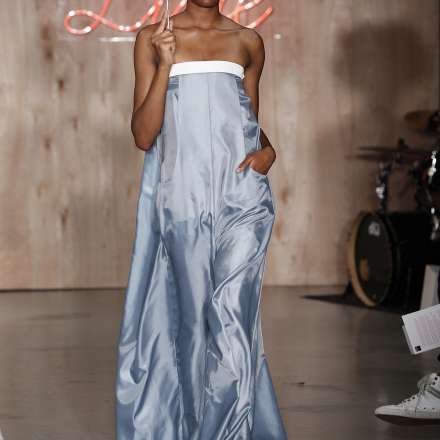