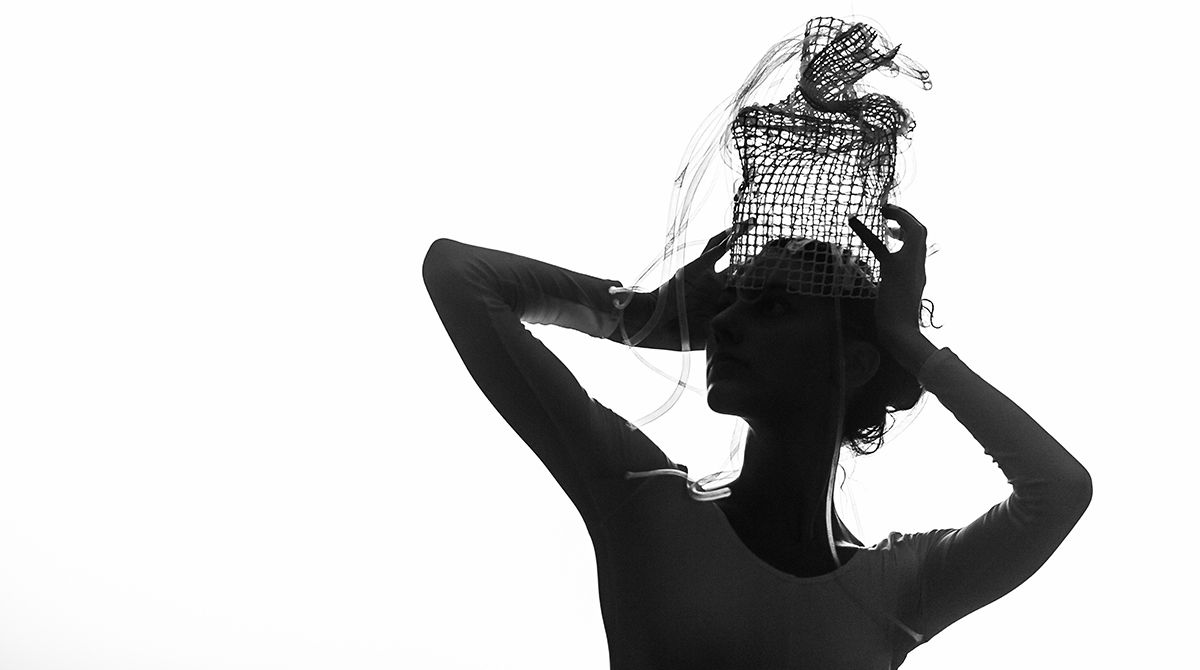 Fashion student Nigel Guérin-Garnett woke up at exactly 3.44am one morning to scribble down a vivid dream he'd just experienced. A couple of weeks later he awoke at 1.42am following another restless sleep to write down what he'd dreamt again.

Kingston University's MA Fashion Show set standards high on the eve of London Fashion Week on September 15, opening with Nigel's dreams unfolding on stage in a contemporary dance piece which experiments with the very idea of fashion.

The MA show, entitled LIVE, was a culmination of years of hard work by some of the recently graduated crop of students who approached the craft of fashion design through a range of mediums, including a dance performance, a computer game and a range of catwalk collections. Nigel's bespoke costume pieces were worn during his performance, captivating industry experts in attendance before his peers' collections made their highly anticipated catwalk debuts. 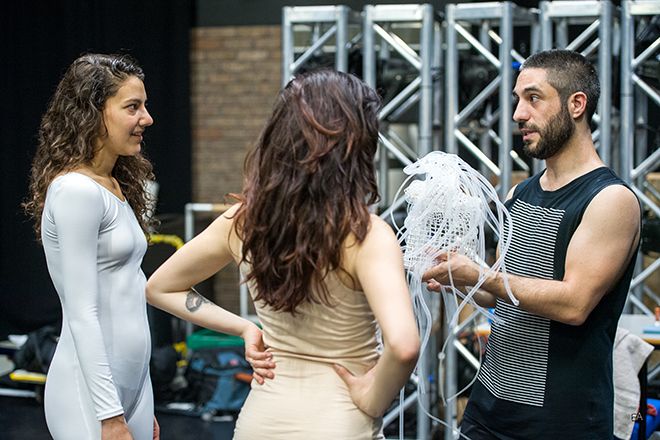 Nigel Guérin-Garnett instructs dancers ahead of his performance at the MA Fashion Show.Upon coming to Kingston University to study fashion, Nigel drew on 11 years of experience designing for the likes of lauded fabric editor Sabina Fay Braxton in Paris and luxury department store Saks Fifth Avenue, in New York. He felt the penny drop, however, when he realised that dancing was an intrinsic part of him and therefore an essential part of his range. "I think at this level you need to figure out your identity as a creative person - you must continually question yourself in order to respect that truth," he said. "I started dancing at the age of six and it's such an odd thing - you're not like an artist or a writer who can put the paintbrush or the pencil down, it's in you all the time. You dream in dance and you cannot separate yourself from it.

"I like that the course at Kingston University isn't just about making a collection too - it recognises that fashion needs an injection of something which is what I've tried to bring."

Describing his studies as a 'cathartic' experience, Nigel realised he didn't have to separate his two loves when his vivid dreams marked the beginning of his project, which takes its name ‘344|142' from the times he woke up and jotted his visions down. "You're trained to think of things as separate, categorical entities and the world certainly functions that way a lot of the time, but I started to realise it's okay to still think about dance and it doesn't have to be so separate from fashion," he said. "There's often visuals, music, choreography and costumes involved in a performance and I realised that giving each equal weight produces more interesting, in-depth outcomes."

The performance, which Nigel has partly funded through his gofundme page, involved four classically trained dancers, headpieces, garments, video projections and a movable set. The piece was choreographed by the student into four movements.

It centred on the themes of discovery, exploration, acceptance and celebration, as the audience followed the journey of other-worldly beings unearthing a new place in a bizarre setting. "I like the fact that the piece is abstract without being inaccessible - the title doesn't give away too much and there are real mathematical patterns in the moves that give it a specific aesthetic. The costumes really enunciate the dramatic movements you see," Nigel explained.

Kingston University's MA Fashion course leader Andrew Ibi said Nigel was part of a diverse cohort of students who are challenging conventional processes in the industry. "He is an excellent example of fashion's ability to live outside its traditional setting," he said. "His work as an art director bringing together dance, costume, millinery, movement, presentation and film is offering the chance for fashion to explore new ground." 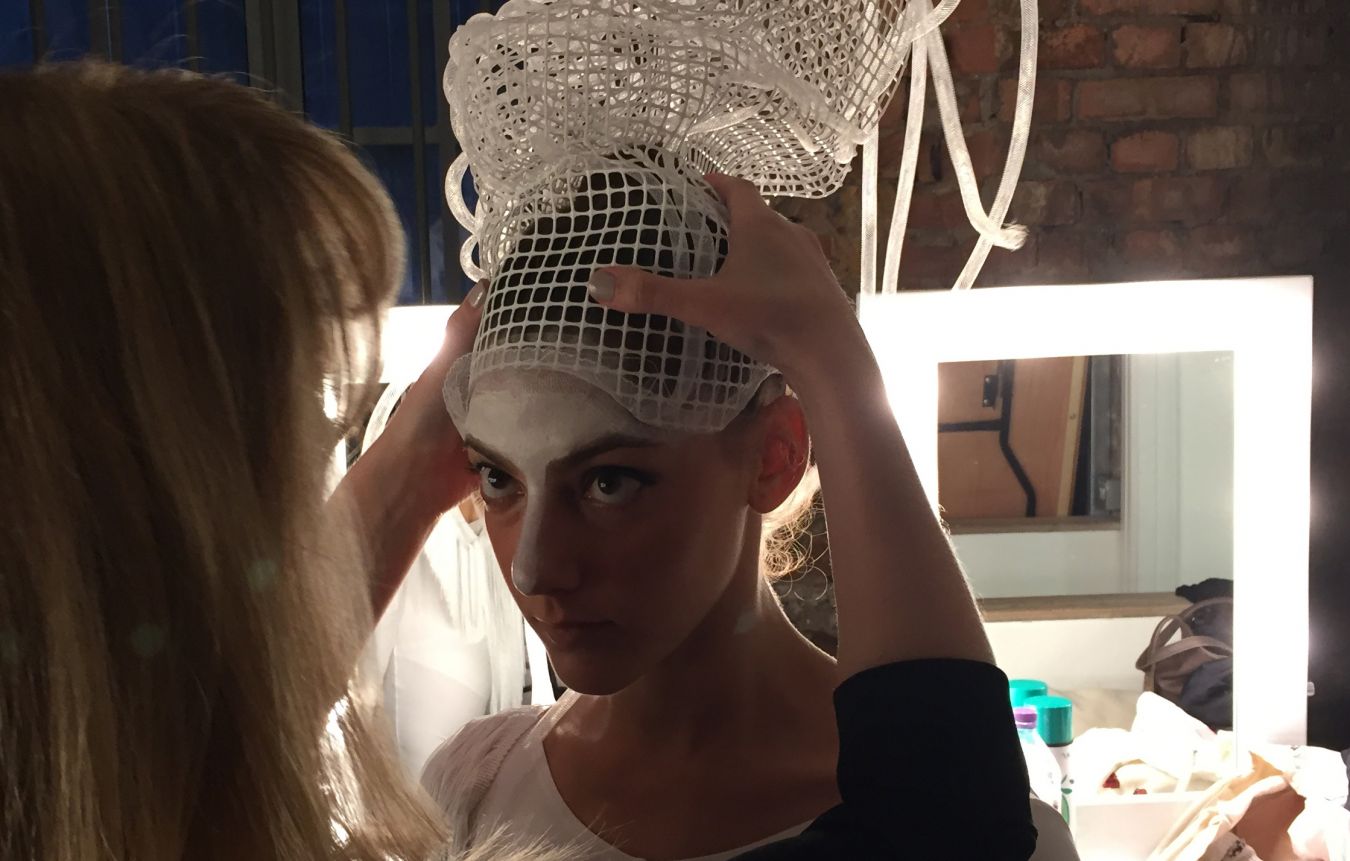 One of the dancers wearing Nigel Guérin-Garnett's designs prepares for the performance at Kingston University's MA Fashion show.