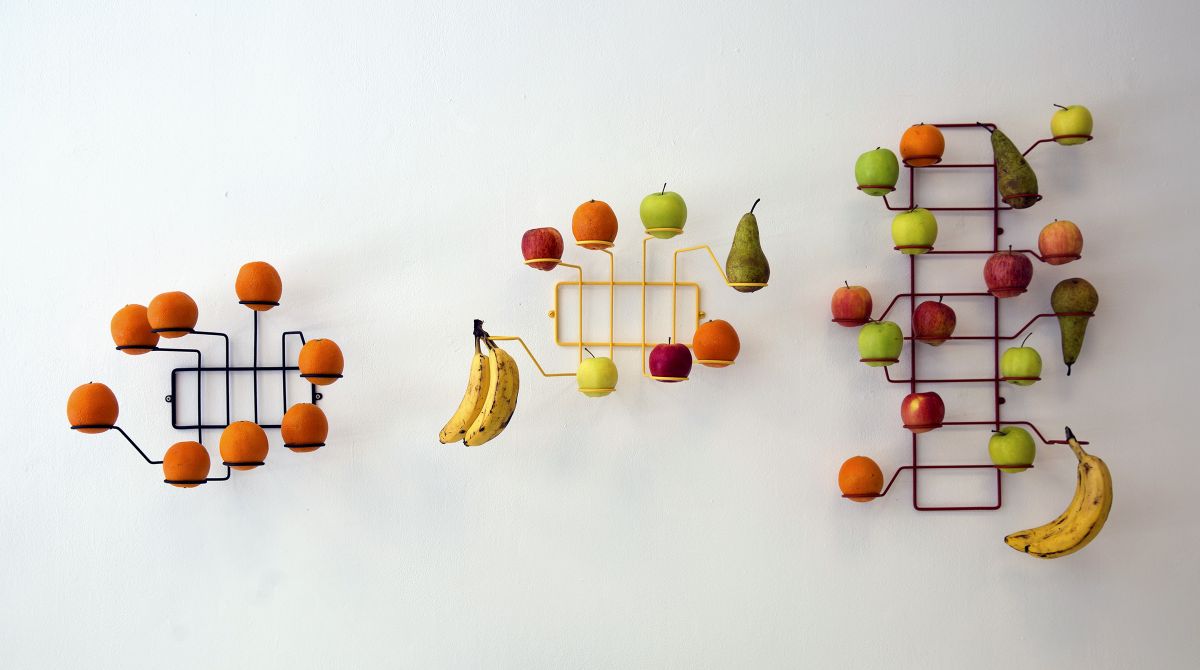 With fruit and vegetables at the forefront of the battle for healthy eating a Kingston University student has reinvented the fruit bowl after becoming dismayed at the amount of fresh food wasted in the modern home.

The wall hanging product, named Fruitopia, is designed for people on the move. "I picture it hung by the front door - you leave the house, grab your keys, coat, wallet and a piece of fruit. It's easily accessible - like picking fruit from a tree," explained its creator BA(Hons) Product and Furniture Design student George Woolley.

George's love of food planted the seed for an idea for his final year project. "I was frustrated at the amount of food I was wasting, particularly because as a student, I was often cooking for myself,"he said. "I want to revolutionise how fruit and vegetables are presented in the home, and make it easy to see how much you have left," the 23 year old from Darley Dale, Derbyshire said.

The modern minimalist approach to kitchen design may have altered eating habits especially with people living in smaller apartments with less space for kitchen worktops, George said. "The modern kitchen hides things away, with beautiful sleek fridge freezers and cupboard fronts, everything is deposited tidily in its place. It's very easy to forget what we actually have and to overbuy," he said. 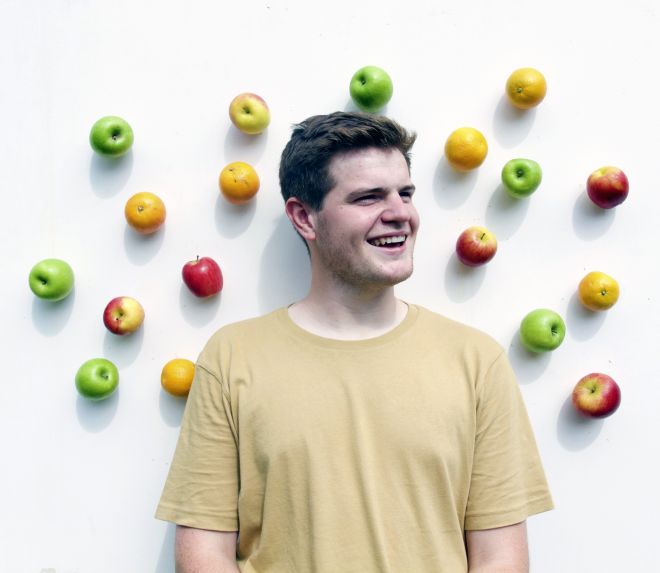 George Woolley hopes his wall hanging alternative to the fruit bowl leads to less food wasteGeorge's research found the fruit bowl to be one of the main culprits of food waste with newly purchased bananas, apples and pears piled on older fruit left forgotten, bruised or squashed. "My focus was to give people the opportunity to display their fruit in a different way," he explained. "One challenge was to present the fruit beautifully with a simple frame showing off the natural forms and colours of the fruit itself. "

Pedro Barra, Nutrition BSc(Hons) course director at Kingston University said while the target of at least five daily portions of fruit or vegetables is widely known, a recent NHS digital report showed only 26% of adults were achieving that aim. "The question becomes how do we make people reach at least five portions a day? Perhaps if fruits and vegetables were more visible in the home, it would encourage greater consumption and reduce food waste," he said.

"George's prototype makes fruit more visually attractive by highlighting the shapes and colours. Phytochemicals are responsible for giving fruit its colours but simultaneously also offer potential health benefits such as the reduction in the risk of chronic disease, specifically cancer and cardiovascular disease," Dr Barra explained.

The fruit display is influenced by the iconic work of mid-20th Century designers Charles and Ray Eames, particularly their quirky clothes hooks, Hang It All. Fruitopia echoes the playful and perennially popular design classic - George's design replaces the Eames' brightly coloured coat hooks with spaces for fruit, giving the owner the opportunity to add colour as well as a healthy snack of their choice to the accessible unit.

Like the change George has envisaged for the fruit bowl, the faculty at which he studied is also undergoing a process of re-imagination. In a return to its origins, Kingston University's Faculty of Art, Design and Architecture will be known as Kingston School of Art from September 2017. The new name reflects the faculty's legacy in an era when original thinkers are highly valued in the rapidly growing creative and cultural industries.

Head of product and furniture design at Kingston University Phil Davies said George's project gave a new and innovative twist to a familiar everyday object. "Fruitopia encourages healthy eating by making fruit accessible in unexpected places like the hallway or living room," he said. "We encourage Product and Furniture Design BA(Hons) students to find solutions to the problems modern life throws at us. George has produced a simple and stylish way to combat food waste and encourage people to eat more fruit," he said. 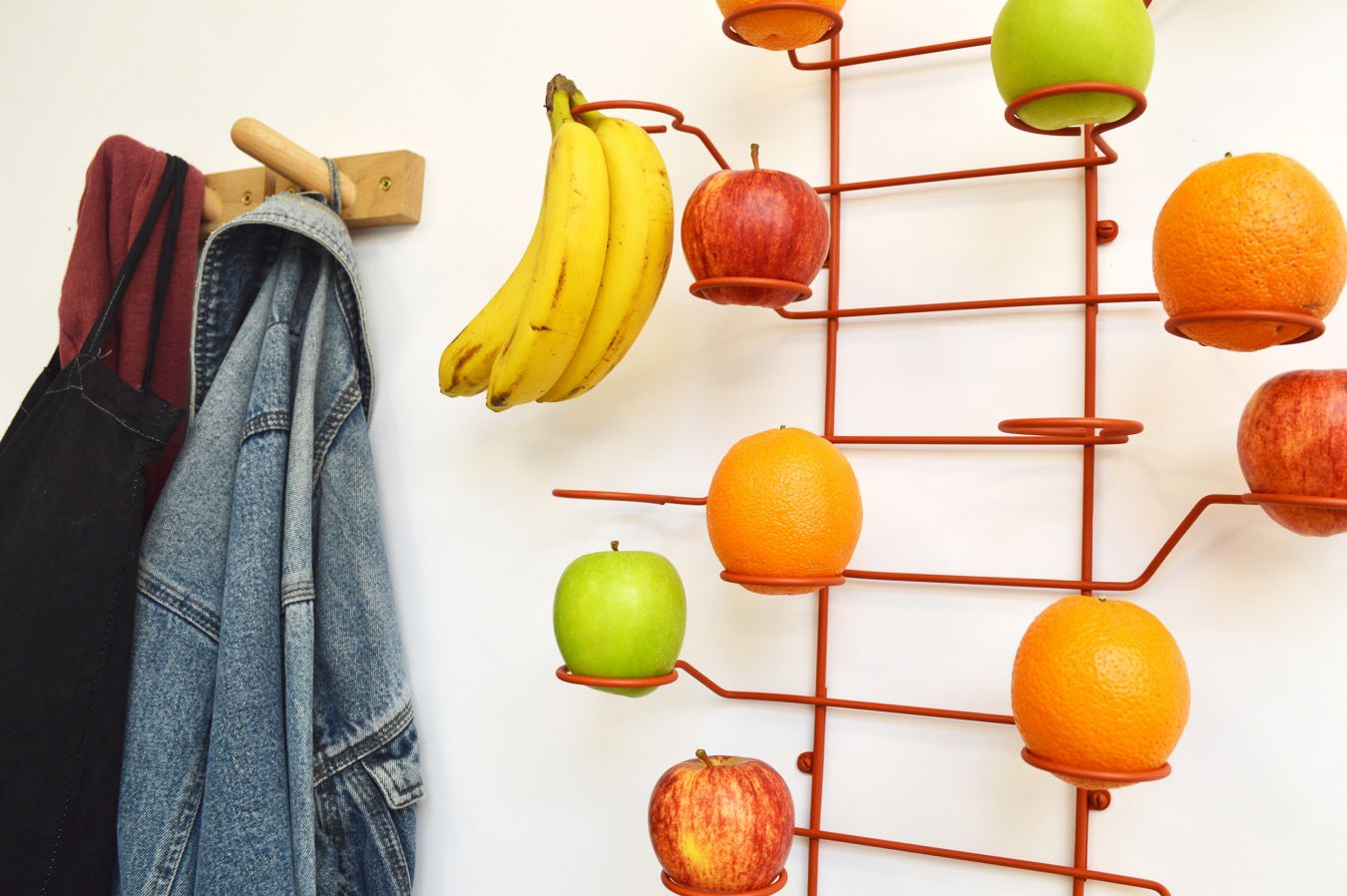