2017 round up: A year of success for Kingston University alumni 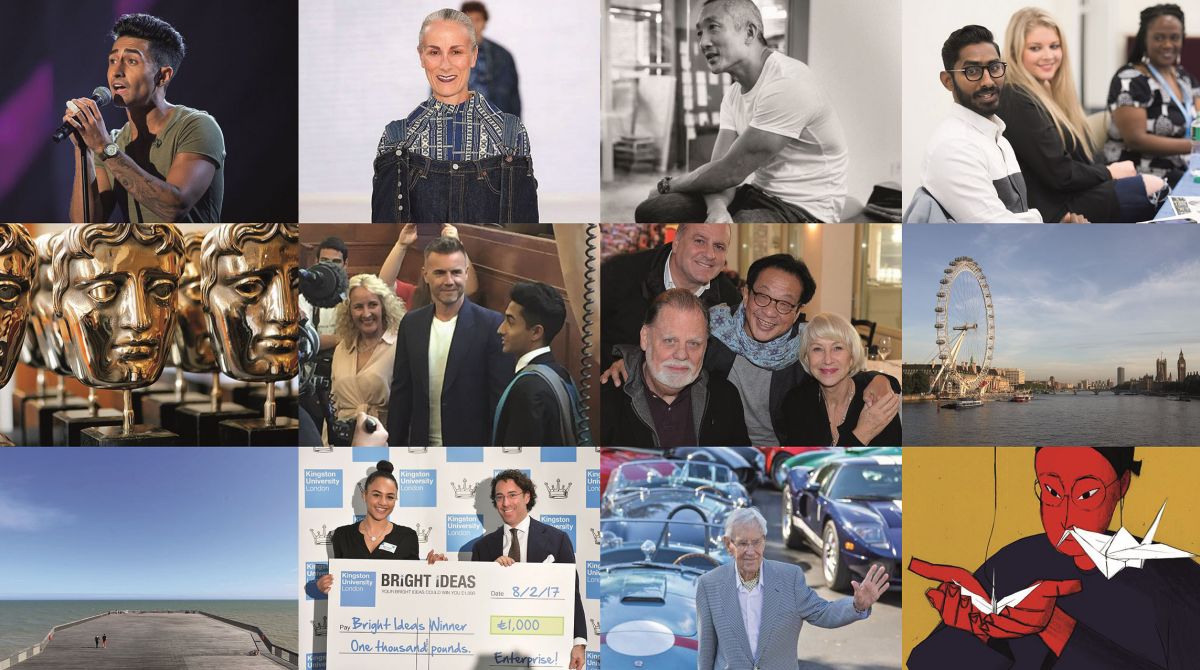 From Hollywood Film Festival awards to BAFTA Nominations and OBEs, 2017 proved to be a memorable year for Kingston alumni. Across the globe, graduates were recognised for their skills, talents and contributions to their fields and we've shared just some of the highlights below. 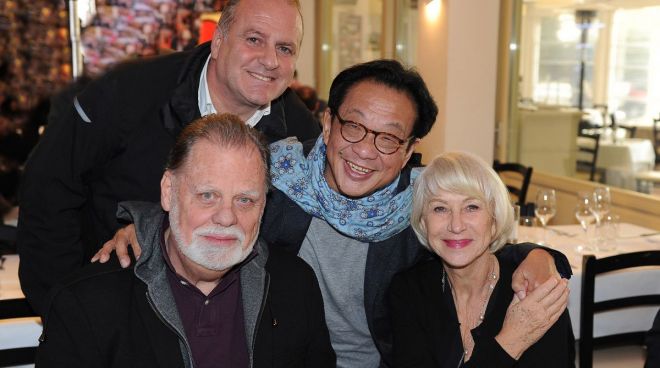 We celebrated the achievements of more than 2,500 students as they joined the alumni family at the winter graduation ceremonies, where alumnus and award-winning author Nick Hornby (Postgraduate Certificate in Education, 1981) was awarded an honorary degree in recognition of his outstanding contribution to literature. 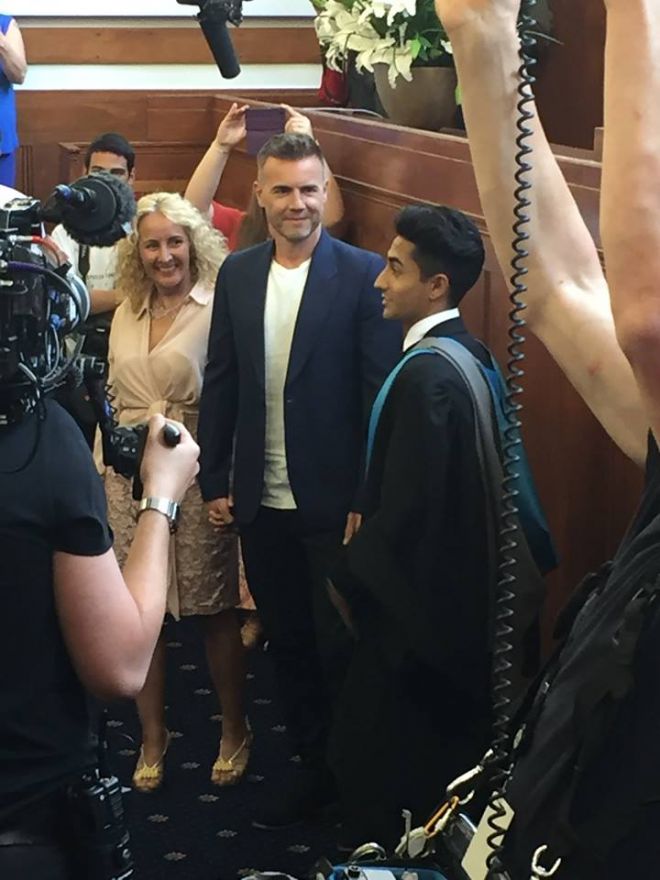 Gary Barlow visited Anthony Sahota's graduation, much to the delight of Anthony and mum Caroline.In February, alumnus Anthony Sahota (Mechanical Engineering, 2017) stepped into the spotlight on BBC 1's Let It Shine, after a surprise graduation visit from Gary Barlow. We also saw some of our notable alumni return to campus to hear students pitch their business ideas in a Dragon's Den-style entrepreneurship competition, Bright Ideas.

March saw the start of our spring telephone campaign, where Kingston students had more than 1,400 conversations with alumni. You shared your advice and invaluable knowledge - as well as donating a record-breaking £83,965 to the Inspire the Future fund.

As the year moved into spring, April saw a host of alumni return to campus to share their insights with students. Six alumni shared their stories of overcoming challenges at our Successful Failure event, and alumnus Mark Walton (LLB, 1996) hosted an Upgrade Masterclass on LinkedIn. Kingston alumni made up two of the ten teams pitching their business ideas to the Mayor of London at a prestigious contest, while alumna Lili Giacobino (Product and Furniture Design, 2011), successfully revamped a waiting room at Kingston Hospital with 11kg of Lego, in an effort to reduce patient stress and encourage positivity. 21 alumni also reunited for a dinner in Dubai.

In May we celebrated our partnership scheme with Santander University, which has provided more than £350,000 of funding for Kingston University programmes, scholarships and internships benefiting thousands of alumni, students and staff. Alumna Kate Clark's (Fashion, 2017) collection was unveiled at Graduate Fashion Week, and we hosted a reunion of alumni in Mumbai. 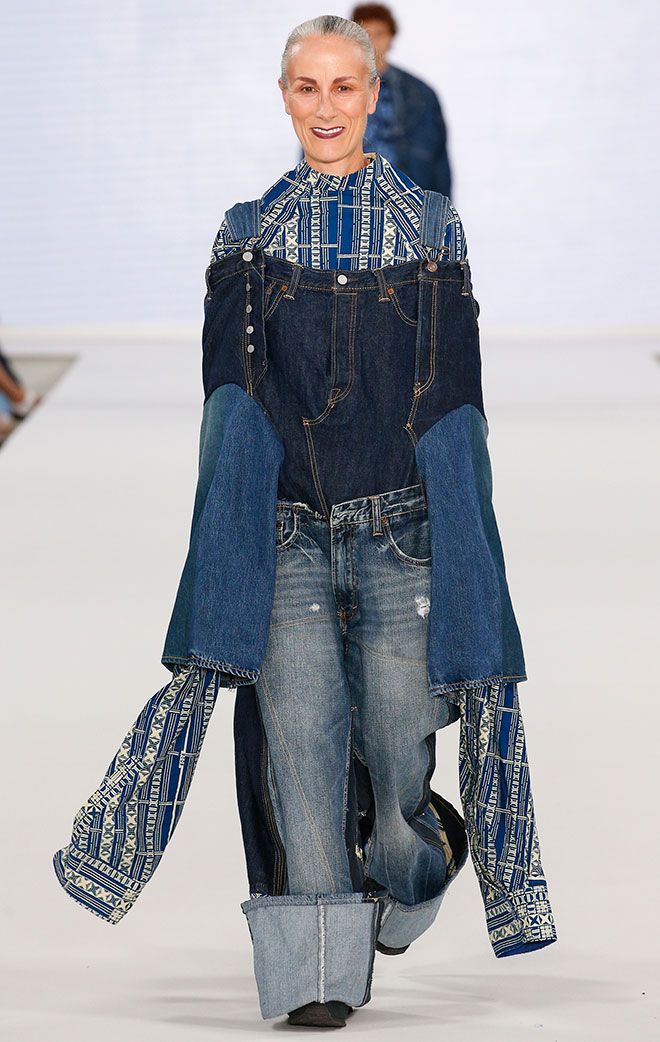 Later in the month, alumna and Olympian Asha Philip (Drama, 2012) encouraged students to dream big while on Kingston University's Sports Performance Programme, and Magdalena Huber (Creative Practice, 2015) designed a headline-hitting backpack that calls for safe and responsible drinking at festivals.

In July we visited West Africa for an alumni reunion in Ghana, while back in the UK we celebrated the achievements of more than 3,500 graduating students as they became alumni. We also awarded alumnus Mel Ewell (Geography, 1981) with an honorary degree in recognition of his services to business and outstanding contribution to Kingston. Former CEO of Amey PLC, Mel led a partnership between the firm and the University, offering work placements and employment to promising students.

A virtual reality set created to help people with dementia was created by two Kingston alumni in August, and alumna and current PhD student Rose Turner presented her research into reading habits and personality types to the American Psychological Association.

September saw a new term at Kingston University, and a fresh cohort of students arrive on campus. 11 alumni joined us during induction week to meet our new postgraduate students, and a record-breaking 87 of you signed up to mentor a student at Kingston. It was also the month we launched the KU Big Read: Alumni Chapter, where nearly 100 alumni joined to read along with Kingston students and staff, while supporting the Big Read project and providing bursaries to students leaving care. Fashion graduates secured positions at leading brands such as Chanel, Banana Republic and Stella McCartney, and we celebrated the phenomenal life and career of alumnus Royston Lunn (Mechanical and Aeronautical Engineering, 1954), known as the ‘Godfather of the Ford GT40'. 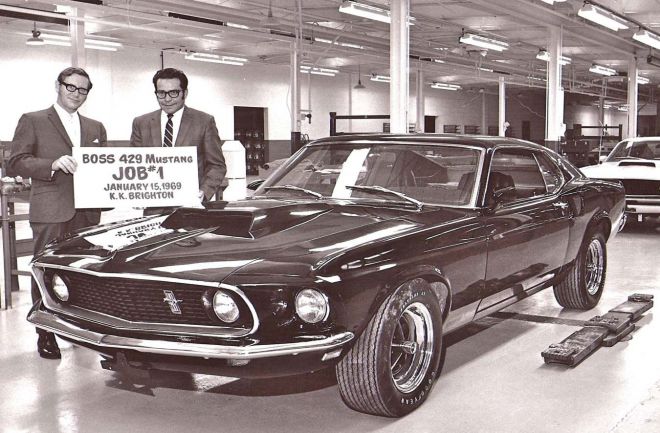 Royston Lunn (left) and Fran Hernandez, with the Boss 429 Mustang, which he oversaw production of.Also that month, a group of students were involved in a life-changing volunteering expedition to India facilitated by the Lebara Foundation, co-founded by alumnus Yoganathan Ratheesan (Aerospace Engineering, 1999).

We travelled to California in October, and visited alumni at their offices at Levi's HQ, Apple, PwC, HP and Silicon Valley Bank. While there they shared their advice on starting an international career, and we raised our glasses to all things Kingston at a reunion in Silicon Valley. Meanwhile, MBA alumni Vince Tallent and Peter Harkin visited us in Kingston to host the first Strategy into Practice seminar of the series. Later that month we sadly paid tribute to alumnus and architect of the London Eye, David Marks.

Five alumni joined the Enterprise Circle in 2017 to support budding entrepreneurs and enterprise education at Kingston, and in November, our circle members met to hear pitches from enterprising students. Luke Parlin and Zack Bloundele, known as Rebel Observers, successfully pitched their virtual reality game Miniature, and received £10,000 in funding from Kingston alumni.

Stefano Ciampolini, CEO of Renal Services and alumnus (Economics, 1993) also returned to campus in November, to share his insights into entrepreneurship in the healthcare industry. This year Renal Services continued their sponsorship, for the second year, towards our Bright Ideas competition in February 2018. 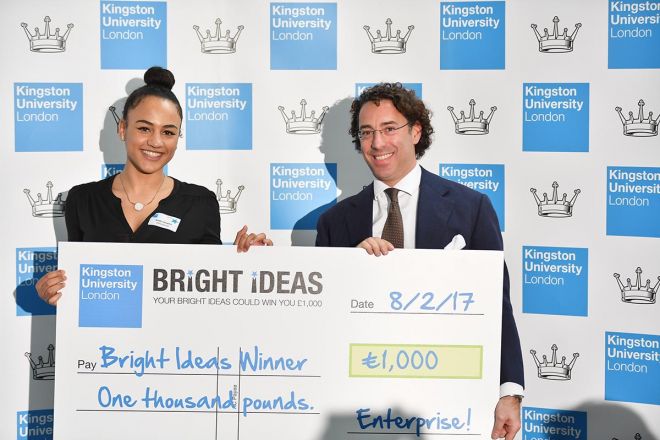 Stefano Ciampolini at the Bright Ideas competition with winner of the Science Category Nadja Howton.It was awards season yet again for alumni in December, as alumna and current postgraduate student Lynn Lock (Criminal Justice Studies, 2001), picked up the top honour at the Social Worker of the Year Awards. Simon Owen (Economics, 1990), CEO of Deloitte Switzerland returned to campus to host the final Strategy into Practice of 2017.

Tell us about your 2017 achievement. We know we've only scratched the surface of a whole wealth of exciting achievements for Kingston alumni in 2017. Share your stories by emailing us at alumni@kingston.ac.uk with your news.