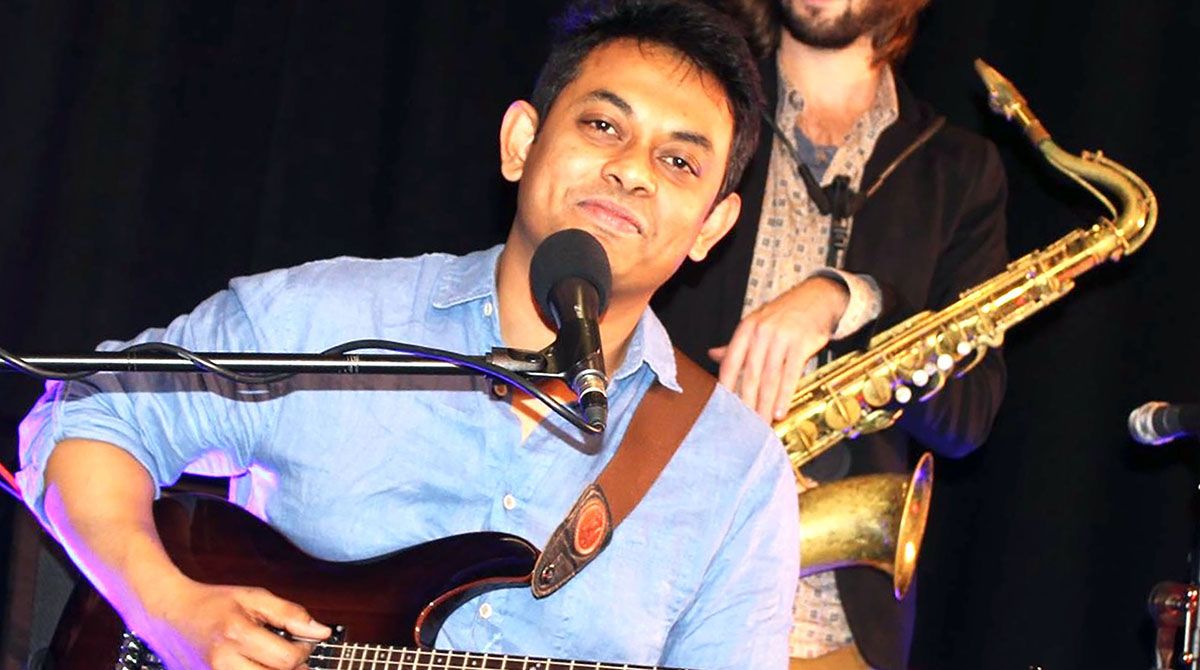 Ershad Alamgir is hoping to follow in legendary music producer Tony Visconti's footsteps after he graduates.

It was a chance conversation on a train which provided the impetus for Ershad Alamgir to finally drum up the courage and give up a secure position in the hospitality industry to pursue his true passion of producing music.

Despite a long-held aspiration to carve out a career in music, 40-year-old Ershad had never imagined he could actually make it happen. Ershad – who was born in Bangladesh but left the country at a young age – trained in Indian classical music from childhood. With a repertoire ranging from Indian classical music to western pop, rock, jazz and blues, he has performed regularly on stage, radio and television initially in Bangladesh but for the past 14 years in Britain, following his move to the United Kingdom.

Even with these impressive music credentials to his name, however, Ershad opted for a more traditional career and, after achieving a law degree and two masters' degrees in commercial corporate and human rights law respectively, he became a lawyer before eventually moving into the hospitality sector.

His heart just wasn't in it, though. In an attempt to remain connected to the world he loved, Ershad filled his spare time with a number of music-related activities including performing with his band, organising music festivals with Tower Hamlets council and working part-time as a TV presenter and producer at Channel S – a television channel for the British Bangladeshi community – but this left him tired and feeling even more unfulfilled in his day job. 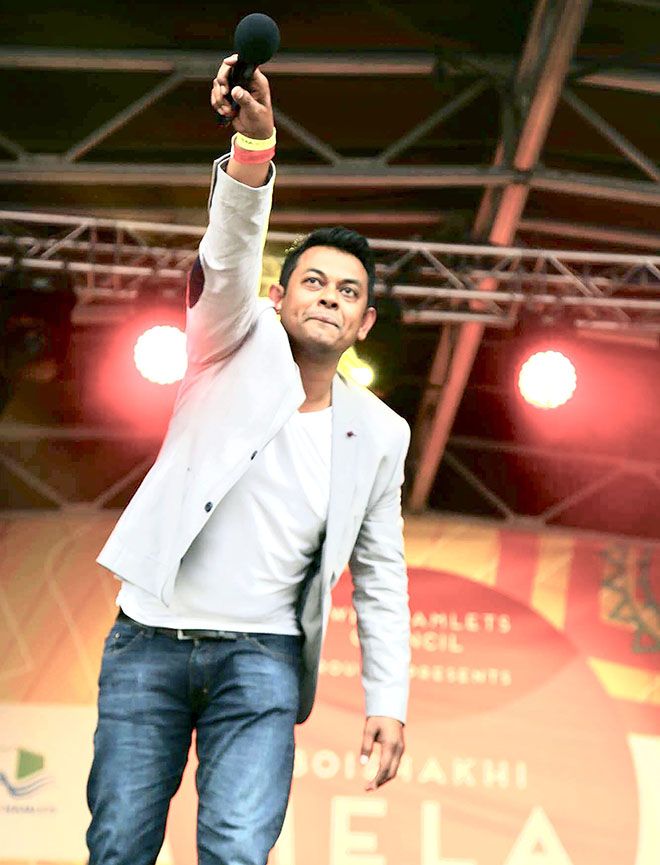 Ershad Alamgir has performed as a singer and guitarist for many years in both Bangladesh and Britain."Even though I had a well-paid, professional career, I felt I had no direction and wasn't achieving anything," Ershad explained. "I was doing the same thing every day and felt trapped." It wasn't till last summer however, while working as Reservation and Revenues Manager at the global high-end Hilton hotel chain, that Ershad received a piece of advice from the franchise's Managing Director that would prove to be the turning point in making that all important move towards the career he so desired.

"We were travelling back on the train together after work one day and I casually mentioned how I'd always dreamt of being a music producer and he took me aback by asking me outright what I was waiting for," Ershad said. "He told me that if I hung around, the right time would never come, I needed to do it now – and that really hit home for me. Sometimes you just need someone else to confirm what you already know in your heart."

Ershad hadn't been able to sleep that night, he said. "At three o'clock in the morning I finally decided to take the plunge and go back to university to study the right subject for me but, of course, I had missed all the application deadlines for the year," he explained. After finding out about Clearing, though, Ershad realised that it could give him a second chance so he had checked online what music production courses were available and emailed the relevant universities.

"I've been a practising musician for a long time and have extensive experience in live performances but always had to depend on other people in the studio so music technology was an area where I needed more know-how," he said. "Kingston University's course, in particular, appealed to me because I had read about the Tony Visconti Studio designed and set up by the famous music producer."

Just a few hours later Ershad received a phone call from the admissions team at Kingston University. "I was concerned that my lack of a formal music qualification would be a problem but the tutors were happy to accept videos of my live performances and the whole application process was completed amazingly quickly," he said. Within a week Ershad had enrolled on to the University's BA(Hons) Music Technology degree course. "The Clearing process at Kingston University was so easy and I found the admissions team really accommodating," he added. 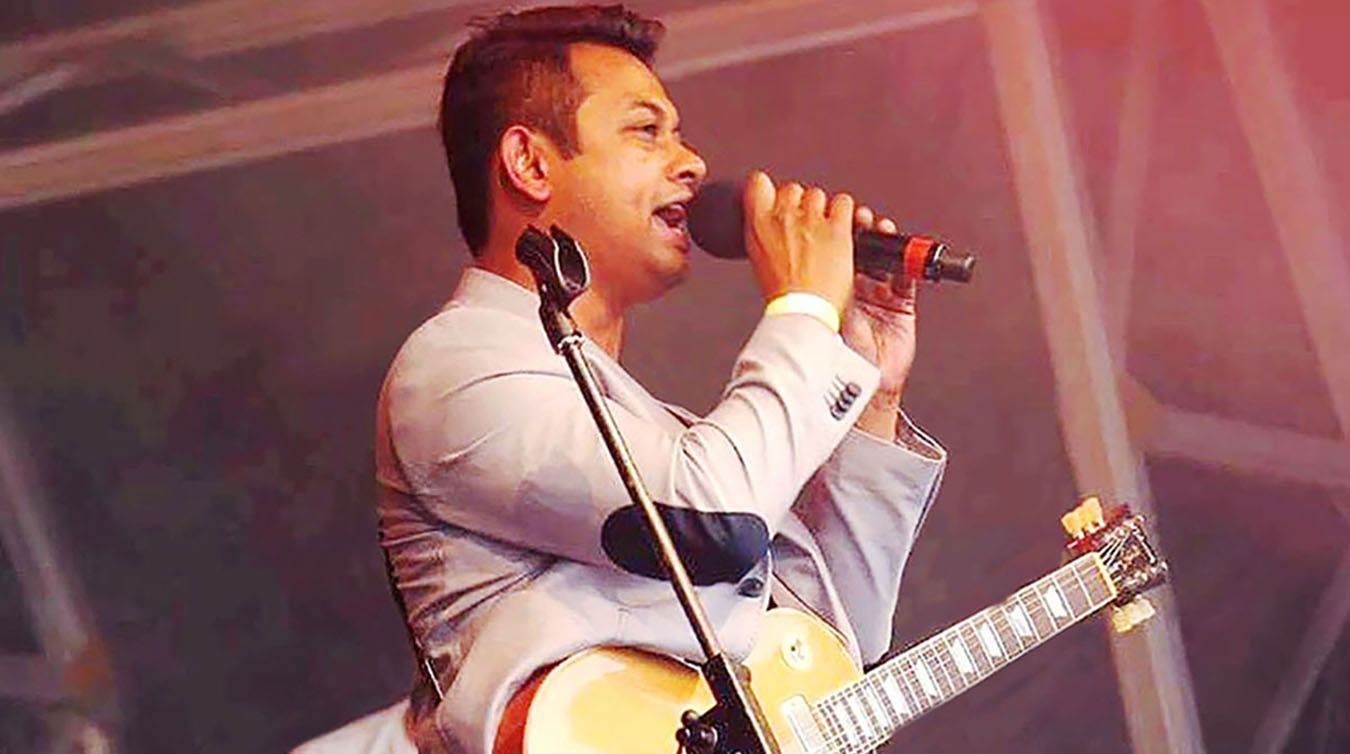 Ershad Alamgir has dreamt of a music career since he was very young.

Having now completed the first year of his degree, Ershad admitted he'd found some elements of the course challenging - but said there had been plenty of support on offer. "I've had a really good experience with all the department's lecturers who are always willing to answer questions and I'm learning something new every day." he said.

The icing on the cake has been learning from world renowned music producer Tony Visconti, who is a visiting professor at Kingston University. "In terms of music technology, Tony Visconti is one of my heroes, so to be able to learn from him has been incredible," Ershad said.

Senior lecturer in music and education officer for the Visconti Studio Alex Evans said Ershad had been a fantastic asset to musical life at the University. "His curiosity for the subject and desire to try new experiences have really helped him develop as a musician," he said. "He's also a great team player and works hard to create extra-curricular music opportunities for all students on the course."

Not one to give himself an easy life, alongside his degree studies and performing career, Ershad is also undertaking a diploma in neuro linguistic programming and life coaching. This time, though, the balancing act was worth it, Ershad said. "I have struggled for quite some time in my life to find the courage to follow my dreams so going back to university wasn't an easy decision. I had financial commitments and had to make sacrifices but the gamble has more than paid off," he confirmed. "My ambition to become a music producer is within reach and I feel I have a purpose now."