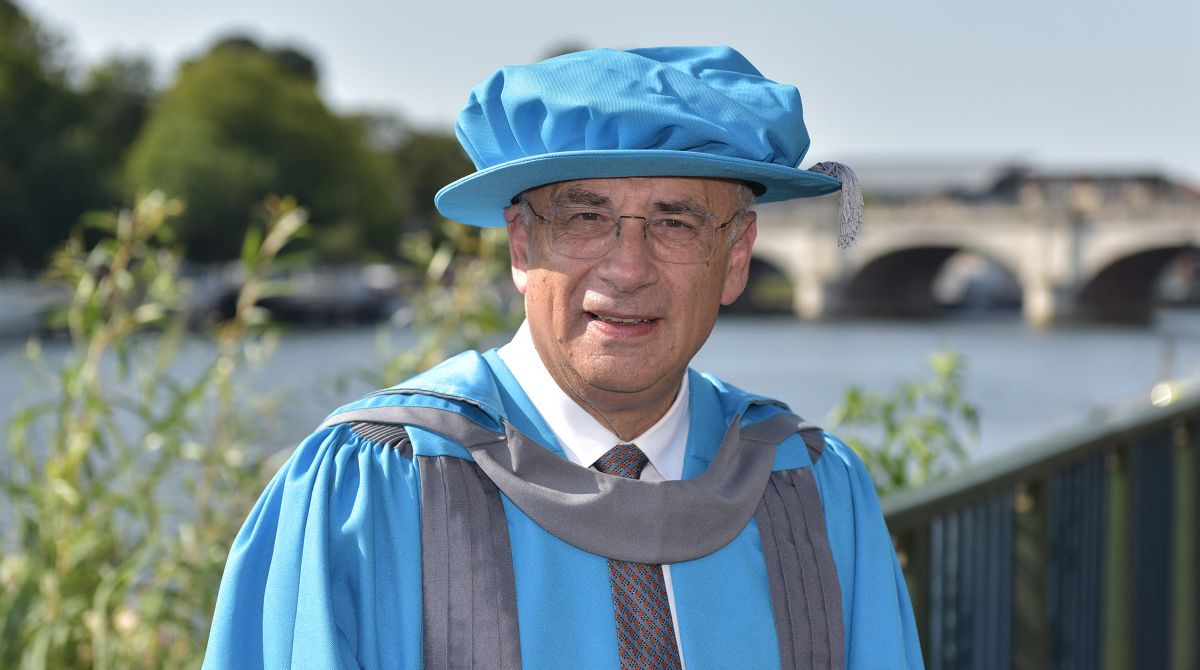 Sir Brian Leveson was presented with an Honorary Doctorate of the University by Kingston University during a graduation ceremony at the borough's Rose Theatre.

Sir Brian was presented with an Honorary Doctorate of the University during a graduation ceremony for the University's Kingston School of Art at the Rose Theatre. The award recognised his outstanding contribution to the public understanding of journalism – having chaired the landmark Leveson Inquiry in to the culture, practice and ethics of the press – alongside a distinguished career in the field of justice.

Addressing graduands at the ceremony, Sir Brian stressed the importance of hard work as he reflected on his own career. "There is no substitute for doing the work, in whatever field you care to operate," he said. "I used to say that I would always make sure that when I went into court to argue a case, I knew more about the case than anyone else. Don't just try to wing it. It may work once or twice, but you will be found out and your reputation will suffer as a result."

Appointed President of the Queen's Bench Division of the judiciary in 2013, Sir Brian was also Head of Criminal Justice in England and Wales from 2017 until his retirement last month. Having worked as a barrister and Queen's Counsel before becoming a judge, his involvement in judicial management led to him being appointed Chairman of the Sentencing Council, which resulted in the development of a new approach to guidelines for sentencing. He later also conducted a review into the efficiency of criminal proceedings.

In a career that had seen him prosecute or preside over high profile cases such as the serial killer Rosemary West, it was his leading role in changing the country's approach to sentencing that stands out as one of the particular highlights for Sir Brian. "In relation to sentencing, it used to be that we would look only to previous decisions of the Court of Appeal, whereas now the approach is very much driven by the guidelines," he said. "They are clear and can be understood by all – so that not only judges, but lawyers, police officers, victims and the general public can read them and see how the judiciary approach sentencing. Crucially, it means the same approach is taken whether you are being sentenced in Bolton, Birmingham, Bristol or Basildon and that consistency has to be a good thing."

His most prominent role, however, came after he was appointed by then-Prime Minister David Cameron to chair a public inquiry set up in the wake of the phone-hacking scandal. Running from July 2011 to November 2012 – and hearing evidence for more than eight months of that time – it explored the media's relationship with the public, politicians and the police.

The evidence from the inquiry's 198 public sessions, along with witness statements and submissions, have now been made easily accessible to the public through Kingston University's Discover Leveson website, an online archive launched late last year.

Seven years on from the publication of the inquiry report, Sir Brian spoke of the importance of maintaining a record of its findings, ensuring the evidence and its lessons would not be forgotten. "The inquiry is a piece of work of which I'm extremely proud and it sits there as a record of how the press operated in the early years of the 21st century," he said. "The great thing about Discover Leveson is that it has made it accessible. Students of journalism, researchers and anyone interested in its findings can read or watch the evidence and read the transcript, statements and submissions and the report itself. It's a wonderful resource."

Reflecting on the power of the press and the judiciary to alter people's lives, Sir Brian also spoke of the advice he gave new judges on their appointment. "When I presided over their swearing in, I would say that they had taken an oath to conduct all hearings without fear or favour, affection or ill will, but I would add that a judge also required humanity and humility," he said. "It may truly be the case that the most important person in court is the person likely to lose, as they have got to feel they have had a fair crack of the whip, a fair hearing."

Kingston University's Professor of Journalism Brian Cathcart said the award recognised a 50 year career of public service that led to the very top of the justice system. "Sir Brian produced a report that I am convinced provides us with by far the best roadmap we have ever had towards better, fairer and more ethical journalism in this country," he said. "Significant as that is, the Leveson Inquiry was just one episode of a long career.

"I have spoken to and read comments by a number of legal professionals who confirmed the thoughtful and fair-minded figure we saw in the inquiry was the same person they knew as a judge and colleague. In honouring Sir Brian we show our commitment to the rule of law and say to the world that fairness, humanity and kindness are virtues we respect and aspire to."