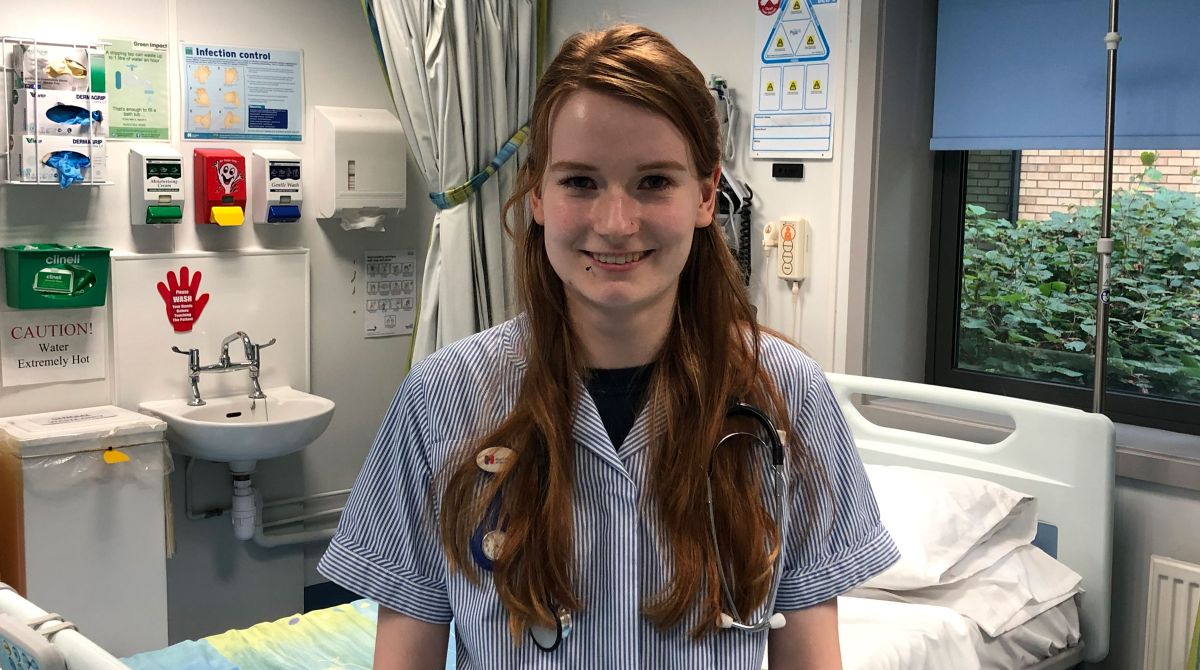 When calling Kingston University's clearing hotline two years ago, Katie Needham was nervous and concerned her tone of voice and everything she said could count against her as she looked to secure a place on the BSc Adult Nursing (Hons) course. However, as she found out one year later when being a hotline operator for Kingston University on the other side of the call, things couldn't be further from the truth.

This week, tens of thousands students will find out their A-level and BTEC results, with many calling Clearing hotlines to confirm their university places and apply to snap up one of the few remaining spots on degree courses, particularly those who have changed their minds about what course they want to study and those who have narrowly missed the grades they hoped for.

Katie was one of those who changed her mind after originally planning to study music production but eventually decided on her childhood passion of nursing. After going to school to collect her A-level results the 21-year-old, whose passion in nursing began when getting a toy doctor's kit for her fifth birthday, ran home and immediately called Kingston University's Clearing hotline. "I didn't have to wait long to speak to someone. The operator asked me a few questions and then put me through to a really helpful nursing Admissions Tutor, who told me more about the course and the interview process," she said.

Katie admitted feeling anxious when she called the University but was soon put at ease by the specially-trained operator, some of whom are current students. "When I called I thought the way I spoke or anything I said would count towards whether I would be offered a place but the person I spoke to was so friendly and wanted me to succeed so it was a really good and easy experience," she said. "I would recommend to anyone thinking about calling the hotline to just go for it – it's the best thing I've ever done," she added.

At the end of the phone call Katie was offered an interview for a place on the adult nursing course in the Faculty of Health, Social Care and Education, run jointly by Kingston and St George's, University of London, and was successful – she's now gearing up for her third and final year of her course.

She also works as a student ambassador and last year was on the other end of the phone line working as Clearing hotline operator. "It was really eye-opening answering calls to people who were in the same position as I had been just a year before. It made me realise there's nothing to be scared of because the person taking your call is rooting for you and isn't trying to trip you up," she said.

The student, who lives in Weybridge, in Surrey, drew inspiration from her radiographer cousin's stories about working for the NHS and chose Kingston University because of its highly-regarded reputation for nursing training within the profession and knowing she already liked the area –including its vibrant nightlife and music scene - having lived locally.

The commuter student – who called the dedicated inter-campus University bus service ‘a lifesaver‘-, has been helped with the transition to higher education by her personal tutor. "Stepping up from A-levels was a big jump but I've learnt how to ask for help, as I used to be shy," Katie said. "The support I have received has been amazing – from placement issues to problems I had at home, they have helped me through all of it," Katie added.

The flexible nature of the University's nursing degree allows undergraduates to focus on particular areas of their career, something which has enabled Katie to work in acute medical units, accident and emergency and intensive care. "I did a placement in the acute assessment unit at Kingston Hospital and it was my favourite so far," she said. "My mentor on the placement was brilliant and we still keep in touch. It's really ignited my passion for that particular area of nursing and made me realise what I want to do when I graduate," she added.

Katie's personal tutor, senior lecturer in nursing Teresa Marshall says she has seen the student develop professional and a person since starting at Kingston University. "In her two years at Kingston, Katie has continued to develop both academically and professionally. She has succeeded in complex NHS placements and demonstrates the maturity necessary to reflect on her performance and seek support if required," she said.