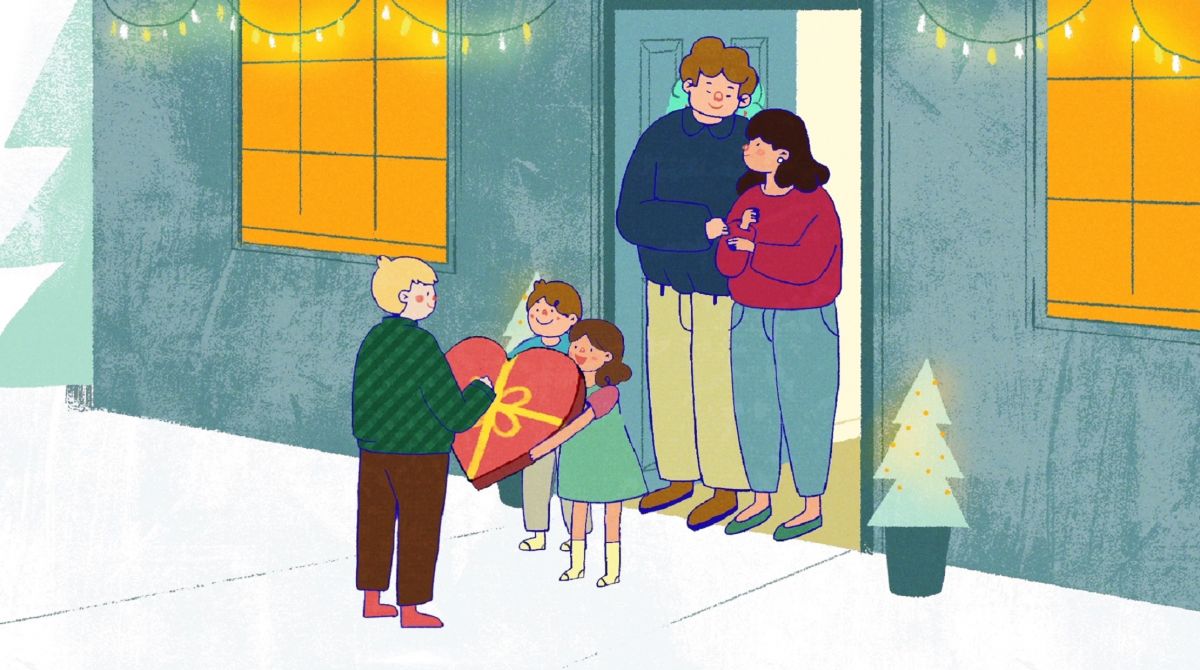 The footage tells the story of a beautifully wrapped present on a journey from a child's Christmas tree to a grateful family in need by a selection of animated characters.

John Lewis and Waitrose and Partners have recruited four Kingston School of Art Illustration Animation BA (Hons) graduates to produce a 30-second advert encouraging the nation to raise much-needed funds for charities Home-Start and FareShare. The much anticipated advert signals the run up to the Christmas period and is a key element of the retailers ‘Give A Little Love' campaign aimed at making a lasting difference to some of those affected by the pandemic in 2020.

The footage tells the story of a beautifully wrapped present on a journey from a child's Christmas tree to a grateful family in need by a selection of animated characters. Inspired by the kindness of the British public during the pandemic, the advert reinforces the message of caring for others throughout the festive period, with information on how people can donate to support the two charities.

Recent graduates Leksey Lee, Bella McEvoy, Amelia Fowler and Marta Pinto were chosen for the project following a nationwide call for talented students from advertising agency adam&eveDDB. The four, who completed their Kingston School of Art degrees in the summer, created the 30-second animation during an intensive three-week burst of activity, with the client a tightly guarded secret right up until a few days before the advert's release.

With final year students up and down the country unexpectedly finding themselves completing their studies while contending with lockdown, John Lewis and Waitrose were keen to support new graduates taking their first steps into the creative workplace this year. The four graduates selected found their skillsets aligned perfectly. They divided the work and supported each other over Zoom conference calls and late night Facebook video chats while burning the midnight oil to meet the agency's deadlines. 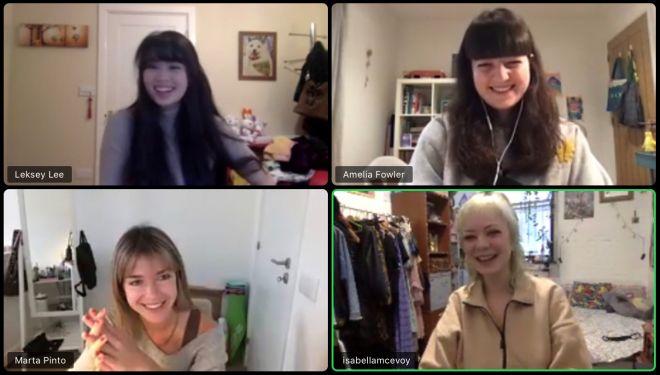 The graduates exchanged ideas via video chats during lockdown.The advert showcases their different styles while developing a visual storyline to tug on heart strings and encourage donations. Amelia's playful animations combine with Leksey's bold use of colour and flat shapes and Marta's cartoon-like, graphic-influenced work. While some of the scenes were shot on an iPhone in Bella's bedroom, she also returned to the studios at Knights Park campus to film a section of the stop-motion animation.

The graduates presented 50 characters to the agency with 11 selected for the short film. Bella was tasked with designing the final family-based scenes. "I was inspired by Raymond Briggs' classic short film The Snowman to use soft pastel colours and rounded lines," the 22 year old, from York, explained. "I used a hand drawn approach, sketching the characters with a lot of texture before finishing them on Photoshop. We wanted to make the backgrounds simple and clean so they didn't draw attention away from the characters."

Collaboration was vital for the project to be completed on time, with none of the graduates having worked on such a large scale campaign before. "The mixing of our artistic styles reflects the sharing aspect of the advert," Bella said. "I really enjoyed using crayon drawing and paper cutting on the animation. Marta worked on the run cycles at first, but we all helped out where we were needed. Amelia's style really stands out and, even though I designed the final scene, Leksey's animation ties it all together."

The graduates worked under acclaimed director Oscar Hudson, who has produced award-winning music videos for Radiohead and Bonobo as well as collaborating with brands like Apple and Nike. Kingston School of Art lecturers Rachel Gannon and Stephen Brown completed the team, helping the graduates realise the director's vision, liaising with the agency and passing on their industry expertise.

Ranked as top in the country for two successive years for design in the Guardian University Guide, Kingston School of Art is well known for producing outstanding illustrators and animators. "Our course teaches illustration animation together - students can specialise in one area or become a practitioner working across the two," Ms Gannon said. "The graduate team was asked to play a big part in designing what the advert looked like. While the concept was established by the agency and director, there was still a lot of scope to design how it looked, to develop character and emotion in the storytelling. The ability to work between animation and illustration for the graduates to develop their own ideas, creative language and way of visualising things was really key."

The four graduates have discussed the possibility of working together on further projects but have yet to decide how they might take that forward so early in their career and in the midst of the global pandemic. "It was strange to graduate in the pandemic," admitted 22 year-old Amelia, from Somerset. "We didn't have a goodbye with all our year group and we weren't able to hold the traditional end of year show because of the restrictions in place. This opportunity has given us a reason to come together again, making it even more exciting to work on such a prestigious project."

John Lewis and Waitrose are aiming to raise £4m for FareShare, which helps those facing food poverty, and Home-Start, which works with parents who need support. £1m will also be donated by shop Partners to charities supporting families in their local communities. The charities will use the donations to provide food, comfort, emotional support and advice to at least 100,000 families in need.