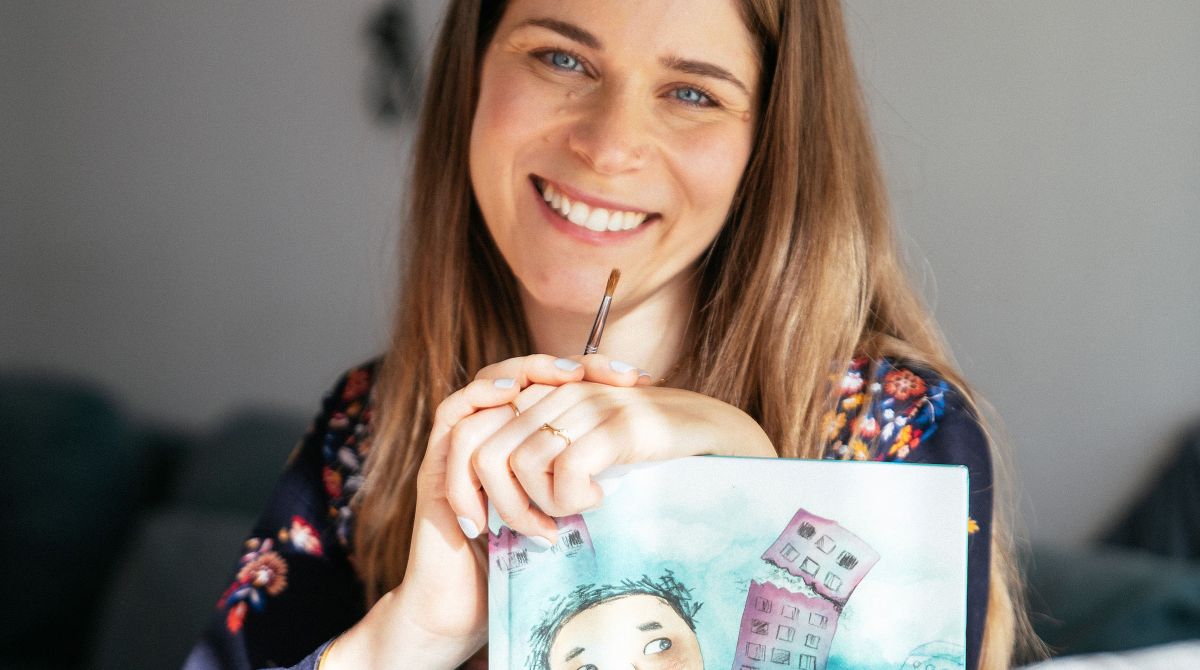 A Kingston University graduate, whose children's books champion inclusivity and have helped young people deal with trauma, has been included in the BBC's list of 100 inspiring and influential women from around the world for 2020.

Syrian children's author and illustrator Nadine Kaadan, who graduated with an MA in Communication Design: Illustration from Kingston School of Art in 2013, features in the list of inspirational women alongside politicians, scientists, activists, and actors who have made their mark this year.

The award-winning author, who now lives in London, said it was a ‘pleasant, beautiful surprise' to be placed in the same company as the Prime Minister of Finland, a US astronaut, leading scientists, and campaigners. "I feel honoured and particularly happy that this recognises the importance of inclusion in children's books – that these books should have different voices and children with different skin colours and backgrounds," she said.

Nadine, 35, has been passionate about writing and drawing since childhood, although she also credits her course and tutors at Kingston University for developing her creativity. She chose to study for her MA at Kingston School of Art because it offered a stimulating learning environment and range of specialist workshops.

"I wanted to focus on illustration to tell better visual narratives in my books, and the MA at Kingston offered amazing workshops to develop those skills," she said. "What was also good about it was that we were encouraged to work with students of other design disciplines to share ideas and learn from each other. I collaborated with a brilliant group of students from different countries and disciplines, from fashion to product design, and it was a stimulating and creative experience."

Nadine praised her tutors, including course founder Ian Noble, who sadly passed away halfway through her year at the University. "He believed that education should be interactive and he listened to what students had to say. He stimulated thought and ideas around illustration and creativity, and enabled us to reach our potential," she said.

Nadine, who was brought up in Syria's capital city Damascus, has written more than 10 children's books, some of which have been published in English. Through her writing and illustrations, she has championed the inclusive representation of children from all backgrounds and ethnicity so that every child can see themselves in a story.

"During my upbringing in Syria, I mostly read English or French books and there was nothing about our culture or heritage. This is when I felt it was important to have children's stories that show our culture and that children need to be able to recognise themselves in the stories they read," she said.

Nadine's book, The Jasmine Sneeze, touches on Syria's proud cultural heritage and the illustrations draw inspiration from the historic and beautiful city of Damascus, with its ancient fountains and arches.

Her book Tomorrow, written at the onset of the Syrian conflict, is about the daily life of a little boy during the war and Nadine has used her writing and illustrations to help mitigate trauma in young refugees in places such as Lebanon. "Storytelling in books can be very therapeutic for children; it helps them process their own emotions about their experiences and open up to others about them," she said.

Paul Postle, MA Illustration course leader, said that the MA helped Nadine to develop her visual storytelling and gave her the space and freedom to build the foundations for a successful career as an illustrator.

"Nadine was a particularly gifted illustrator and had the ability to tell meaningful and touching stories in a direct manner," he said. "Her imagery was gentle and creative, and her work relating to her home country was enchanting and thought-provoking. I'm delighted that she has got the recognition that she deserves."

• Find out more about the communication design: illustration MA degree course at Kingston School of Art