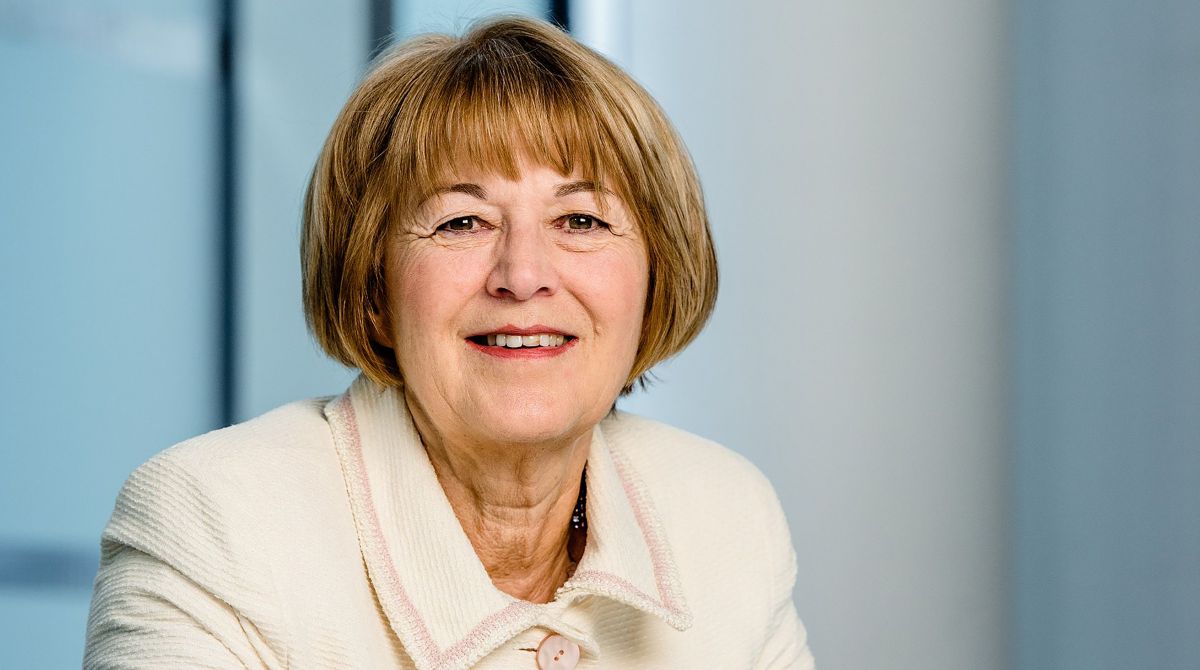 A British business leader who spent 12 years as chief executive of private healthcare firm Bupa and had a 20-year career with British Airways has shared advice with female business students, as well as recalling some of the barriers she faced and the role models who inspired her.

Val Gooding CBE, who studied a postgraduate Diploma in Management Studies at Kingston University - then Kingston Polytechnic - graduating in 1981, is currently the Senior Independent Director on the Board of Vodafone plc, having served as a non-executive director of Compass, BAA, J Sainsbury, Standard Chartered plc, and Tui, as well as being Chairman of Premier Farnell plc and Aviva UK.

A Trustee at the British Museum, the Rose Theatre Kingston, English National Ballet, and the Royal Botanic Gardens, Kew, she served as a non-executive on the boards of the BBC, the Home Office, and the Lawn Tennis Association. During her career, Ms Gooding was the recipient of several awards, was included in the Financial Times and Fortune lists of most powerful women and was appointed CBE for services to business in 2002.

"When I started out in the early 1970s at a junior level in British Airways (BA), there were no female managers at all in the company," she said. "I can still remember the sensation when the first one was appointed.  The culture was very male-dominated, there weren't any women role models, so young women had to be very determined. I didn't achieve my first senior management position until my early 30s, and experienced first-hand discrimination, such as not being allowed to apply for a position in New York because I was married, having less competent people who were male promoted over me, and being asked inappropriate interview questions like 'and what does your husband do?'. When a new CEO, Colin Marshall, arrived, and saw the dark suited 300 senior managers gathered together, he asked 'Where are the women?' There weren't any."

How did you overcome these barriers?

"Neither I nor similarly ambitious women colleagues complained about the obvious bias, as we recognised that in order to get on, we had to play a long game. Attacking the status quo wouldn't achieve anything, so I was patient, worked hard, tolerated lots of rejections but nevertheless achieved slow, steady career progress over the years.  Once I had achieved director level roles, running several subsidiary businesses for BA, I was always amused when people meeting me for the first time would ask 'are you a stewardess?'. When I left to become CEO at Bupa, people would ask me if I was a nurse. No disrespect to my nursing and cabin crew colleagues, but it was disappointing that it was never assumed I could be in a senior position.

"I had great opportunities during my last years at BA, and the climate for promoting talented women changed significantly because of the efforts of CEO Colin Marshall, and his successor Robert Ayling. Incidentally, once I became a CEO, I found that much of the prejudice disappeared - the high-status role spoke louder than my gender."

Who have been your female role models?

"There weren't any in my company, but I was inspired when I met Prue Leith and [Dame Stephanie] Steve Shirley, both early rare examples of successful women entrepreneurs. They suggested I should consider being a non-executive director, somewhere other than my main employment, and that advice sowed a seed which led to a varied and rewarding 'third act' of my career, where I have served on several boards, as a director and chairman. Another inspiration was Margaret Thatcher, becoming the first female Prime Minister in a party not renowned then for diversity, where she simply overcame prejudice by being exceptionally able.

"A further inspiration was a book, The Compleat Woman, by journalist Valerie Grove. It contains the stories of successful women who've also had long marriages and at least three children. I read it when on my (six week) maternity leave after the birth of my second son, and it really inspired me to believe I could return to my senior level job, and make a success of both career and family life."

What advice would you give to budding business women?

"First, always do what you love. Second, be determined, never ever give up on your goals, despite setbacks. Third, get qualified. The Diploma in Management Studies I did at Kingston, on day-release, gave me a really good foundation for my business career.  Also, read widely, be knowledgeable about businesses, sectors, and the wider economy.  Be aware of 'today's issue'. Fourth, go out of your way to make friends and allies among your colleagues.  All too often, women are very focused on results, and don't pay enough attention to building long-term alliances."

What impact can women leaders have within organisations?

"I've always tried to avoid glib or over-simplistic generalised assertions about women being 'better' than men as leaders.  I believe strongly that gender diversity strengthens an organisation, and that harvesting the best talent regardless of gender or ethnicity leads directly to enhanced performance.

"But it's true that we may have a more empathetic style. Whilst out on my lockdown walk today, I met someone who remembered working for me in the 1980s. She commented on the different styles of women managers, and said 'you were my inspiration'.  A humbling experience and one that all ambitious women should remember - we can multiply hugely our own impact if we inspire others to follow in our footsteps."