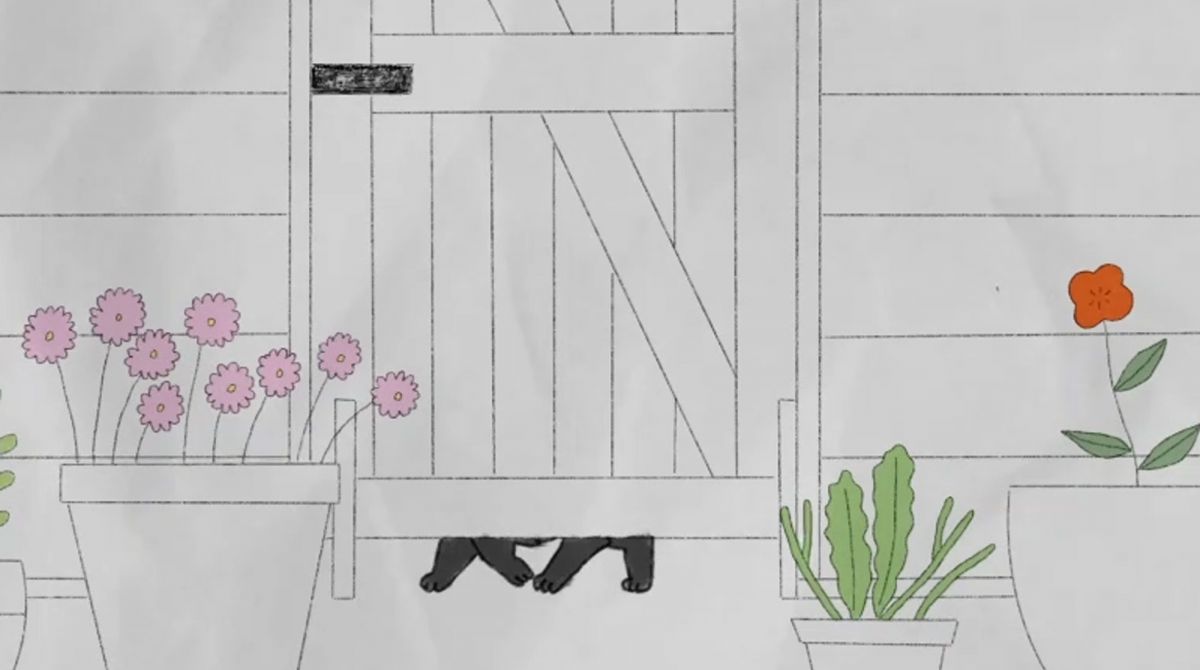 Two illustration animation students from Kingston School of Art have created a heart-warming animated film of a stray cat to raise funds for Cats Protection.

Potter, as the students named him, left quite the impression on third year undergraduates Sophie Buckley and Freyja Crisp when he frequented their garden last summer. They went on to produce Stray – A Lockdown Story for one of their final university projects, which looks back on the fond memories they had with their feline friend.

The students took the initiative to contact their local Cats Protection branch in Sutton and Kingston upon Thames to arrange for Potter to be rehomed and pitched the idea of producing a short film dedicated to their time with Potter to raise money for the charity.

Sophie and Freyja explained why they were inspired to capture Potter's story for their film project. "We wanted to create something to remember our time with Potter and to share the uplifting story of our stray cat, who had greatly impacted our lives during the pandemic. We hoped this may encourage others to reflect on their own positive experiences with animals during this period," Freyja said.

On top of raising funds, the art students said their film raised awareness about the importance of rescuing pets. "We hope the film will portray how equally strong the bond can be with a stray cat and highlight the value of adopting a cat over buying one," Sophie added.

Catherine Cottrell, Cats Protection's Director of Income Generation, commended the students for their fundraising efforts. "We are always amazed by the creativity of our supporters and this wonderful animation from Freyja and Sophie is a fine example of how young people can make fundraising a part of what they do", she said.

Evgenia Gostrer, lecturer of Illustration Animation BA (Hons) at Kingston School of Art, congratulated Sophie and Freyja on their initiative. "What makes this animation stand out is that the students proactively went out to find their audience of their own accord – this sparked their enthusiasm for the project and working together. They plan to work together as freelancers when they finish their course and we will be proud to see this partnership continue."

Sophie and Freyja are now working together on a live brief organised by the Illustration Animation course for Compass Collective, a non-profit theatre company working with refugees and asylum seekers.

Freyja said the course had given them both an insight into what they would like to do when they leave university. "This exposure to live briefs is so valuable because it gives us hands-on experience in real-world situations. It has made us realise we both enjoy working on storytelling that is meaningful and we would like to pursue working with charitable organisations in the future," she said.

Paddy Molloy, senior lecturer of Illustration Animation BA (Hons), explained that live briefs are set up to give students a broad range of skills and exposure to a variety of sectors. "We aim to show students that they are not just artworkers – they can also be skilled at planning and problem solving. By collaborating with external organisations on live briefs, our students get to answer a challenge or question that this client needs answering which sets them up for the real world," he said. "We are trying to expand the sectors in which students see themselves working in by getting them to collaborate with a diverse range of organisations beyond the typical cultural institutions, including charities, educational organisations and health and wellbeing services," he added.