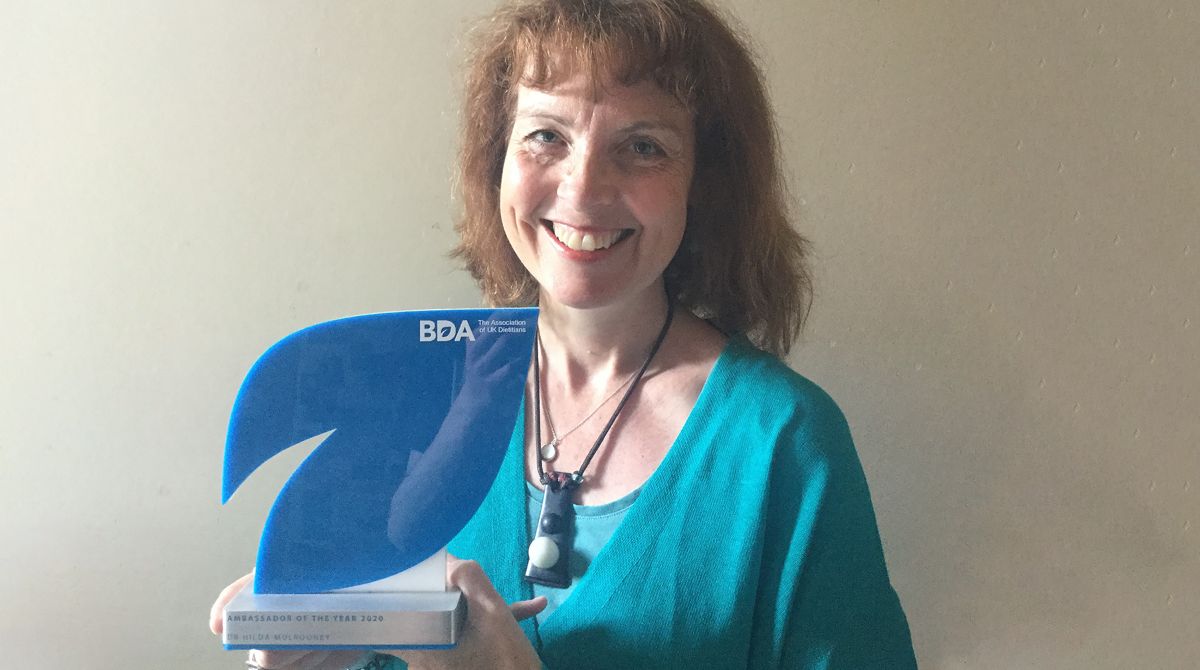 Hilda Mulrooney with her BDA award

Kingston University's Dr Hilda Mulrooney, a registered dietitian and nutritionist, has been named Ambassador of the Year by the British Dietetic Association (BDA) in recognition of her 15 years of service to the professional organisation.

The BDA is the largest association of food and nutrition professionals in the UK. Its annual awards celebrate the achievements and successes of members' work within dietetics, with the Ambassador of the Year award recognising someone who has gone above and beyond their role in representing and advocating for the organisation.

With last year's ceremony postponed as a result of the pandemic, more than 100 guests were invited to a virtual ceremony on April 29 for the 2019-20 awards, with Dr Mulrooney – an Associate Professor on the Nutrition (Human Nutrition) and Nutrition (Exercise and Health) BSc (Hons) degrees within Kingston University's Faculty of Science, Engineering and Computing – taking home the prestigious Ambassador award.

Acknowledging her long-standing contribution, the judging panel said Dr Mulrooney "had been a key ambassador for the BDA in a whole range of areas for many years, so this award is not only for 2019-20 but many years of amazing work on behalf of the Association. Hilda always brings expertise and commitment to everything she does on behalf of the profession".

Dr Mulrooney, who had previously been nominated for the award in 2018, spoke of how humbling it was to be recognised by her peers in such a way. "To win the award  really meant a lot to me. I have been recognised by the BDA before but to win Ambassador of the Year feels extra special. It's a real honour to have your colleagues recognise your work."

Dr Mulrooney has been involved in the organization since 2006. Initially serving as Training Officer in the specialist  obesity group between 2006 and 2010, she has been responding to the latest consultations related to obesity for the BDA since 2012. During this time  Dr Mulrooney has given evidence tot the House of Commons and worked with other prominent groups such as the Royal College of Physicians and the National Institute for Health and Care Excellence.

Detailing why she took up the role, Dr Mulrooney emphasized the importance of the BDA in the dietetic world. "I felt the organisation needed a bigger voice," she said. "The position is elected, so every two years I have to continue to win the support of my colleagues to carry on in the role. Advocating for the profession is something I'm passionate about and I've enjoyed being able to play my part in this way."