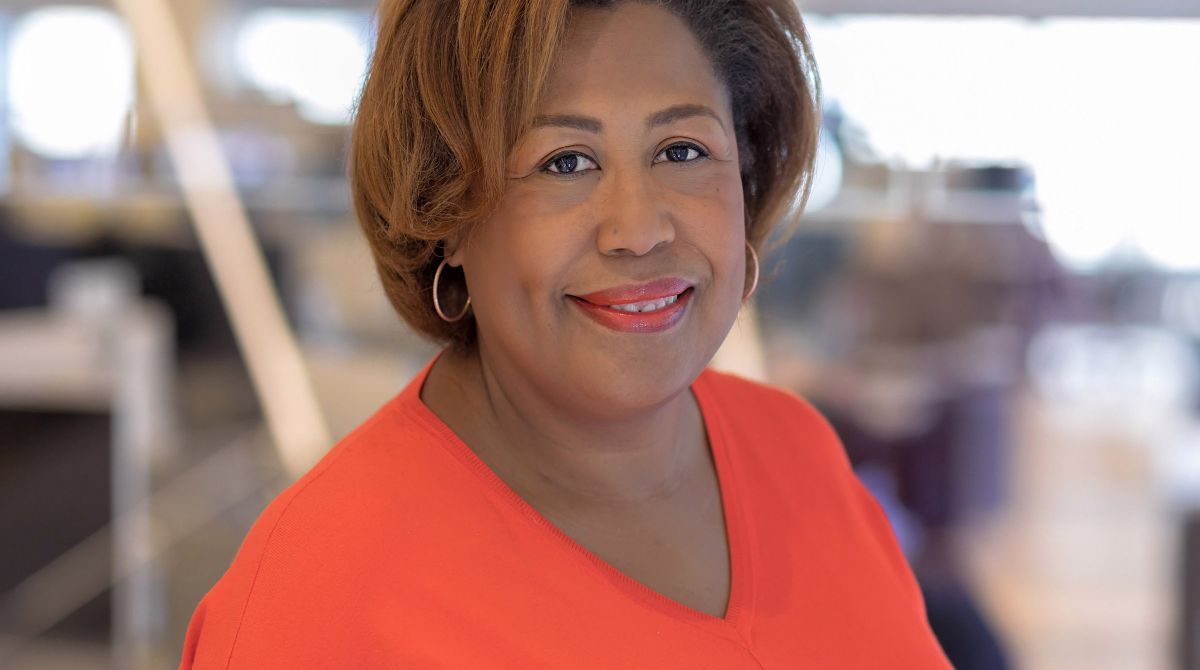 Kingston University alumnus Pamela Hutchinson, who was awarded an OBE in the New Year Honours, has been pivotal in advancing diversity and inclusion in the financial services sector for the next generation.

A diversity and inclusion champion who is among a group of celebrated individuals from the Kingston University community recognised in the latest New Year's Honours list has reflected on the importance of her legacy to ensure equality of opportunity for the next generation.

Pamela Hutchinson, who graduated from Kingston University in 1995 with a postgraduate diploma in law, was awarded an OBE for services to diversity and inclusion in the financial sector.

Mrs Hutchinson, Global Head of Diversity and Inclusion at financial, software and media company Bloomberg L.P, has made a significant and lasting contribution to broadening recruitment and advancing inclusivity in leading financial and engineering firms over a career spanning more than 20 years. She described her legacy and that of people in similar roles as essential to broaden the pool of talent recruited from and to ensure that there is equity throughout the workplace.

Receiving recognition in the New Year Honours was a complete shock, she said. "I was surprised and delighted personally, but even more delighted that this award shows how far diversity and inclusion has come and that organisations and society are taking it seriously," she said.

Mrs Hutchinson has also worked at firms including Northern Trust, Deutsche Bank, Barclays, and Goldman Sachs. Partnering closely with human resources and business leaders, she has been instrumental in enabling the integration of diversity and inclusion into practices and processes and is one of the most respected thought leaders and vocal advocates for diversity in the private sector both nationally and internationally.

"It's been very important to me that the work I do with organisations, whether I work for them directly or partner with them externally, is transformational and has real and tangible impact" she said.

Recalling her time at Kingston University, Mrs Hutchinson, now 55, described it as a wonderful campus with friendly, welcoming people. "It was a great course with a phenomenal group of people, and I am still in contact with some of them. I felt like I fitted in which was not true of everywhere I studied," she said.

Born first-generation British to Caribbean parents, Mrs Hutchinson said she experienced racism while growing up in the UK and that integration was not easy for her parents during the 1960s and 1970s. While ethnic minority children were not encouraged or expected to excel, the narrative at home was one of work hard, be a good person and good things will come, she said.

"My parents came to Britain with the hopes of increased opportunities and success for their children and I am driven to pay that forward to the next generation including my children," she said. "We waste so much talent if we look through a narrow lens when we recruit and promote from the same pool of talent and whilst there is still so much more to do from a diversity perspective, I am encouraged and optimistic that workplaces will achieve greater diversity, equity and inclusion."

Mrs Hutchinson advised Kingston University students interested in a career in diversity and inclusion that the most usual routes were through roles in human resources or joining networks within organisations. Success requires passion, commitment, and resilience, but most importantly collaboration with those in the majority. "We are all in this together and there has to be space for everyone; no one wins if we leave some of us behind," she said.

Also recognised in the New Year's Honours was the renowned British director of Jason Bourne films, screenwriter and producer and Kingston University honorary graduate Paul Greengrass who was made a CBE for services to the arts. Multi-award winning and Oscar-nominated, Greengrass is well-known as the director of three of the Hollywood action movies from the Jason Bourne spy franchise as well as for his distinctive use of hand-held cameras and documentary-style filmmaking.

Greengrass received an honorary degree from Kingston University in recognition of his outstanding contribution to television and cinema. As well as the Bourne films, he has directed critically acclaimed dramas about challenging subjects from Bloody Sunday and the murder of Stephen Lawrence, to the 9/11 terrorist attacks on the United States.

On receiving his honorary degree in 2012, Greengrass said universities such as Kingston were a breeding ground for talent and played a pivotal role in giving young people original perspectives and preparing them for a career in the creative industries.

"You have to be committed to your subject matter because it gives purpose to what you're doing," he advised at the time. "You have to fight to get your perspective heard and it's the committed voice with a strong view that cuts through."

Also recognised in the Queen's New Year Honours was former Kingston University staff member Jayne Aldridge who received an MBE for services to students in higher education. Ms Aldridge joined the University in 2009 and led its student services from 2012 for six years during which time she made an important contribution to the overall experience of thousands of students.