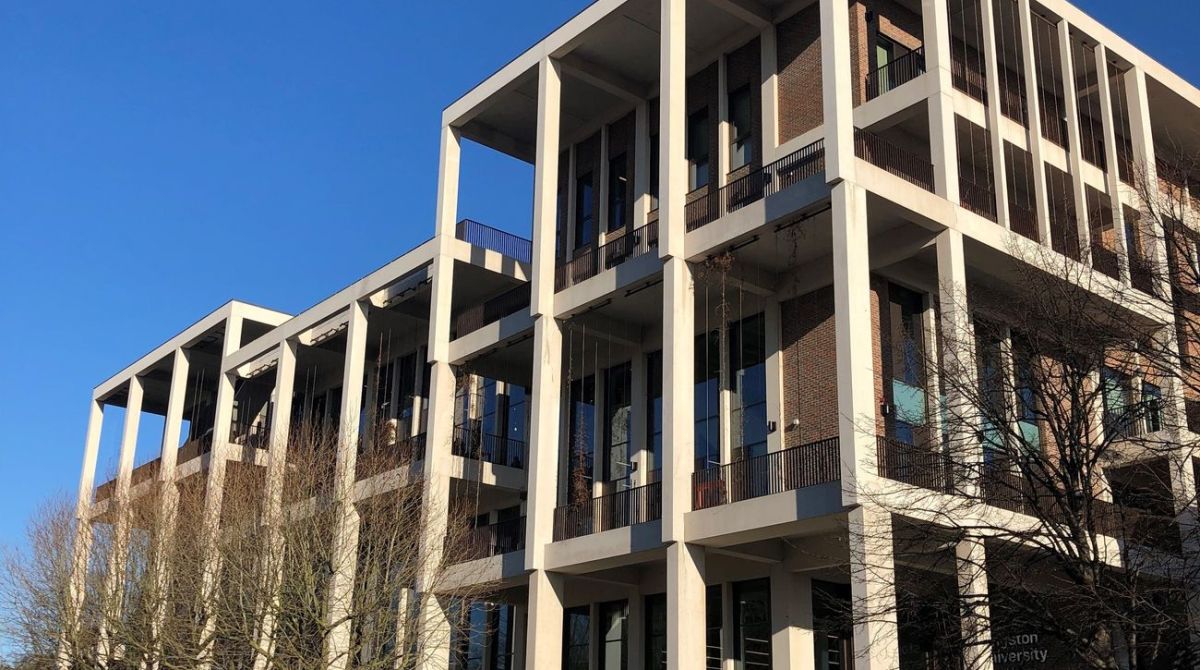 Some 40 buildings across 18 countries that demonstrate excellence in European architecture were shortlisted after a jury panel met in Barcelona to consider projects built during the past two and a half years. These were then further narrowed down to a final five in the architecture category, with Town House the only UK building among the finalists.

The other four projects include Catalonia's 85 Social Housing Units in Cornellà de Llobregat by peris+toral.arquitectes, Berlin's Frizz23, by Deadline and the Railway Farm in Paris, by Grand Huit and Melanie Drevet Paysagiste. The final project on the shortlist is the Z33 House for Contemporary Art, Design and Architecture in Hasselt, Belgium, by Francesca Torzo.

Opened in January 2020, Town House was conceived as part of Kingston University’s bold vision to create an inspirational new learning space that also acts as a gateway to campus for borough residents and businesses. Housing a three-floor academic library, archive, dance studios, a studio theatre and raked courtyard, the six-storey structure was built by three-time Education Constructor of the Year winner Willmott Dixon Construction.

The EU Mies van der Rohe Award, celebrated as the highest accolade in European architecture, is awarded biennially. Usually recognising projects built during the past two years, this year's award was expanded to cover a further six month period.

Having already received confirmation of its status as the UK's best new building with the award of the RIBA Stirling Prize in October, the latest recognition for Town House affirmed its place among Europe’s leading architectural achievements, Kingston University Vice-Chancellor Professor Steven Spier said.

“Town House has always been a statement of ambition for the University, a bold vision of an inspirational place in which to bring students and staff together from across disciplines," he said. "The flagship building also serves as an inviting gateway to the University for the wider community.

"Following on from our Stirling Prize success, being named among the finalists for the Mies van der Rohe award confirms the scale of our ambition and recognises the magnificent building that has taken shape.

“Since Town House opened its doors two years ago, our students and staff have truly embraced the building, benefiting from the physical and visual exposure to different means of learning, thinking and doing that it provides. That is, after all, the definition of a university. The national and international award recognition demonstrates the scale of Grafton’s achievements with their design and the impact great architecture can have within higher education.”

Kingston University's Director of Estates and Sustainability Sean Woulfe said: "The Mies van der Rohe award is among the most highly regarded prizes for European architecture. For Town House to be named as a finalist alongside four such incredible buildings across the continent is a huge honour.

“Town House has been a real beacon for us as we've navigated the challenges of the pandemic. We couldn’t be more proud of what it has delivered for our students, our staff and the local community. The recognition it has received chimes with the ambition of the University and the importance we place on the value of great design."

The prize finalists were considered by the jury to be works that would encourage and become models and references for local city policies in their countries. The jury will visit the final five projects next month, with the winner to be announced at the end of April. The award is named after Ludwig Mies van der Rohe, a German-American architect who is one of the principal pioneers of modern architecture. One of the most famous buildings he designed, the Barcelona Pavilion, will serve as the venue for the final award ceremony in May.

Outlining the accolade's standing across the continent, European Union Commissioner Mariya Gabriel said: "The EU Prize for Contemporary Architecture - the Mies van der Rohe Award highlights the contribution of architecture to sustainable development," she said. "We need young people, architects, artists, education and cultural professionals, innovators, entrepreneurs and regional authorities from all over Europe to actively engage and benefit from this initiative."