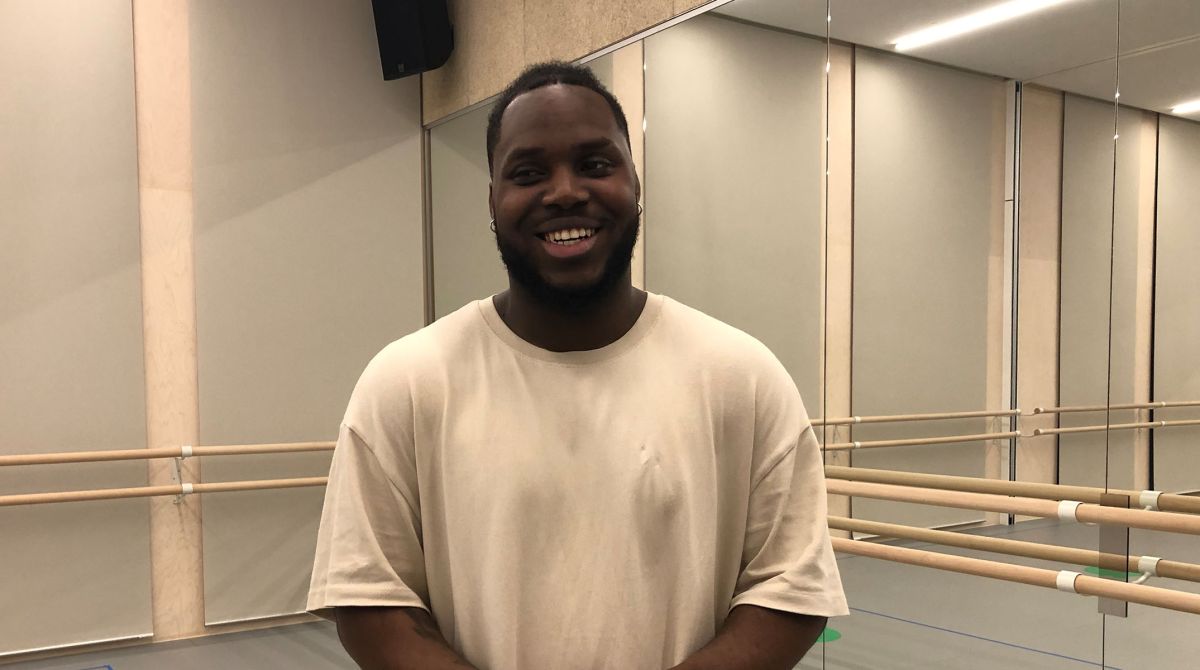 A Kingston University dance student has choreographed a performance based on his lived experience as a carer for his younger brother and the sacrifices his mother had to make as a working single parent.

Final year dance student Akeino James took responsibility for looking after his younger brother when Akeino's mother migrated from Jamaica to Birmingham in 2000. His mother had to juggle many jobs while being a single parent looking after Akeino and his baby brother Tyreke, and this is one of the themes explored in Akeino's final degree piece.

"I had to helped take care of my little brother, who is three years younger than me," he said. "I would be left while mum worked and had to make sure he had done his homework. I had a lot of responsibility but we've since realised that this only made us closer as siblings."

It was during this time that Akeino became interested in dance when his mum signed him up to a variety of after-school clubs. "My mum said I that I could never keep still so put me into after-school clubs to give me a routine and put my energy into something. I've never been really good at talking so being able to dance and express things without words has always been important to me," the 22 year old said. "I enjoy the creative processes that you delve into and the performing aspect to it. I like to share my ideas with people, I want those with similar experiences to myself to know that you can do other things."

While exploring possible themes for his final performance, Akeino took inspiration from autobiographical work of choreographers Botis Seva and Joseph Toonga to explore the relationships between his mother, brother and himself.

"In a lot of single parent stories, it's about what happened after the father leaves and the effect this has on the children. I wanted the narrative to focus on the sacrifices my mother made and what she had to go through to make sure her kids had what they needed. I wanted her story to be told," he said.

Drawing on these experiences, his final dance focuses on the challenges the family went through during that period of their lives, with a personal monologue from Akeino alongside interviews with his brother and mother edited into the soundtrack, which plays as he and his collaborators perform. He will be performing the piece as part of the final assessment towards his degree.

Akeino has chosen to use Krump, a style of Hip-Hop dance originating from South Central Los Angeles that uses expressive and exaggerated movements, to communicate his emotions and tell his story. "Krump is passionate – and being able to take frustrations and turn them into a positive really resonated with me and gave me a focus," he said.

Stephen Mason, senior lecturer in dance, said students studying dance at Kingston University were encouraged to make work that was meaningful to them. "Over the three years of the course, Akeino has been particularly interested in making work about his identity," he said. "We want our students to feel prepared to become artistic leaders of the future, to find a practice so that they can draw from these lived experiences to create performance work in an authentic sustainable way."

Following the completion of his degree, Akeino plans to travel and dance in theatres, building up his professional experience, "My long-term goal is to have my own company, to visit disadvantaged schools to let kids know that creativity can be an option," he explained. "I want them to know that whatever their passion is, they can make something of it. That was something my mum told me – she was always supportive of my dreams."

Reflecting on Young Carer Action Day, Akeino advised young carers that his experience had brought his family closer and not to take family for granted. "You don't need two parents to make something of yourself.  You might have more responsibilities as your friends, but you will be better for it in the end. You are not alone – you can do anything you want if you put your mind to it."