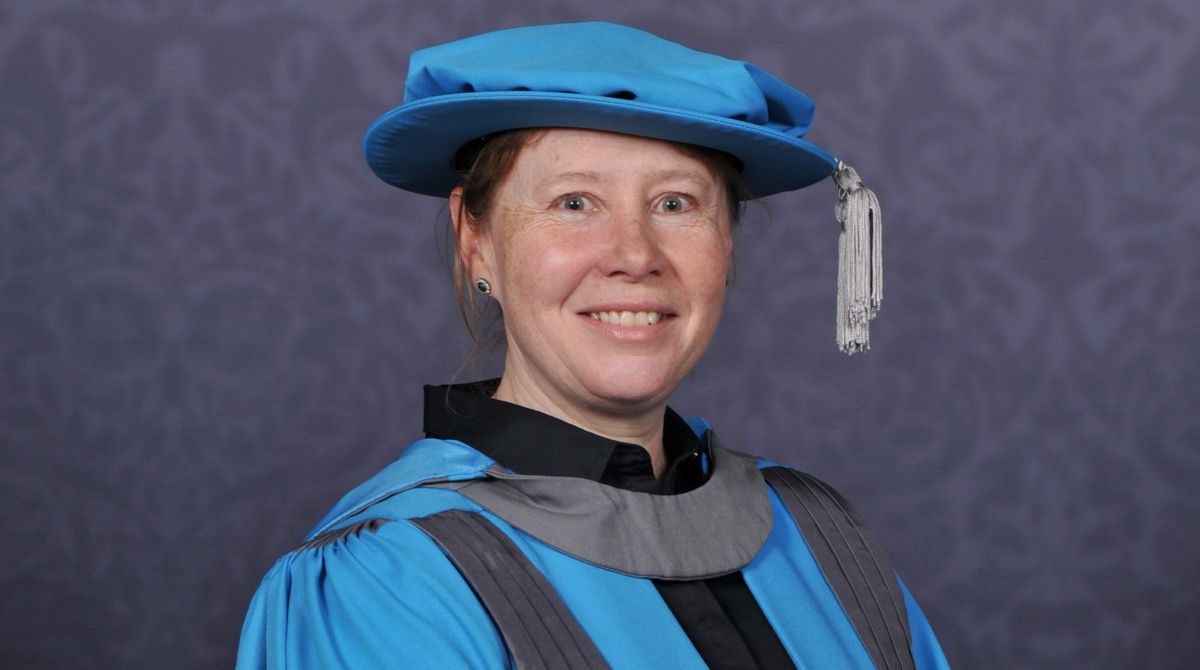 A leading advocate for engineering, well known for championing the need for more women and girls to enter the profession, has received an honorary degree from Kingston University.

Chief Executive Officer of Operations for Pure Data Centre Group and president of the Women's Engineering Society Dawn Childs was named an Honorary Doctor of Science during a graduation ceremony for the University's Faculty of Science, Engineering and Computing at Twickenham Stadium.

The award recognises her exceptional work inspiring women to pursue careers in engineering and her collaborative work supporting students through a visiting professorship at Kingston University. Ms Childs has been a tireless campaigner for more women and girls to move into engineering during a career that has seen her take on senior roles at Gatwick Airport, Merlin Entertainments and the National Grid, after 23 years in the Royal Air Force.

A fellow of the Royal Academy of Engineering, she received the Alistair Graham-Bryce Award from the Institute of Mechanical Engineers in 2015 for her significant contribution encouraging young people to consider a career in engineering.

Addressing graduands at the Twickenham stadium ceremony, she highlighted the importance of making work enjoyable and spoke of the freedom engineers could have to move into different pathways during their careers.  "It doesn't matter what your base degree is – as an engineer you can transition to a range of opportunities as long as you are resourceful and logical and apply your knowledge," she said. "I've worked across aeronautical, aviation, civil and electrical engineering despite my degree being in mechanical engineering, applying elements from each of my roles as I've taken on new challenges."

Being open to changing direction and trying something new within the field was important, she added. "One of the overarching themes from my career has been learning to own my success. Not chasing the achievements of others, being true to yourself and understanding what makes you happy is the most important thing in the world."

Ms Childs joined the Royal Air Force at 17, working her way up to wing commander before moving on to roles with Gatwick Airport and then Merlin Entertainments, where she headed engineering operations. While there she spent 18 months working with and mentoring female engineering students at Kingston University as part of a Royal Academy of Engineering visiting professorship, before moving to the National Grid as UK Change Director, leading a major gas and electricity efficiency programme. She took up her current leadership role with Pure Data Centre Group last August.

As president of the Women's Engineering Society, one of her aims is to drive progress towards increasing the level of women in engineering to 30 per cent by 2030. "When I started advocating for getting more women and girls into engineering, the percentage of women in the profession was just seven per cent. That number has now doubled to 14 per cent, increasing by five per cent in the past five years, which is fantastic, although there is a lot more work still to do," she said.  One of the challenges the Women's Engineering Society is working to address is the leaky pipe – the loss of women and girls from STEM careers as they move through their career journey.

Being involved in efforts to improve the gender balance within engineering in the United Kingdom had been hugely rewarding, Ms Childs said, as had her role mentoring students as a visiting professor. "Being recognised with this award from Kingston University for doing something I'm truly passionate about is a real honour," she said. "The biggest takeaway for me working with the students has been just how beneficial the interaction of industrial knowledge can be with people going through their learning journey."

Head of Kingston University’s Department of Aerospace and Aircraft Engineering Dr Peter Barrington said her trailblazing career across a range of disciplines and passion for bringing more girls and women into engineering had made a significant impact on the profession.

“Dawn’s career, the challenges she has faced and overcome, and her efforts to address the sector’s gender imbalance stand as a huge inspiration to young people starting out on their journey into engineering," he said. "It was fantastic to see how much our students benefited from her expertise and knowledge during her time as a visiting professor with us and I’m delighted to be able to welcome her back to receive an honorary degree in recognition of her longstanding achievements in the field.”