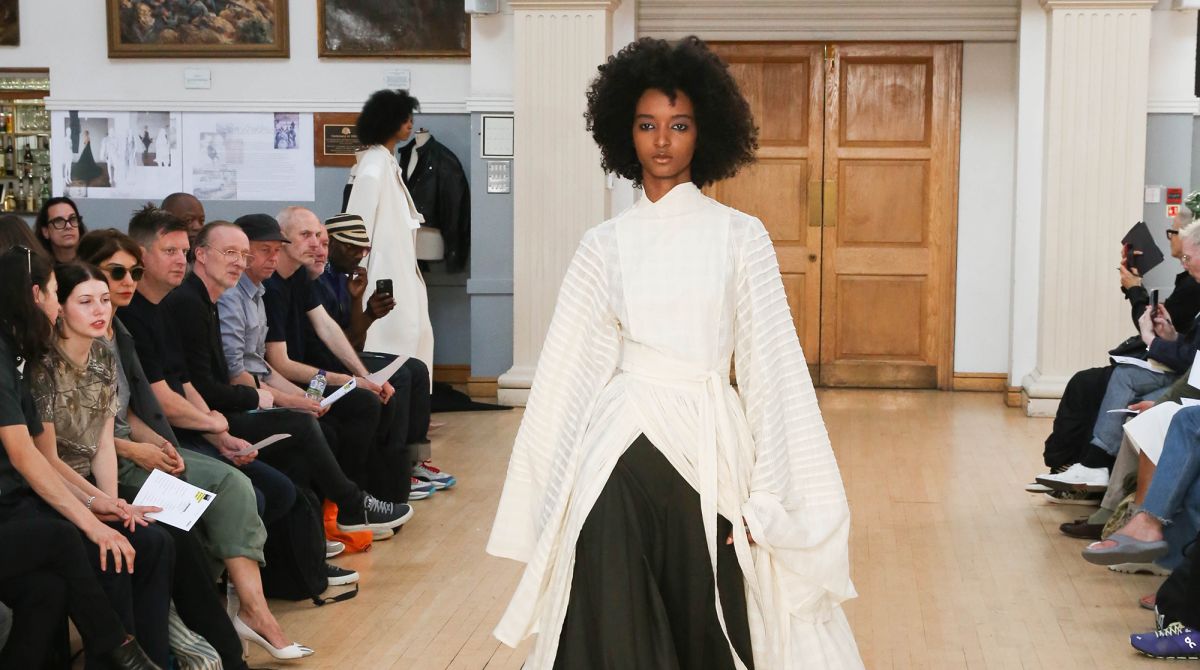 Cultural identity, modular clothing, and the role sportswear plays in the construction of queer identities were some of the themes explored at this year's Kingston School of Art BA (Hons) Fashion Show.

A group of 20 talented designers shared their work with an invited audience of industry and press within the historic surrounds of London Scottish House's Drill Hall in Westminster. The show was hosted by fashion industry icon, commentator and visiting professor Caryn Franklin MBE, herself a Kingston University graduate.

Among the final year students is Zhanna Moskalyova, whose womenswear collection, which was displayed on mannequins greeting guests as they arrived at the show, centres around a journey of self-discovery to find out more about her dual Ukrainian and Russian heritage.

Zhanna's clothing features abstract shapes and structures created through experimentation with metalwork, with the silhouettes taking inspiration from photographers whose work depicts post-Soviet landscapes. "I looked into how Ukraine and bordering countries were trying to rebuild their identities after the collapse of the Soviet Union and was inspired by Alexander Bondar, who photographed abandoned Soviet buildings, and a book called Soviet Bus Stops by Christopher Herwing. I was really interested to see how I could incorporate these striking shapes into clothing," she said.

After the outbreak of war earlier this year, her collection identified more intensely with her Ukrainian roots, Zhanna explained. "I decided to take further inspiration from Ukrainian photographers Synchrodogs and their portfolio, Ukraina, which provides a visual portrait of everyday life in Ukraine before the war. I wanted to find a way of paying homage to our shared culture through my work," she added.

Another designer who has explored the theme of heritage through their work is Meerim Mamatova. The international student looked at traditional clothing from her native country, Kyrgyzstan, to create two menswear and four womenswear looks that put a modern twist on conventional costumes.

Each look features up to five garments made from organic materials including linen, wool and cotton. Meerim explained this layering effect ranging from heavy wool coats to sheer dresses was inspired by her country's nomadic lifestyle.

"In Kyrgyzstan, there are still people who live a semi-nomadic way of life in the mountains, and they wear multiple layers because of the changing weather," she said. "I wanted to create a modern, comfortable and transformable collection that allows people to have more styling options and to be prepared for any type of weather."

Detachable and interchangeable elements lend a modular approach to designer Ben Davis' collection. Every piece can be detached using zips or double-ring belts and either replaced or transformed into a different iteration or length. Cargo trousers can be turned into shorts, pockets zipped off to form messenger bags, and jackets can become gilets or jersey tops.

The utility-wear collection is made predominantly from wax cotton and scuba fabric and takes inspiration from his passion for cycling. "I've taken the elements of typical cycling clothing such as stretch fabric, breathable material and reflective triangles to form a multiple purpose collection that works for a number of styles," Ben explained.

The 23 year old hopes to set up his own label in the future which follows the modular design concept, with a view to helping extend the life of clothing and reduce waste in the industry.

A further highlight among this year’s collections is a sportswear range for men inspired by Kingston final year designer Marcel Dominguez’s feelings towards male locker rooms and the stereotypical masculinity of sportswear.

"As a gay man, I realised that locker rooms were a place where sometimes I wouldn't feel comfortable," he explained. "I've always been interested in what role sportswear plays in the construction of gay and queer identities. I've realised that I've dressed in sportswear previously as a way of hiding myself to fit into normative masculine standards. My idea was to challenge those perceptions and come up with a sportswear collection that allows individuals to feel comfortable expressing their sexuality."

Marcel's collection uses second-hand football shirts twisted and printed on mesh to create the illusion clothing is falling off the body, as if the individual is undressing. The effect was created by taking photos of the football shirts ravelled up on the floor, scaling them up and playing with the fit on the body before printing.

BA (Hons) Fashion course leader David Frizzell said the return of a catwalk show in the heart of London was an exciting opportunity for students to showcase their work to industry experts and fashion influencers. "The Kingston course has a longstanding history of producing highly skilled fashion graduates who go on to work for leading labels, and I have no doubt this year's cohort will achieve great things," Mr Frizzell said. "Many of the students have taken on very personal meanings as inspiration for their collections from embracing sexuality to celebrating heritage and these topics have culminated in exciting, forward-thinking designs." 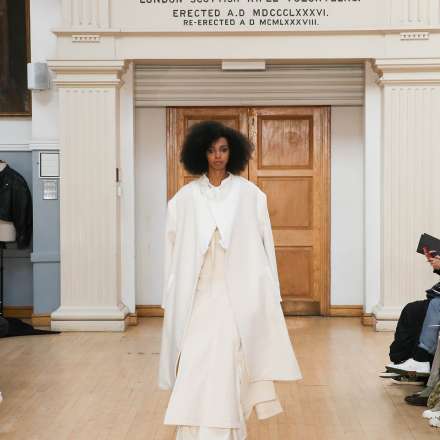 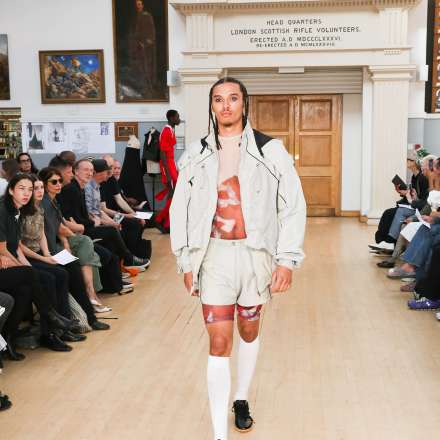 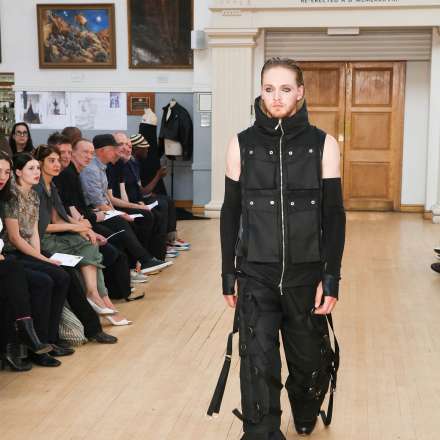 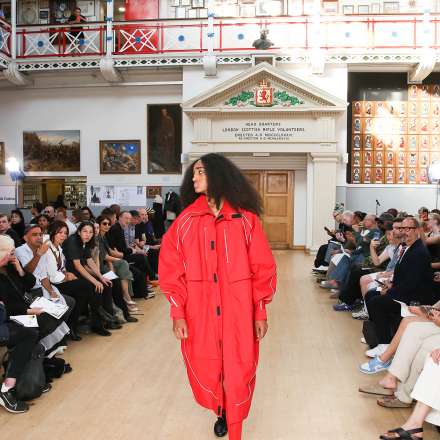 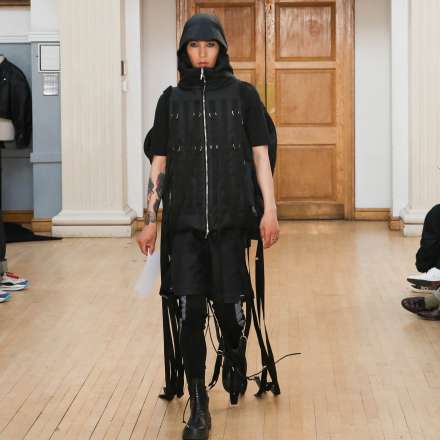 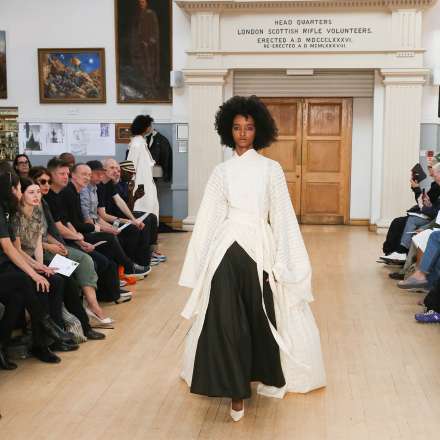 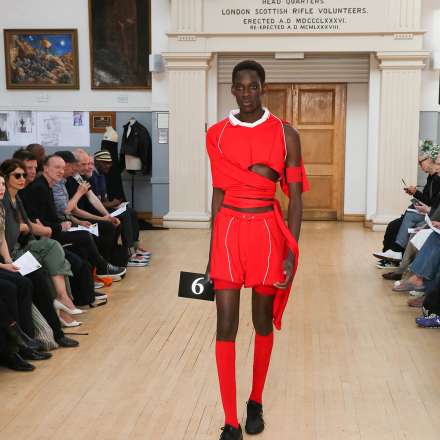 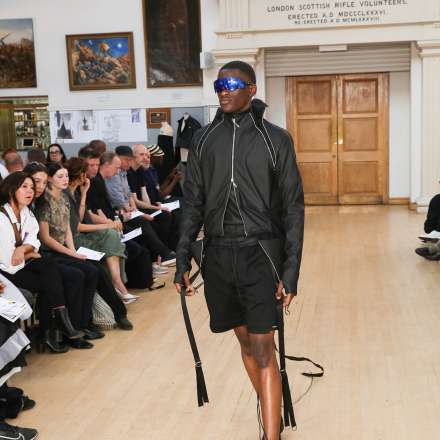