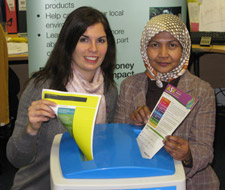 Removing personal wastepaper bins to encourage staff to recycle waste, student audits of energy use, waste and travel, a survey of the wildlife and habitats of the University's four campuses and campaigns to encourage staff and students to save energy were among the measures that helped the University achieve the national standard set by the Institute of Environmental Management and Assessment. Kingston is the first academic institution to reach the third phase of the Institute's Acorn BS8555 standard, a government-endorsed scheme similar to the Kitemark system.

Nicola Corrigan, Kingston University's Sustainability Facilitator, said it showed the University's commitment to improving its environmental record. "For a number of years we have had a sustainability strategy and various programmes to reduce our carbon footprint, improve waste management, recycling and biodiversity as well as raise awareness with our staff students and the local community through education, training, events and campaigns," she said. "Achieving this standard formally recognises these efforts to improve the environmental performance of the University." By the end of the year, said Ms Corrigan, the University hoped to achieve the internationally recognised ISO14001 standard. 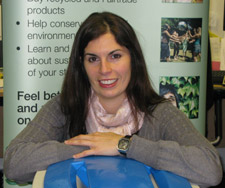 In spite of opening three new buildings, the University has cut its carbon emissions by 2 per cent during the past 12 months, through measures including new boilers and lighting systems and campaigns to encourage staff and students to turn off unnecessary lights, computers and other equipment. During the same period, the amount of waste recycled by the University has increased by a quarter. These successes helped the University achieve the standard, alongside projects including plans by design and fashion students to improve the cycle shelters at the Knights Park campus. The Sustainability Hub, launched last year, co-ordinates sustainability activities across the University including courses, research and community projects.

The University also had to meet legal obligations such as ensuring that its waste is disposed of by recognised contractors.

William Richardson, from environmental auditors AJA, said: "I have reviewed and assessed the environmental impact of the University and it has clearly gone above and beyond the certification." He added: "The sorts of initiatives that have been implemented are incredibly proactive and have led to some enormous carbon savings."