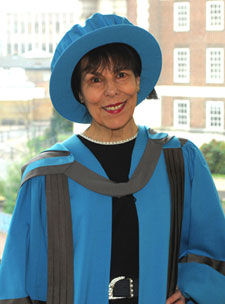 It has been a long and interesting road from being thrown out of convent school for being a ‘heretic in Satan's power' to graduating from Oxford and becoming the author of 24 books, according to writer Wendy Perriam.

Ms Perriam, who is renowned for her tempestuous protagonists and explicit sex scenes, has been described by critics as ‘magnificent', ‘England's finest and funniest novelist' and ‘England's most interesting writer'. She has now received an Honorary Doctorate of Letters from Kingston University in recognition of her significant contribution to literature and reading pleasure.

Acknowledging that her sometimes controversial subject matter could divide critics, Ms Perriam said she was not afraid of tackling traditional taboos. "In my very first novel, Absinthe for Elevenses, I wrote some masochistic sex scenes set to church music," she said. "My character felt that sex was such a sacred act that it needed an appropriately sacred accompaniment. The same thing happens in Fifty Shades of Grey, but, alas, I don't have E L James' mega sales."

Her varied experiences, including working as a waitress, barmaid and artist's model as well as being a single parent on benefits and fighting off the bailiffs, had helped shape her as a writer, Ms Perriam said. "The reason I have always written about sex was because I was brought up in an atmosphere where it was completely ignored or denied. I left school at 18 and I didn't know I had genitals - all we'd been taught was that sex was a terrible sin. In my innocence and, not knowing a soul who wasn't Catholic, I assumed no one would risk eternal damnation by having intercourse," she recalled. "The reality proved so different, I wanted to explore it in my fiction."

Kingston University had always been important in her life and literary career, Ms Perriam said. It was there in the mid-1970s, when it was still Kingston Polytechnic, that she got her chance to be published while studying for an English degree. "I wrote some short stories for the polytechnic magazine," she said. "The writer-in-residence showed them to his literary agent who told me to give up my degree and write a novel. I agonised about the decision as I was already two-thirds through the course but, in the end, I thought: ‘Look, you've wanted to be an author since you were five'. I went on to write Absinthe which was accepted immediately by a publisher."

Since then, Ms Perriam has written 16 more novels as well as seven short story collections and has recently donated her archive to the university. Her latest book, An Enormous Yes, will be published in June this year. "It features a passionate affair between two 60-somethings," she said. "Sex for oldies is often ignored in fiction and may well be considered distasteful but one's libido doesn't have to decline with one's sight and hearing." 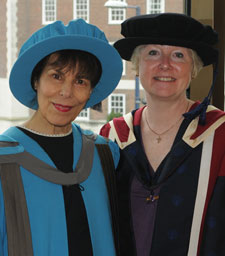 A former tutor in creative writing at Morley College, Lambeth, Ms Perriam now teaches mainly privately, dividing her time between her writing and her students. She advises her students to write as she does, doing the first draft in pen to help the ideas flow and writing about the subjects which arouse the strongest passions and emotions.

"It's relatively common for writers and actors, who offer a combination of a certain level of publicly-acknowledged work and a certain age, to be hailed as a national treasure," course leader for Kingston University's MA Publishing Dr Alison Baverstock said. "Wendy's generosity as a writer, her wonderful books and her close links with the University and local area certainly make her Kingston's treasure."