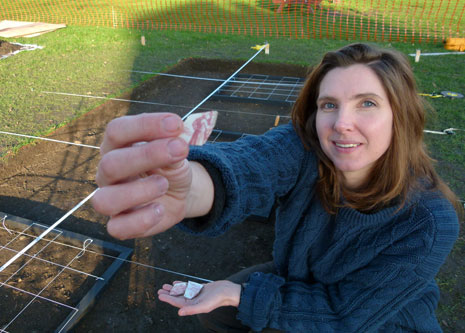 From a clay smoking pipe to Neolithic flint, a 19th Century garden has been revealing some of its secrets to an archaeological team from Kingston University.

Dr Helen Wickstead spotted an opportunity to delve below the surface of an area of land at the University's Seething Wells hall of residence after looking at historic maps and images of the area alongside the River Thames. The former industrial site had not been excavated before and she was intrigued to see whether she could find traces of a garden marked out on early maps.

"The Seething Wells site in Surbiton is of historic significance because the waterworks built there and opened in 1852 were pivotal in improving the health of Londoners. They provided clean, filtered water when cholera had been ravaging the capital," Dr Wickstead explained. "A garden on a site like this might tell us more about the people who lived and worked nearby - did they use it for leisure, was it just decorative and reserved for the privileged, or was it used for food production? It was a time of great social change so we were keen to roll back the turf to see what we could find."

The team studied 19th Century maps from English Heritage archives, comparing them with aerial photographs taken during World War II by the Royal Air Force as well as more modern day Google Earth images. "We could see that a path existed across the site and the parched grass visible on modern satellite images also suggested its presence," Dr Wickstead said.

After digging a 10 metre square trench, the team discovered signs of a path made from cinder and gravel. "That showed us it was a functional feature rather than decorative," Dr Wickstead, who lectures in heritage, said. "Now we'd like to explore beneath it and sample the soil as it will have captured pollen from plants growing at the time."

Shells in the gravel section suggest the path was probably made from waste material from the water filter gravel beds that still exist opposite the hall of residence. But one fragment spotted by chance in the waste took the team right back to the Neolithic period. "We were very excited to find a fragment of flint that we believe is a chipping from the making of Neolithic tools," Dr Wickstead, who is also a pre-historian, said. "It could be as much as 6,000 years old. I expect it came from the river at some point and was caught up in the gravel used in the filter beds. It's an intriguing find and took us all by surprise."

The team also unearthed a fragment of red and white pottery with illustrations of two Victorian gentlemen. "I like to imagine one of those people could even be the engineer James Simpson who invented the capital's water filtration system," Dr Wickstead said. 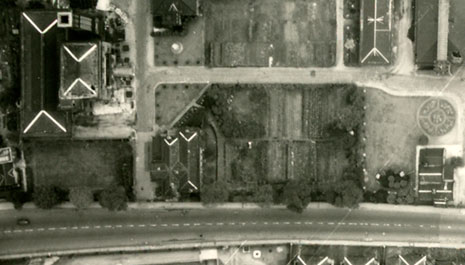 Some more recent objects have connections to the war years. The team expected several small metal garden tags they discovered to bear the names of plants. "On closer inspection, two had names of people on them," Dr Wickstead said. "We'd love to find out more about Derek Ellis and Mabel Gower - perhaps they worked the allotments that were on the site during World War II."

Students studying historic building conservation joined Dr Wickstead on the dig. Third year Crispin Thomas, who is particularly interested in Medieval carpentry, helped survey the ground with an auger - a drilling device that tests resistance to see how deep top soil is. "I'd never been on an archaeological dig before and I was fascinated to see how much information could be gleaned from such a small space," he said. "So much evidence for how we got where we are today as a society, in so many aspects of life, is right there under our feet."

Dr Wickstead said that small green patches of land like that at Seething Wells were scattered all over London and were windows into the past just waiting to be explored. "These little open spaces are like pieces of jigsaw puzzle and no-one has ever put them all together. A comprehensive study would tell us more about the story of the capital and, importantly too, the suburbs that helped the city flourish," she said.

Surbiton resident Sue Wilson spotted the event online and contacted Dr Wickstead to get involved. "I'm fascinated by local history and the dig was a chance for me to tap into some of the skills I developed when I was at university studying archaeology and geography," she said. "It's great to see the skills of Kingston University's students being channelled into a local project. The Seething Wells waterworks played a central part in the way Surbiton developed, so they get to learn more about their University's home town and the community can benefit from their research." 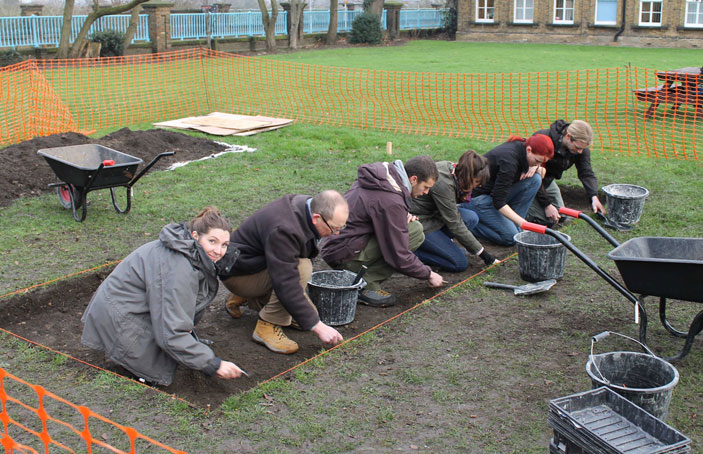