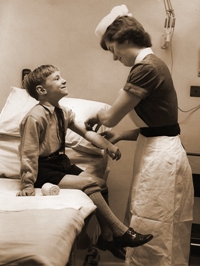 Military matrons, dogs on the ward and starchy uniforms are just a few of the memories of life at St George's Hospital recorded in a new book telling nurses' first-hand accounts over the last 80 years.

The book – Nurses' Voices – has been released in the International Year of the Nurse, a celebration of nursing's enormous contribution to world health. It is an oral history of nursing since 1929, based on 1,000 hours of recorded interviews with 130 nurses. Through their memories, they provide a narrative through the history of modern nursing.

Each chapter tackles a different aspect of life as a nurse, including training, uniforms, life on the wards, social life, disasters and epidemics, and changes to clinical practice. It tells the stories of nurses who trained and worked at St George's Hospital and its partner medical school, St George's, University of London, which now trains nurses at its Faculty of Health and Social Care Sciences, run jointly with Kingston University.

Nurses' Voices project manager, Carol McCubbin of the Faculty of Health and Social Care Sciences, says the book is a valuable record of several generations of nursing at St George's.

"This was a really fascinating project, and it's brought out so many wonderful stories. St George's has always been at the forefront of nursing, and it's been very interesting to discover how changes to national policy were implemented at the hospital and adopted into the working culture. As well as all the stories, we've managed to build up an archive of uniforms, medals and other bits and pieces that people have given us." 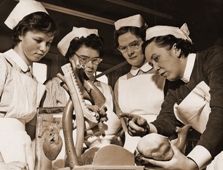 Muriel Powell is one of the figures remembered in the book. Her appointment as St George's matron in 1947 was sniffed at by many among the medical establishment, as she was just 32. Made a dame in 1968 for services to nursing, she is remembered fondly by many nurses in the book as an inspiring, wise, kind and humble figure.

There also reminiscences of "very plump" Matron Hanks from the 1940s, who held court at her desk at the hospital accompanied by two Pekinese dogs. Her advice to one nurse was that she "must do everything for love, it must come from the heart", and she conducted job interviews by asking applicants whether they liked rice pudding, what they thought of the British Empire, and whether they believed in the "life force".

The book covers upheavals in the National Health Service and the development of new nursing practices. It shows how much the profession has changed since the days of the military-style hierarchy of the matron system and the frilly, laced caps, starched collars and aprons of the old uniform. And it reveals how nurses dealt with World War II and disasters such as the Clapham rail crash.