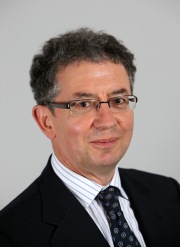 Kingston professor Robert Blackburn is preparing for a trip to Buckingham Palace to receive the Queen's Award for Enterprise Promotion.

Robert has been director of the University's Small Business Research Centre forÂ 15 years and has published more than 80 journal articles, reports and monographs and six books.

The awards celebrate people who promote enterprise skills and encourage entrepreneurial attitudes. They are announced each year on the Queen's birthday – 21 April. This year seven people have been selected; Robert is one of just two on the list from the field of education.

"I am delighted to receive this award," he said. "The field of enterprise is constantly changing and international in scope, which brings with it new challenges and opportunities. I really enjoy what I do and over the years have had the privilege of working with some very talented people."

The Small Business Research Centre has undertaken research forÂ numerous organisations such as the Treasury, the European Commission, Barclays and HSBCand received funding from various research councils. Robert is equally proud of his achievements in shaping the attitudes of would-be entrepreneurs. "My work ranges from exploratory research into young peoples' attitudes to entrepreneurship through to examination of older peoples' motivations for starting a business. Almost all the research I carry out hasÂ practical implications," he said.

Robert will visit Buckingham Palace to be presented with a crystal chalice on 14 July.

"The Small Business Research Centre has been a leader in its field for more than two decades,"Vice-Chancellor Julius Weinberg said. "This is well-deserved recognition for Robert's work in support of British entrepreneurs. The Centre is rightly regarded as one of Kingston's research gems and the University is proud to be its home."