Catching up with... Brian O'Rourke

Brian O'Rourke is chief composites engineer at WilliamsF1, the Formula 1 car constructor. He still attends the Faculty of Engineering graduation ceremony each year and was flattered to be chosen for the University's wall of fame in 2008. 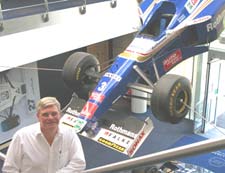 When were you at Kingston?

What degree did you do?

I was apprenticed at British Aircraft Corporation, Weybridge, and they recommended I try for Kingston as that course produced exactly the engineers they felt they needed.

Whilst at Kingston who was your favourite lecturer and why?

An amazing man called David Sellwood (who is still around). I would call him a true polymath – an instinctive, multi-disciplinary engineer; classical musician; an authority on the coinage of the Parthian empire; expert bridge-player; utterly decent bloke; and a natural teacher. Unforgettable and a real role-model.

Are you still in touch with anyone from your Kingston days? And have you been back here?

I usually attend the Faculty of Engineering graduation ceremony each year (held in Kingston now) and was flattered to be one of the wall of fame people in 2008. I am still in contact with a few from my student group but would still like to track down others.

How has your time at Kingston shaped your career?

I think it taught me be to be resourceful. Practical engineering design was at the heart of the course and those foundations were immensely helpful in later years when I was left to come up with solutions to problems with no-one around me who could help out.

My job title is chief composites engineer at WilliamsF1, the Formula 1 car constructor. I had carried on working in aerospace after graduating and that took me firstly to the north of England, and then to California for a few years doing stress analysis.

I joined Williams in 1982 because they felt my knowledge of composite materials and structures would help them to stay in front using the latest technology. I am still with them and continue to lead our efforts in that field.

In modern Formula 1, which is most important – the driver or the technology/car?

F1 is the pinnacle of world motorsport and the drivers are the best anywhere. The cars are at the extremes of high-tech but, nowadays, you must have the best entire package – all of the engineering as well as driver – if you are to win. Neglecting anything will make you noncompetitive.

What is the critical factor in application of any new composite?

In simple terms, weight-efficiency. Everything must pay its way on an F1 car in terms of delivering performance returns for minimum weight. We do not use anything for its own sake, it must be better than what went before it. If it can't help us improve ignore the 'hype' and leave it alone.

Does Formula 1 engineering have any benefits to ordinary people?

That's a tricky one. Historically, car manufacturers used F1 as a proving ground for their new ideas and, at one time, there would have been any number of examples of the results of that. Today it is quite hard to make the link to what helps people in their everyday life. It is mostly being promoted nowadays as entertainment which is no bad thing; it excites a lot of people.

I used to feel awkward about having helped to design military aircraft when I saw on TV what they actually did. Equally, F1 spent many years encouraging people to smoke which probably had an even more negative effect on the world's population. Today that is all gone – one of the logos on our car is actually for nicotine patches. How times change!

What has been your greatest achievement?

One of the aspects of the F1 car that I am most involved with is safety design. People may not know, but we have had mandatory crash-testing of our cars for 25 years and I have been responsible for that work from its inception. Today we have 16 separate tests to pass before we are allowed to go racing and they are very difficult, especially as the solutions must not lessen the car's competitiveness; quite a compromise.

When I was a student F1 had a very poor safety record – drivers were dying regularly – and it was little better when I joined Williams years later. The improvements since we started testing have made the business unrecognisable and today the public expects drivers walk away from apparently hideous accidents. I know that my efforts have helped to keep people alive and who wouldn't be proud of that? 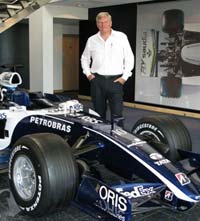 Think about both meanings of the word 'career'. People use the verb to describe motion that is out of control but the noun for what you do in life. In fact, they are the same thing; you don't have total control over your life, you are simply 'careering' through it. At 18 I had pretty set ideas about what I wanted from my 'career' but things didn't work out that way at all. Opportunities presented themselves and quick decisions had to be taken. Don't be afraid to open doors and respect that hard work – and luck – play a part in everything.

A spoof article about management – which part of the body really manages all of the others.

Saturday: waking up to sunny weather and the sound of bird-song, not going to work, a late breakfast, gardening with the Test Match commentary on the radio, cooking an interesting dinner outdoors for my wife and son, good wine. Sunday: sometimes church, more of the above plus some exercise – swimming, walking (I live in nice countryside) – a pint at the village pub, listening to some appropriate music, watching a Williams win a Grand Prix (if only!) and falling asleep without worrying.

I was once the fourth horn player in Blackpool Symphony Orchestra.

Who would you take with you any why? If not my wife, then someone who could talk about things other than engineering that interest me: cricket and classical music – I think Neville Cardus would be ideal (but he's dead – does that count?).

What book would you take and why? A Short History of Nearly Everything, Bill Bryson.

What movie would you take and why? Monty Python's The Meaning of Life as it would keep me laughing and be appropriate (or should that be The Life of Brian?).

What food item would you take and why? A large Dungeness Crab – dressed by me – with some good bread and salad (and a bottle of chilled Chablis if allowed).