Catching up with... Eleni Skarparis

We catch up with musician Eleni Skarparis. 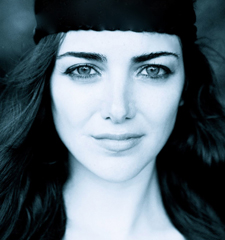 When were you at Kingston and what degree did you do?

I was in Kingston in 2008/09 and I studied Music (MMus in Music Performance).

Originally, I'm from Nicosia, Cyprus. I chose Kingston mainly because I was aware of the music department's focus on popular music performance.

Sum up your memories of your time at Kingston in two or three words.

Have you been back since graduating and are you still in touch with anyone?

Yes, I'm in touch with plenty of people and I've made many long-lasting friendships. I am also in touch with Philip Chambon, my former lecturer in popular music, and will shortly be performing at Coombehurst studio for the annual fresher's fair! Hilary Insall, who often performs as a guest cellist for my band EchoWants Her VoiceBack, is a former KIngston University student, as is our guitarist Maw Concas. The band began as an acoustic duo in 2009 with guitarist Labrini Grigoriadou who was also pursuing an MMus in Music.

I expected to push my band project forward, to write more songs and to keep performing. I am lucky in that I have so far managed to pursue my passion for music.

Winning the music prize for my Music MA at Kingston.

Don't stress. It will all fall into place eventually, and gradually. :-)

My latest act of clumsiness.

Being alone with the guitar, in the garden, strumming chords, singing half-melodies and jotting down ideas for a new song. I don't have the chance to do this as often as I'd like now. But I should remember to make the time.

Who would you take with you any why? Sammy, my partner. He's got a great sense of humour.

What book would you take and why? Jeanette Winterson's The Passion. She's one of my favourite writers whose fiction has inspired me to write songs and take risks in life.

What food item would you take and why? Grapes, cheese and wine as that's a scrumptious combination I enjoy.

What movie would you take and why? Big Fish – I'm a Tim Burton fan.