Catching up with... John Lunt 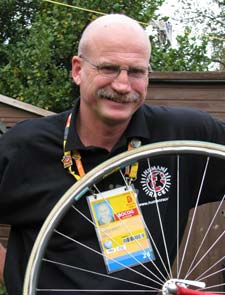 When were you at Kingston?

Between 1984 and 1986 – I did a two year part-time diploma in Management Studies. My first degree was a BA(Hons) in Geography and Physical Education from Lancaster.

It was my local University – I lived in Surbiton and worked in the area.

Yes I am. I also married a Kingston graduate, Nicola Lunt (née Hunt) – she's back at Kingston studying Forensic Science.

How has your time at Kingston shaped your career?

It made me realise the importance of marketing, networking and adding value to everything you do.

I'm the managing director of Human Race, a professional event management agency specialising in multisport events. I'm also the event manger for the triathlon at the London 2012 Olympics.

Looking at our performance in the Winter Olympics, how do you think we're going to do in 2012?

It's a completely different scenario. As a nation we're not that strong on snow and ice, but the summer games will be massively different. With the home crowd I predict we'll be winning quite a few medals.

Yes it will. London is an iconic city, a global centre for media, and we've got a sports mad population. Add to that our history in creating and setting the rules for sports and some fantastic venues, including Lords, Wimbledon, Wembley and Eton, and you've got a spectacular Olympic Games. 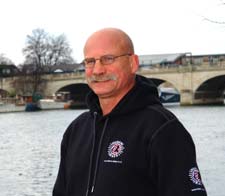 How can we relate to and understand the sport of triathlon?

We all swim, cycle and run at some point in our lives. Triathletes have evolved to do them all in one go and very quickly….!

What has been your greatest achievement?

Firstly, setting up and managing Human Race, which goes from strength to strength; secondly running the first ever triathlon in the Commonwealth Games in Manchester 2002; and finally – the pinnacle – I will be running the triathlon event at the greatest sporting event on the planet the Olympic Games in London in 2012.

What advice would you give our graduates?

Use your network of contacts and build on them, look for gaps in the market, and grasp every opportunity.

Watching 12 nine-year-olds at a tank party in Dorking get stuck in mud up to their knees and having a blast. Watching them get into their parents' cars afterwards was equally as funny.

Exercising – I would run and cycle on the Saturday and go for a swim on Sunday. I would watch my boys play football, have a Sunday lunch with my family, and then finally a trip to the cinema.

I left my job and ran away to Brazil for six months to explore the Amazon.

Who would you take with you? Robin Williams

What book would you take? Lord of the Rings

What movie would you take? The Star Wars trilogy

What food item would you take? Pasta