Catching up with... Peter Crerar and Norma Francis-Crerar 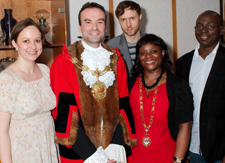 Norma: I was at Kingston University from 1991 until 1997 studying History of Art, and History of Architecture Design with Sociology, gaining a 2:2 BA(Hons). At first I signed up to do social sciences, but I found that towards the end of my academic year I was not on the right course and was more interested in the arts and sociology, so I opted to do a combined degree course.

Where are you from and why did you choose Kingston?

Peter: I was born and grew up in Glasgow. I liked the fact that Kingston was close to London, so a better location for future employment; it was an attractive university town, and the location at Knights Parks was fantastic, with a great atmosphere. I moved to Aldershot in 2002 as the cost of housing in Surbiton was too great.

Norma: I was originally from Nottingham and wanted to widen my perspective by studying away from home. I could easily have stayed in Nottingham with my family and friends, but Kingston sounded a great place to study and it was surrounded by beautiful countryside. Also it was not far to travel into London and meet up with friends. After completing my degree I settled in Surbiton.

Sum up your memories of your time at Kingston in three words.

Peter and Norma: We still have friends there, and people who studied there who now live elsewhere.

Norma: I met Peter at Knights Park, in the bar in my final year, 1997. I had just finished a evening film lecture and was sitting with some fellow students, when I saw Peter standing at the bar. We have been together ever since our first encounter, and have only been married for five years; all in all, we have been together for 15 years. It was love at first sight, I guess I fell in love with his voice, the sound of his Scottish accent.

What did you expect to do after graduating?

Peter: Working as a set designer or architect.

Norma: Teaching and going into counselling.

Norma: I am now a counsellor and psychotherapist, counselling children in schools (play therapy/art therapy) from dysfunctional and disaffected backgrounds as well as adults from an integrative approach. Let's say I'm an all-rounder! In 2011/12 I was deputy Mayoress of Rushmoor Borough Council and I am now Mayoress of the same Borough for the municipal year May 2012/13.

What's been the most rewarding aspect of being Mayor and Mayoress?

Peter: Meeting people from all walks of life – the Buckingham Palace Garden Party one day and then working with young homeless people the next.

Norma: Like Peter said, It's been a very busy year, with the Queen's Golden Jubilee, meeting the Dalai Lama, Olympic games, openings, meeting people from all walks of life, attending other civic events, meeting other mayoresses and mayors in other towns and cities plus delegates from aboard, and raising money for three of our charities: Step by Step (homelessness), The Source (dysfunctional and disaffected young people) and Parity for Disability (with physical and multiple disabilities), young people's charities within Rushmoor. All three charities cater for young people in different ways.

What's your most amusing memory of Kingston?

Norma: Raising money for charity, being an member of the surf chicken society, working in the bar and in student finance and driving students home after a drunken night out in the bar, and also being intoxicated myself (never again).

Peter and Norma: As Mayor and Mayoress of Rushmoor, welcoming the Dalai Lama to a crowd of more than 6,000 at Aldershot Football Stadium.

Norma: In November 2012 I used students from Farnborough 6th Form Textiles College, local councillors and my husband as models. Between us (Mayoress and Mayor) we successfully raised £850 for our three charities.

Norma: Enjoy life to the full within reason and be of positive mind, body and soul.

Peter: Mitt Romney's defeat at the US Presidential Elections after he insulted the London Olympics.

Norma: When I recently attended Hampshire Police Brass Band, one of the police performers tripped getting up from her seat and I lost control! I wasn't the only one though.

Norma: Going away with my husband, staying in a hotel and just relaxing, doing nothing in particular, or going on days out to the seaside, or taking country walks, then having a nice meal afterwards.

Who do you take?

Peter: My wife and all the other residents of my council ward.

Norma: No living soul except for my husband, so that I can shop and be fed! Also must have my favourite colour lipsticks (always need to look good, even if it's my lips!)

Which book do you take?

Peter: Small Island by Andrea Levy – I love the way that the story is told through four different characters.

Norma: Small Island and The Help by Kathryn Stockett, because they're humorous and entertaining.

Which movie, and why?

Peter: Coming to America – just funny, and the only film that I can watch over and over again and am happy to recite word for word.

Norma: War Horse because the way in which the narrative is told through the eyes of a horse is heartfelt and moving.

Tell us something no-one would guess about you.

Peter: I'm a Doctor Who fan.

Norma: I'm comical, I love classical singing and performing and love the sound of my own voice!