Catching up with... Sara Cole, Amy Rhodes and Anni Rhodes 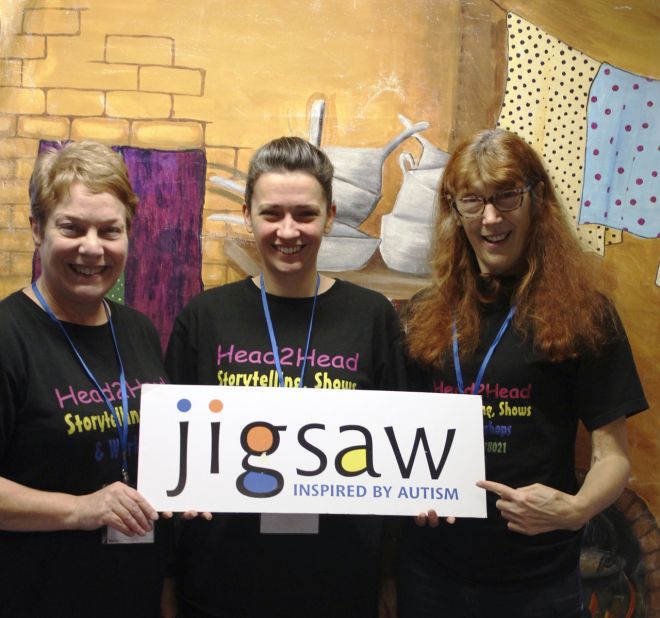 Sara, Amy and Anni are BA Drama graduates from 2005 and 2007 who are the life-force behind the multi-sensory Head2Head Theatre Company.

Sara: I was here 2001-2005 and studied Drama and Film Studies the first year, but then switched to full field Drama.

Anni: I was at Kingston between 2002 and 2005 also studying Drama, closely followed by my daughter, Amy.

Amy: My main reason was proximity to home.  Also the lack of exams but emphasis on coursework appealed to me.

Sara: As we were all mature students with either work or parenting commitments, we needed to be close to home.

Anni: However, what was first a choice of convenience, turned out to be the best career move we ever made.

Did anything on your course offer an opportunity that has altered your career path?

Anni: Me and Sara were given the opportunity of a 6 week placement at the RNIB in Redhill as part of the 'Devising and the Community' module.  We worked with Special Educational Needs & Disabilities (SEND) students towards a Superheroes Carnival.  As a result of this experience, all our work now involves young people with SEND.

Have you been back to Kingston since graduating? If so what for?

Anni: I was on the Production Team for the inaugural opening performances at Rose Theatre.

Sara: Me and Anni ran a character mask workshop for the KDS Act drama society in 2011.

Amy: I wanted to continue studying so went straight into an MA.  The plan was to finish that and then try to make a living purely through theatre or at least something performance related.  I've been lucky and found a few companies to work with, including Head2Head, and my career is filled with variety and challenges.

Sara: I went on to do a PGCE in Further & Higher Education and expected to continue teaching on a Performing Arts Diploma course.  However,  Head2Head Theatre offered me the chance to not only use my teaching, but also get back into performing  and put into practice my writing skills acquired on the 'Scribbling & Script' module.

Anni: I wanted to set up my own theatre company and I did!  I just didn't expect it to evolve into working within SEND.  Head2Head is now a charity with Terry Jones (Monty Python) as our Patron.  We are volunteer-led and have no salaried staff.  We produce multi-sensory shows, pantomimes, immersive learning experiences and storytelling for a wide range of ages and disabilities throughout London, the Home Counties and south/south-east England.  As a volunteer-led charity, every penny donated goes towards putting on shows for young people.  Unlike their neuro-typical peers, those with SEND have less access to theatre experiences and we want to change that.  We are always seeking funding to ensure that our productions are available. See what we're up to www.head2headtheatre.co.uk.

Sara: All three of us are Kingston alumni, so yes!

Amy: Facebook is an amazing way of keeping in touch with people as very few have stayed local to Kingston.

Anni: When I set up the Head2Head Theatre, I gave Kingston University drama undergraduates the opportunity for work experience, and that's when Amy first became involved.  Sara joined not long after so, yes, we are very much still in touch.

Anni: I disco dance while cleaning my teeth!