Catching up with... Stephen Thomas

This month we catch up with Stephen Thomas, TV presenter and channel co-ordinator for NBC. 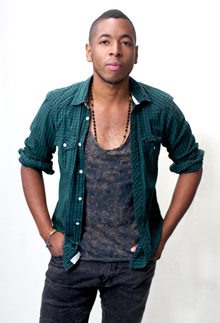 I studied Multimedia Information Systems Design BSc(Hons) from 2002 to 2006 at the Penrhyn Road campus; living in Kingston Bridge House for my first year and then moving in with friends in Surbiton.

Where are you from and why did you choose Kingston?

I'm from Croydon in Surrey.

I'd visited the Kingston Hill site with my college and liked it. Kingston's a lovely area and it wasn't too far from where I lived, but it was far enough to move out.

Sum up your memories of your time at Kingston in a few words.

Are you still in touch with anyone?

I have a group of four good friends from my university days and we catch up as often as we can. We travelled to Thailand together after uni and one is getting married next year, which is exciting.

What did you expect to do after graduating, and are you doing it?

I expected to work in film as a special effects artist, or in animation.

I'm actually working in the media industry as a channel co-ordinator for NBC (SYFY Channel) and also as a freelancer for MTV which has been really fun. I also work as a freelance presenter and run my own online channel with former Channel 5 presenter Gita Selli, called Distract TV – we have covered a number of events from London Fashion Week to the Way Out West Festival in Sweden!

Working in my chosen industry.

Work hard and live life, but also take chances as you only live once!

Watching back a video clip from a shoot I did.

Going to the beach with friends, followed by a crazy, fun night out, then to relax on Sunday.

What do you take? Macbook. Because it's genius. You can do everything with one device, simply amazing.
Which book do you take? Blood Crazy by Simon Clark. It was recommended to me, and is easily one of the best books I've ever read. The character development is great, the characters are very likable and you practically live their story. It's written from a 17-year-old's perspective but this adds to the book by putting you back in that mind set.
Which food? Caribbean food – I love jerk chicken and saltfish. Also spaghetti bolognese.
Which movie? The classic 1980s movie The Breakfast Club, by the late John Hughes, one of the best directors.

I have a twin brother.