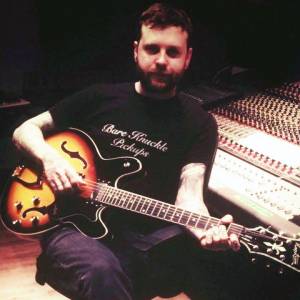 Tell us about a typical day for you.

That's the beauty of a career path in music, no day/week/month is quite the same. The variety is an important part of keeping me motivated in all the different projects I do, which include lecturing in music production, composing film scores, travelling around the UK and Europe to perform with my band, and producing, recording, mixing artists.

Over the last few years, whilst working on my recent film score, I had to meticulously split my time. I was working four days a week teaching music production by day, and then going straight to the studio working into the small hours on the score. The rest of the week I would wake up, head over to the studio and work until late o'clock. You've got to do whatever is necessary to do your part and contribute to the team. We definitely put the hours in!

What's been your career highlight so far?

I would have to go with writing the music for the documentary ‘The Nightcrawlers' (National Geographic); an unflinching exposé of Filipino President Duterte's war on drugs, which won Outstanding Short Documentary at the News & Documentary Emmys 2020. It was also among the films shortlisted in both the BAFTA and Oscars 2020 race for best documentary short subject, as well as making the 2019 IDA Nominations. It's a film that, as a small team, we lived with and worked on for almost three years and became good friends in doing so. I think we all feel we created something that we are proud of.

As a musician, another (and ongoing) highlight is travelling to and playing in new places around the world with my friends/bandmates; from Scotland to Lithuania and France to Italy.

Why did you choose to study at Kingston?

At the time I was looking for a Film & TV Masters to help focus my solo career. I considered a few places, but once I visited Kingston I felt it was the right place to come. The course structure suited me well too, as I could complete the course part-time over two years, which helped me balance the rest of life. The location and facilities were pulling points too!

I would have to say confidence. When I started the course I was taking my first steps into the composing to picture world, something completely different to anything else I had done. The support from my tutor and the University and the consequential degree distinction I received, gave me the belief that I could develop this further into a career.

Also, our close work with the animation department led to a couple of cool projects, including an animation series on The Norman Conquest for the BBC.

As a whole, my experience holds lots of good memories, from recording a live session at Coombehurst House to meeting lots of good people. However, I'd have to go with graduating with a distinction in the bag... not sure I've mentioned that before!

Tell us something no-one would guess about you.

Dangerous question... let me think without incriminating myself! Hmm... I guess I go against the grain of what most people think a stereotypical composer would be appearance-wise (I'm quite covered in tattoos). What else? I have been a vegetarian my whole life... am obsessed with dogs, football, baseball and films. That's about it really, I'm a simple kinda guy!