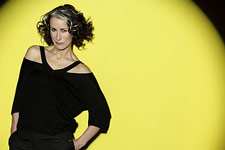 Caryn shot to prominence as presenter of BBC's The Clothes Show, a prime-time show she presented for 12 years. During her 25+ years in the fashion industry, including six as a fashion editor at i-D magazine in the early '80s, Caryn has interviewed everyone from Giorgio Armani to Yves Saint Laurent.

Caryn has written numerous books and articles, and is co-chair of the award-winning campaign, Fashion Targets Breast Cancer. She is a co-founder of the award-winning campaign All Walks Beyond the Catwalk, which promotes a much-needed broader range of beauty and body ideals from the heart of the fashion industry and is contributing to the way fashion is taught in art schools.

Caryn was awarded an MBE in the 2013 New Year's Honours list for services to diversity in the fashion industry. Since 2016, she has held a visiting professorship at Kingston University.

"Kingston University was where I grew up. Through the process of studying, I learned and completed more than just coursework. The people, experiences, sensations and fun I had at college form part of who I am now. Being at Kingston was a completely positive time."