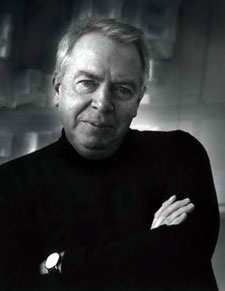 David is one of Britain's best architects. At Kingston he was a prominent member of the student body, running the Knights Park bar and becoming President of the Students' Union. David Chipperfield Architects was founded in 1984. It now has offices in four countries and employs over 200 people working on projects all over the world. In 2007, the practice won the RIBA Stirling Prize for its design of the Museum of Modern Literature in Marbach, Germany.

David is the recipient of RIBA's 2011 Royal Gold Medal, which is given in recognition of a lifetime's contribution to architecture. The Royal Gold Medal is approved personally by Her Majesty the Queen and is awarded annually to a person, or group of people, whose influence on architecture has had a truly international effect.

"Kingston had a real art school atmosphere. It was a very exciting place where people were studying fashion, graphics, design... The course gave me a really good introduction to architecture – I still think how good it was when I visit other art schools. So few of them now actually feel like an art school."