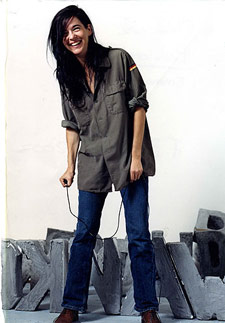 Fiona Banner raised eyebrows when her work Arsewoman in Wonderland, an X-rated version of Alice's fictional adventures, was shortlisted for the 2002 Turner Prize. She is a prolific artist who uses a variety of art forms to explore the limitation of words as a form of expression, and to challenge the way viewers look at language and films. Her public artworks have included bronze casts of giant full stops outside the GLA building on the South Bank, to be used as seats or to lean against, which were inspired by the role full stops have in language.

"College was important because it gave me a few years to get lost, to experiment, until I found my voice. To take this time is as important now, as it was then."