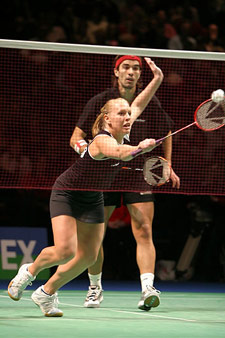 Olympian Gail Emms has taken British badminton to the pinnacle of the world rankings. She has played since the age of four and first represented England in 1995. With partner Nathan Robertson she became world number one in the mixed doubles, All England Champion, Commonwealth gold medallist and Olympic silver medallist, and was awarded an MBE in 2009 in recognition of her achievements.

After her retirement from professional competition in 2008, Gail started a portfolio career, and has engaged in badminton coaching, motivational speaking, media activities, TV commentary and product endorsements. She is a former board member of Badminton England and has also been an ambassador for the Youth Sport Trust and Badminton England.

Gail's charitable efforts have included climbing Mount Kilimanjaro in aid of the Laureus Sport For Good Foundation and running the 2017 Great North Run half marathon in order to raise money for SportsAid.

"Kingston was not just about studying for me. I grew up whilst I was there, I learnt to be independent and grew in self-confidence. Whether I'm on-court or off-court, the person I am today is largely down to what I learnt at Kingston."