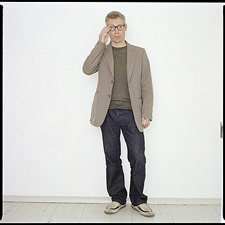 Jasper is one of today's most influential industrial designers and is credited with having revitalised rationalist design. After graduating from Kingston, he studied at the Royal College of Art and the Hochschule der Kunste, the Fine Arts University in Berlin. He is renowned for his elegant, humorous style and has designed everything from a tray-table to a tram system. Jasper has received numerous awards and his works are in the permanent collections of several museums, including the Museum of Modern Art, New York. His collaboration with Naoto Fukasawa recently produced the exhibition and book entitled Super Normal.

"What I took at the time for nagging, was actually genuine concern that I would be unemployable (which turned out to be true – nobody ever offered me a job). And I'm quite sure today that this opposition, and the grudging respect which grew in me for the place, coupled with the will to prove them all wrong, was the making of me as a designer, and for that I'll be forever grateful."