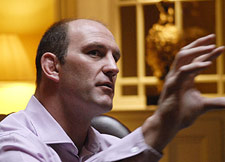 Lawrence has achieved almost every accolade in Rugby Union, including the second most capped England player with a total of 85. During a career lasting almost two decades, he has played with just one club and helped establish the Wasps as one of Europe's leading forces in the professional era. He was twice appointed captain of the England side and in the 2003 Rugby World Cup was the only player on the field for every minute of all seven matches. After that triumphant season, he was awarded an MBE, followed by an OBE in 2008.

Since retiring from rugby, Lawrence has done a huge amount of work for charity. He was named Celebrity Fundraiser of the Year in the 2011 JustGiving Awards, following the first Dallaglio Cycle Slam, during which he cycled the 1,750 miles to each stadium of the Six Nations tournament, raising £1.14m for Sport Relief and the Dallaglio Foundation (now Dallaglio RugbyWorks). Lawrence set up the Dallaglio Foundation following the death of his mother Eileen after her courageous battle with cancer. Working in Alternative Provision schools across the UK in London, Bristol, Newcastle and South Wales, the charity delivers a programme, RugbyWorks, which provides teenagers with the support, experience and opportunities they need to progress into sustained education, employment or training. The initiative, which is based on the values of rugby, is aimed exclusively at 14-17 year olds outside of mainstream education.

"Kingston provided a terrific environment for developing my sports and team skills – and of course was wonderfully close to Twickenham Rugby Stadium!"