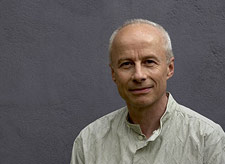 Richard is one of the world's leading architectural photographers and some of his works have been exhibited at the Royal Academy. In October 2008, the prestigious art publisher Rizzoli published his photographic interpretation of London and, following the book's success, it is to be released as a pocket-sized hardback.

After graduating in 1975, Richard joined a small firm of London architects but soon realised that architectural photography was his true calling. Now he is a partner in the image archive company Arcaid Images, which he set up in 1982 with his wife Lynne, also a Kingston graduate. Arcaid Images supplies architectural and design images to international clients, including design studios and publishers, and has completed an extensive photographic documentation of the refurbished Savoy Hotel in London. Richard is currently working on a book, Building With History, with the prestigious Foster + Partners, which was founded by Lord Norman Foster.

"Kingston allowed me space for creativity. I was enrolled on a course for architecture and without the vision of my tutors I could not have pursued my interest in photography. Not everyone approved of my taking pictures of architecture when they considered I should have been designing it.

John Farmer and Bastion Volkenberg influenced the way I looked at buildings. Peter Jacob supported my time to undertake my key photographic projects against the wishes of the Faculty – something I didn't discover for many years."