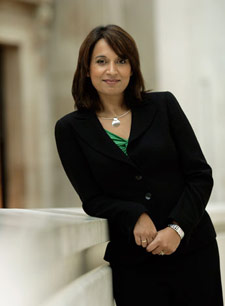 Ruby McGregor-Smith was appointed as Chief Executive of MITIE Group PLC, the FTSE 250 strategic outsourcing and energy services company, in March 2007. She joined a small number of women holding the position of Chief Executive in the FTSE 250 and is the first Asian woman to be appointed in such a role within that group of companies.

Ruby is a Chartered Accountant by profession. After completing a Economics BA(Hons) at Kingston University, she undertook her professional training with BDO Stoy Hayward. She then went on to hold a range of commercial and financial roles for Serco Group PLC. She moved to MITIE in 2002, where she joined the Board as Group Finance Director. In 2005, she was promoted to Group Chief Operating Officer and subsequently in 2007, to Chief Executive.

Since joining, she has seen MITIE grow its revenue from £0.5bn to over £1.8bn continuing its unbroken track record of profit and revenue growth. Ruby's role in driving successful growth in this unique organisation has been critical. She has challenged the practices of a small growth business, introducing new technologies, recruiting key personnel who fit with MITIE's entrepreneurial culture and influencing its acquisition strategy.

Ruby's achievements have attracted numerous awards, including the First Woman of Business Services by the CBI in 2007 and Business Woman of the Year at the Asian Woman of Achievement Awards in 2008. She is on the corporate board of Great Ormond Street Hospital and is also a non-executive Director with Michael Page International PLC.

"I have very special memories of my time at Kingston, particularly of the close friends I made while I was at university and the experiences we shared throughout that time. The education and training I received there was second-to-none, and helped to prepare me for what was to follow."