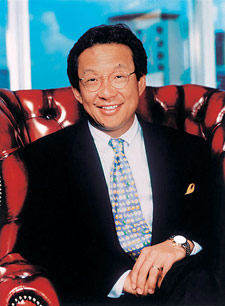 Tan Sri Francis is a Malaysian business tycoon who was ranked by Fortune magazine in 2004 as one of Asia's 25 Most Powerful Business Personalities. In 1988 he became the Managing Director of YTL Corporation founded by his father Tan Sri Dato' Seri Yeoh Tiong Lay. Since then, the YTL Group has grown from a single listed entity to one of the biggest conglomerates in Malaysia.

Tan Sri Francis is the first Non-Italian Board Member of the historic Rome Opera House and helped fund its restoration to keep it from closing. He champions arts enterprises like the Kuala Lumpur Performing Arts Centre and Singapore Dance Theatre, and is Regional Chairman of International Friends of the Louvre. He also promotes environmental conservation and renewable energy, serving on Nature Conservancy's Asia Pacific Council.

Tan Sri Francis was awarded the Commander of the Most Excellent Order of the British Empire (CBE) by Her Majesty Queen Elizabeth II in 2006 and upgraded to a Knight Commander (KBE) in 2019. In 2018 he was bestowed the Order of the Rising Sun, Gold Rays with Rosette by His Majesty the Emperor of Japan and in the same year the Italian government conferred upon him the honour of Grande Officiale of the Order of the Star of Italy.

"Kingston provided me with the impetus towards greater intellectual curiosity, self-discovery and godly passion to bring good to mankind. It was the incubator through which my god-given little creative talents and potential were initially unlocked, nurtured and that have now found their true voices with humility in entrepreneurialism and business leadership."