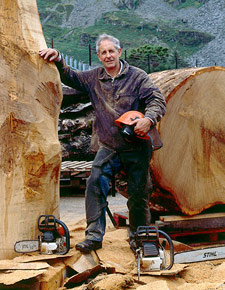 David is one of Britain's most original and internationally recognised sculptors. During his 40-year career he has created more than 2,000 works of art and exhibited in hundreds of group and solo exhibitions throughout the world, including the Tate, the Metropolitan Museum of Modern Art, New York and Tokyo Metropolitan Art Museum.

Born in Surrey, he moved to the mining community of Blaenau Ffestiniog on graduating, and still lives there in a converted chapel which is also his studio. David works mainly with fallen, unseasoned wood, local to the location where it will be displayed, using chain and milling saws plus burners to char it. The wood continues to change by drying, cracking and warping long after he has finished sculpting. He also works with living plants and his famous Ash Dome, planted in 1977, is now a mature dome of trees in North Wales.

David has worked with the Yorkshire Sculpture Park for 30 years, creating many pieces including Black Steps, a site-specific outdoor commission of 71 huge charred oak steps embedded in 30 tons of coal. He was elected a Royal Academician in 1999, and awarded an OBE for services to the arts in 2004.

"Without the three years at Kingston College of Art I would not have found my way to a life with sculpture. It was the early sixties, a new attitude to art teaching embraced the spirit of that decade, so dynamic, brave, bold and positive – anything was possible."