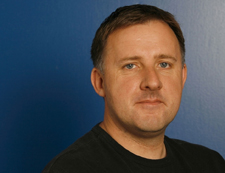 Ed is a technology expert with responsibility for realising Google's mission to organise the world's information using geography, through tools such as Google Earth and Google Maps. He was also responsible for introducing the BlackBerry to the UK government.

Graduating in 1987 with a degree in geography, he earned a masters degree from Cranfield Institute of Technology and returned to Kingston as a lecturer in the emerging field of Geographical Information Systems (GIS). Ed was part of the Kingston team that helped to establish the world's first undergraduate degree in GIS in 1989.

He joined software company Autodesk Inc, creating the first online map of general election results in 1997, and in 2001 was appointed Chief Technology Officer for Ordnance Survey, the first such post in the 200-year history of Britain's national mapping agency. Ed went on to become the organisation's youngest Director of IT. In 2006, Ed set up his own company, Open Geomatics and, since 2007, he has been Google's Geospatial Technologist, which includes developing and promoting products such as Google Maps, Google Map Maker and Street View, and maintaining links with universities, research and standards organisations. Ed is a Fellow of the Royal Geographical Society.

"At Kingston, I set up one of the first websites about GIS. It became very popular globally in the 1980s, though it used to go offline every Monday morning when the cleaner unplugged my Apple Mac to use the Hoover. I have fond memories of Kingston and my time there was very special."