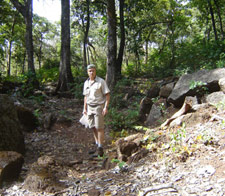 Paul Harbidge has 25 years' experience as a geologist, gained mainly in West Africa, where he worked for Rio Tinto, Anglo American and Ashanti in the search for new gold mines.

Paul joined GT Goldcorp, a Vancouver based gold producer, as Senior Vice President for Exploration in 2016. In September 2019 he was promoted to the position of President and CEO. Prior to joining Goldcorp, Paul was General Manager of Exploration with Randgold Resources.

"Kingston gave me an excellent grounding in the science of pure geology, supplying me with the platform on which I have built a successful career in the mineral exploration and mining business."