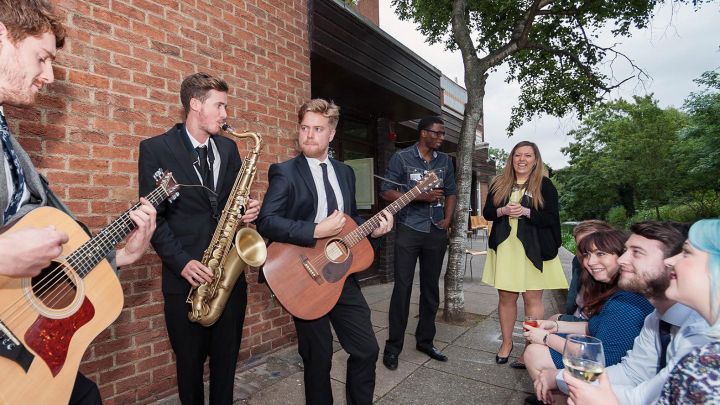 Kingston University Variety Café continues in 2017 with the talented vocalist and composer Phil Brookes. Born in Liverpool, Phil is no stranger to the stage. He began performing, applying his singing and piano lessons, when he was only 6 years old. Classical training followed whilst singing with the Liverpool Cathedral Choir, before taking a more contemporary musical route drawing influence from a variety of genres including Soul, Jazz, Funk, Pop and Rhythm and Blues.

Phil moved to London to further his musical career whilst studying Creative Music Technology at Kingston University. It was here that he created and performed with his popular band The Philharmonics which included some of South West London's finest musicians. The band performed well known songs with their own twist to the arrangements as well as new songs composed by Phil for his EP. His debut, acoustic single, Lord Knows I tried, co-written with fellow Kingston student Tai Li Ling, was released as a debut single, in June 2015. This is included in the EP and is available to stream free from Soundcloud. The EP This Is the beginning was released in May 2016 to positive reviews. It features the popular tracks Everything, As We Are and the ballad I Wish You Well all written by Phil.

Phil performs in venues around London in Camden, Shoreditch and Kingston and combines working in the studio on new music planned for release in 2017 with his current M.Mus (Music Performance) studies at Kingston. Phil guarantees an exciting and uplifting performance not to be missed.