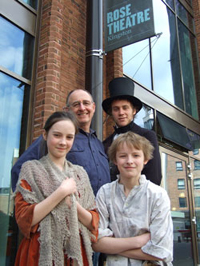 The trials and tribulations of living on the streets of 19th Century London are set to come under the spotlight in a production opening at Kingstonâ€™s Rose Theatre this week. Co-written by Kingston Universityâ€™s Head of Performance and Screen Studies Frank Whately, The Ragged Child tells the tale of a young boy who is sentenced to transportation to Botany Bay for theft. Twenty children from local schools will take part in the production, directed by Mr Whately, Jeremy James Taylor and Jo Billington. They will star alongside students from Kingston Universityâ€™s drama degree.

Centred around Joe Cooper and his sister Annie, played by Harry Ashbee, 13, from Reedâ€™s School in Cobham, and Anna Lancaster, 11, from Latchmere School in Kingston, the musical revolves around the life of street children during Queen Victoriaâ€™s reign and the work of reformers to try and improve their plight. The idea evolved in 1985 when composer David Nield was commissioned by the Shaftesbury Society to write a series of songs to mark the centenary of the death of the Earl of Shaftesbury and called on Mr Whately and Mr Taylor for help. Their research on the Victorian reformer fired their imagination and, after producing six ballads, they knew there was more to tell. â€œThere was so much happening in Victorian times, not only with the development of the Ragged Schoolsâ€™ Union to help poor city children but with crime, the transportation of child convicts to Australian colonies and the long working hours endured by children, not to mention an outbreak of cholera which wiped out 60,000 people,â€ Mr Whately said. â€œMusical theatre seemed the perfect way to bring the experiences of street children from the period to life.â€

The production team took four months to develop and write the musical. Researching the horrors some street children went through was particularly poignant for Mr Whately whose great-great-grandfather Archbishop of Dublin Richard Whately, chaired the 1837 House of Lords committee on the abolition of transportation. The final script incorporated both the good and bad sides of the Empire documenting social conditions and international conflict alongside the 1857 Great Exhibitionâ€™s displays of ingenuity and industry, he said. First hitting the stage at Tiffin School, in Kingston, in 1986, the play became a regular on the National Youth Music Theatre calendar and was performed up and down the country and abroad to rave reviews. Actors to start their early careers in the play include Jude Law, Trainspottingâ€™s Jonny Lee Miller and Kingston University drama graduate Ben Barnes who is about to star in Disneyâ€™s The Chronicles of Narnia: Prince Caspian.

Kingston University drama student Matthew Thom, who plays the Earl of Shaftesbury in the latest production, said he had really enjoyed sharing his talents with the younger stars of the show. â€œI canâ€™t wait to tread the boards at a professional theatre,â€ he said. â€œItâ€™s really exciting to know that Iâ€™m following in the footsteps of actors like Jude Law whose careers really took off after cutting their teeth in this show.â€ 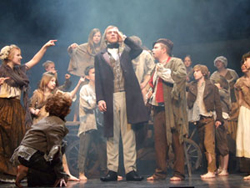 Mr Whately said he was looking forward to bringing the play home to Kingston. â€œOver the years The Ragged Child has enjoyed enormous success, including being shown at the Edinburgh Festival and on the BBC,â€ he said. â€œI jumped at the chance to put it on at the Rose Theatre because itâ€™s a story which examines real issues like poverty and war which affect every generation. It is as relevant to audiences now as it has always been and it is really rewarding for us to be able to bring the production back to the Kingston community where it first enthralled audiences all those years ago.â€