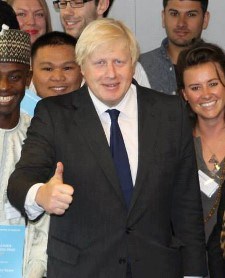 Three current students and a graduate from Kingston University were among those shortlisted for the Mayor's Low Carbon Prize 2013. The finalists pitched their ideas at a ceremony held in London's Royal Docks on 13 June to an expert judging panel included Dragon's Den investor Deborah Meaden, international fashion icon Vivienne Westwood and Zac Goldsmith MP.

Minka Luesse, a Fashion MA student, said her idea was to replace synthetic fibres in jackets with a 'greener' material. "I wanted to show that fashion can be beautiful and luxurious as well as sustainable," she said.

Shruti Barton and Celia Small, who are both on the Advertising and Creative Economy MA course, cut it fine with their entry submitting their proposal just 60 seconds before entries closed. Their idea is for a chain of vegetarian cafes and restaurants called 'MEET'. "They would be meat-free, eco-friendly and ethical," Shruti said. "We would want MEET to operate as a collective and make better use of local farmers and growers to reduce food miles." 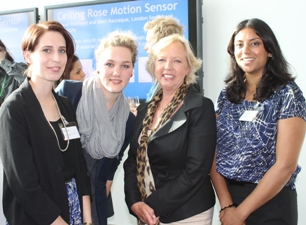 ro Molina, a graduate of the Renewable Energy Engineering MSc came up with a plan to reduce the amount of lighting left on overnight in the docklands area."By using the smart control systems of London's high rise buildings to switch off lighting on alternate floors, we could create a dramatic effect at the same time as saving power and sending a powerful visual message promoting energy saving," he explained.

Mayor Boris Johnson told Kingston's students he was impressed by the University's green credentials. "You are a great centre for innovation and your sustainability reputation is growing. I look forward to seeing some faces from Kingston University on the front page of Fortune magazine," he added.

The Mayor's Low Carbon Prize is open to students at universities and further education college across London for ideas which will reduce the capital's carbon emissions.

Kingston University is no stranger to green success. Last year a team of five students jointly won the Mayor's Low Carbon Prize with a green key concept aimed at encouraging people to recycle, reduce their energy use and throw out inefficient items such as old fridge-freezers.