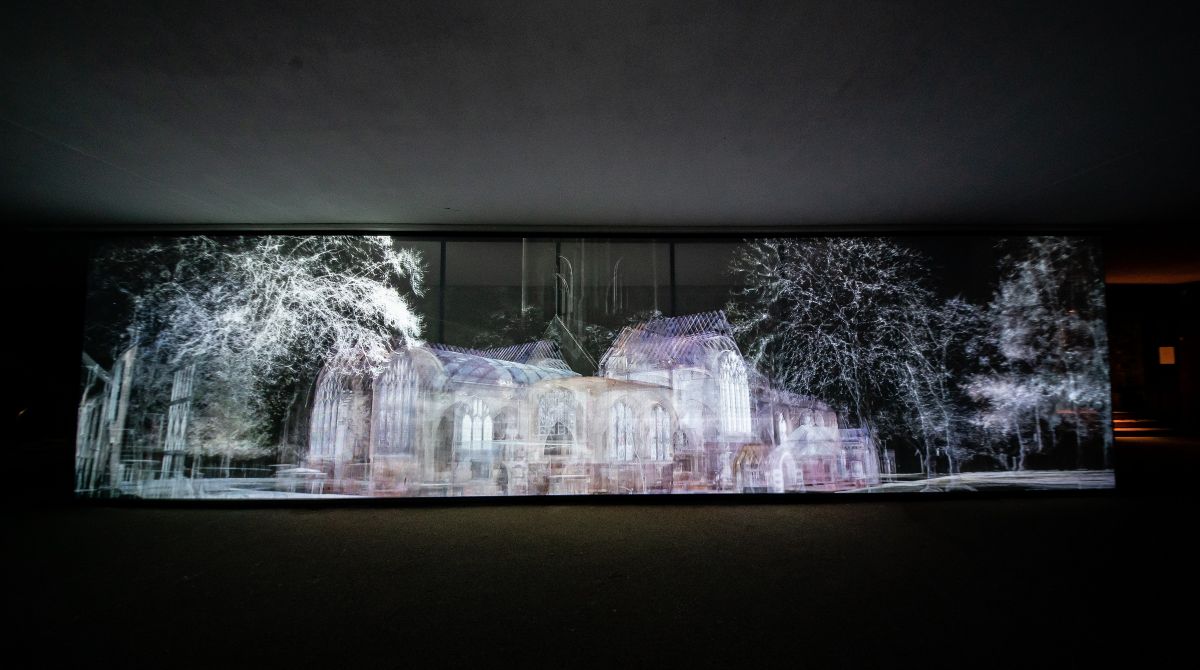 Echolocation - an 11 metre long, three-channel video installation - is being projected onto a mesh screen in the tunnelled walkway, located between Cote brasserie and the Bishop Pub, in the heart of Kingston leading to the Riverside Walk. The piece highlights the borough's rich heritage by recreating a historic church using lidar scanning, a process similar to echolocation utilised by several species of bats inhabiting a nearby conservation area.

Mr Collishaw created the large virtual version of a 900 AD church for the installation, which was commissioned by Canadian and Riverside Estates, owners of Riverside Walk. Lorena Popovici, a Computer Graphics Technology BSc (Hons) student, animated the bat featured in the work, while Josephine Miller, who is completing an Art Direction BA (Hons), provided texturing on the winged mammal.

The piece encompasses more than 1,000 years of borough history, highlighting Kingston's royal heritage. Athelstan, the first king of a unified England and the first to wear a crown, ascended the throne in 925 and chose to be consecrated in Kingston upon Thames. A further seven Anglo-Saxon kings followed in his footsteps. The coronation stone, which has been relocated a number of times in the intervening years, now sits outside Kingston's Guildhall, while All Saints Church stands on the site of the original chapel.

A virtual version of the church was created for the installation using data gathered by Lidar - a method of measuring distances using a pulsed laser to construct a digital 3D representation of space. The process mimics the method by which bats navigate, determining the location of objects by sound. The video is projected on to a semi-transparent fine mesh made from stretched fishing net - another Kingston reference as fish feature prominently on the Royal Borough's crest.

In a further connection to Kingston's heritage, the piece is presented as animation in a nod to the work of former Kingston resident Eadweard Muybridge, who pioneered stop-motion photography and motion-picture projection with his studies of moving animals. Muybridge has a building named after him at Kingston University, which also houses a collection of work from the pioneering photographer in its archive.

Lorena and Josephine got involved in the project through the University's creative agency, Studio KT1, which provides paid opportunities for students to work on commercial briefs with real-world experience alongside their studies. "The project was an outstanding opportunity for our students to collaborate with a world-renowned artist on a prominent piece of work for the borough," Studio KT1 Commercial Projects Manager Claire Selby said. "It's been great to see students from different faculties coming together to share their skills and play a part in this wonderful piece of public art."

A London-based fine artist who came to prominence the late 1980s and has exhibited across the globe, Mr Collishaw described the work Lorena and Josephine had undertaken as a meticulous process. "There's not a lot of readily available information in terms of bat flight, just a few grainy videos we used as a basis for the animation," he said.

"In addition to a realistic looking bat, they also developed a bat with point cloud simulation. We combined the two to create a version that fitted the ghostly point cloud church scan," Mr Collishaw said. "Josephine and Lorena also created a route for the bat that matched the camera angles of the church fly-through video. There was a lot of experimentation with different options."

Working on the installation had been a life changing experience, Lorena said. "I've met some amazing people who I wouldn't have come across otherwise," the 22 year old,said. "It's been incredible to be involved in such a major project within the field of my dream career."

Creating the bat, Lorena made sure the most intricate details were finely tuned, down to the feet and air pockets in the wings. "I analysed the motion of the church scan video and, through a lot of trial and error, managed to create the illusion of the bat actually flying through the church, matching the camera movements and animating different flight speeds."

The bat travels through the church with the students helping to create a skeletal, almost ghostly effect to compliment the translucency of the video.

The job of adding texture and 3D painting fell to art direction student Josephine, who has also recently been bringing her talents to the forefront in the borough through the Colouring in Kingston initiative. "Using the scanned visual of the church, I created a skeletal, almost ghostly, effect to compliment the translucency of the video," the 21 year old explained.

Both students believe periods of lockdown that have prevented people from leaving their local area during the pandemic mean there is an appetite for new and interesting cultural works. "It's important to share art to inspire younger generations and it can bring the community together through an immersive experience," Josephine said. "It was really great to do this in Kingston, especially because there is so much creative talent in the community."

Canadian and Riverside Estates contacted Studio KT1 after Mr Collishaw accepted the commission. "Involving Kingston University seemed a fantastic opportunity for the students and for us to involve the community in the commission," project liaison manager for Canadian and Portland Greg Miles explained. "We couldn't be happier with how well the art works and hope residents and visitors to Kingston and Riverside Walk feel the same way. After all the difficulties we've faced over the past year, we hope this space provides inspiration and that better times lie ahead for Kingston."