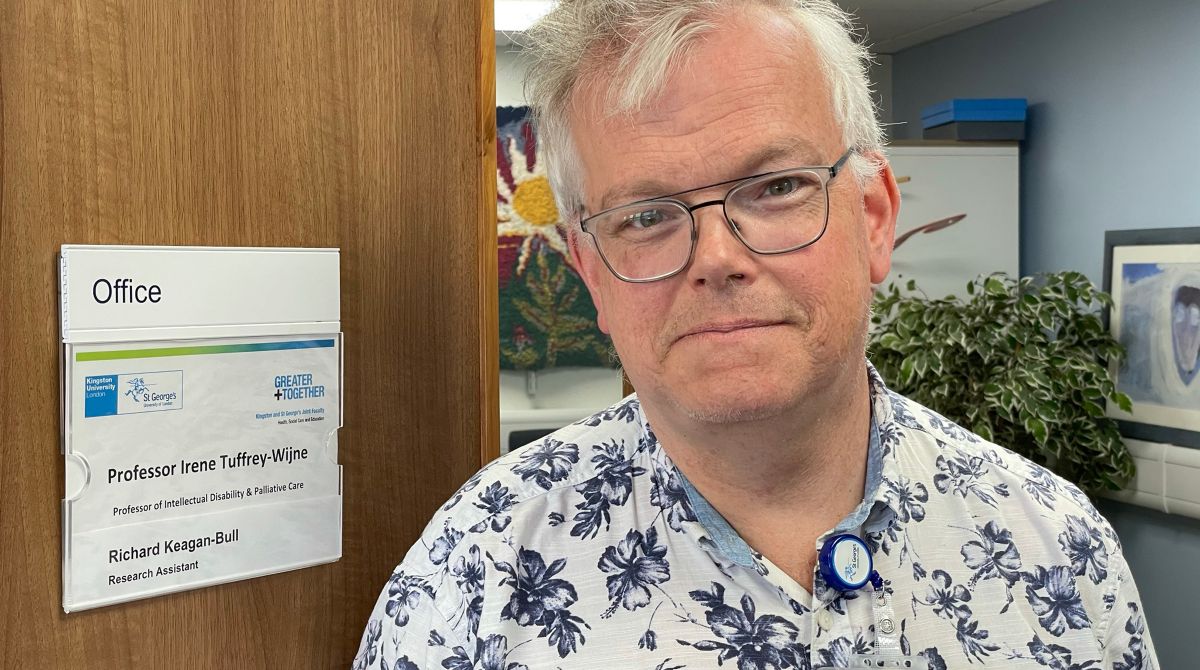 Research Assistant Richard Keagan-Bull has been named as one of the most influential disabled people in the UK by the Shaw Trust.

A research assistant at Kingston University and St George's, University of London has been named one of the top 100 most influential disabled people in the United Kingdom in the Shaw Trust's prestigious Disability Power 100 rankings. Richard Keagan-Bull, who has learning disabilities, was featured in the annual list, which celebrates leading figures from around the country working to break the stigma around disability and create a more accessible and inclusive world.

Mr Keagan-Bull said he was honoured to be named on the Disability Power 100 list. "Fifty years ago, I don't think my mum and dad would have dreamed that I would be working in a university or living in my own flat," he said. "When I was younger, people like me had a lot of doors closed to us and we were made to feel we wouldn't be able to do anything.

"I didn't get any GCSEs when I left school and never thought I would be where I am now. While things have come a long way since then, my greatest hope is that we will reach a point where people with learning disabilities are never subject to discrimination and have equal opportunities across our society,"

In 2019, Mr Keagan-Bull took part in a pioneering programme launched by Kingston University and St George's to help people with learning disabilities become researchers. The eight-week pilot course was developed by leading learning disability and palliative care expert Professor Irene Tuffrey-Wijne from the Faculty of Health, Social Care and Education.

Since completing the programme, Mr Keagan-Bull has become a research assistant in Professor Tuffrey-Wijne's team and is currently working with her on a project helping the NHS to tackle health inequalities for people with learning disabilities and autism. He is also involved in an NIHR-funded study focused on supporting older people with learning disabilities and their families to plan ahead for the  future.

The Shaw Trust influencer listing is not the only accolade Mr Keagan-Bull has received this year. He was also part of a University research team that picked up the Innovation Award at this year's University Alliance awards for its popular webinar series supporting people with learning disabilities during the Covid-19 pandemic. The webinar was used as part of Professor Tuffrey-Wijne's successful campaign to see people with learning disabilities prioritised for the coronavirus vaccine. The campaign's profile led to Mr Keagan-Bull being interviewed for a feature on BBC News.

Professor Tuffrey-Wijne said Mr Keagan-Bull's passion for equality meant it was no surprise he was chosen as one of top 100 most influential disabled people in the country. "Richard started working with our research team less than 10 months ago and has already had a huge impact here. Looking at all his many activities and achievements over the past years, it is clear we are extremely lucky to have him as our colleague. It's not only that we really couldn't do our research without him, but also the office is a happier place with Richard in it," she said.