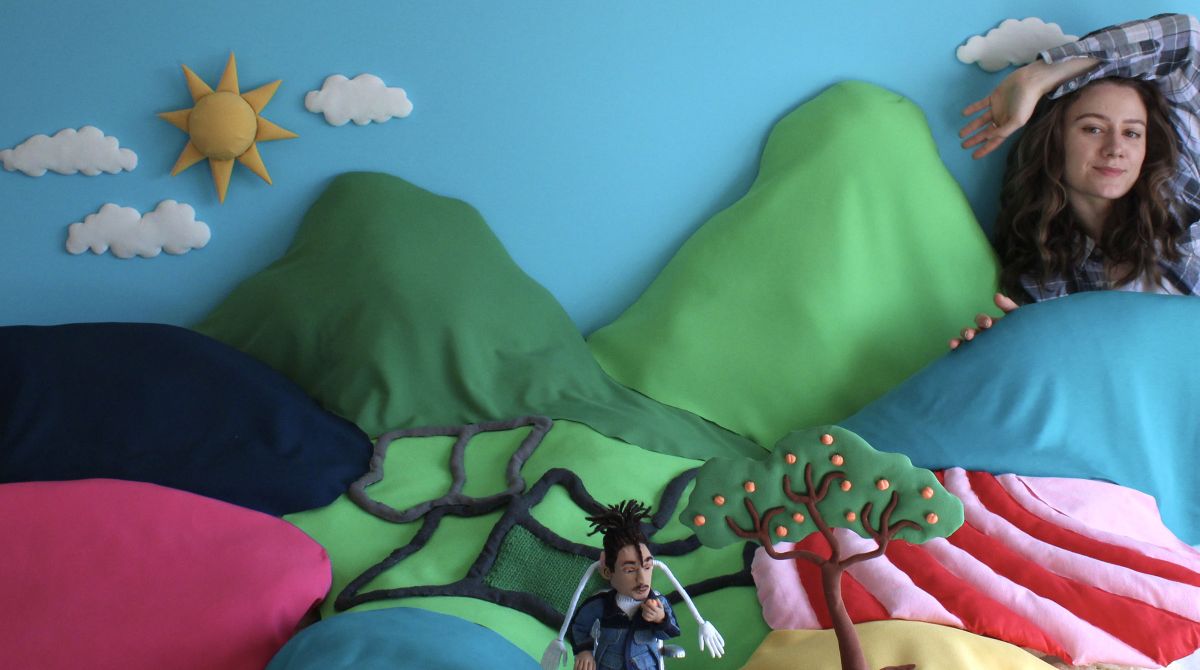 A Kingston School of Art alumna has created an animated music video for former Rizzle Kicks singer Jordan Stephens which explores the rollercoaster of emotions associated with anxiety.

When illustration animation graduate Phoebe McCaughley started working on the video for new song Feel Joy, she took direct inspiration from Stephens' lyrics, as well as her own experiences during the Covid-19 pandemic.

"I related to the lyrics of Feel Joy straight away. I went through a period during the Covid-19 lockdown where I would wake up every morning with a heavy chest and feel anxious without being able to put my finger on why," she said. "Some days I didn't feel that way, so I wanted to explore the random unpredictable nature of how your brain can decide your emotions for you."

A mental health advocate himself, Jordan Stephens uses both his music and platform to talk openly about his own issues and encourage others to join in the conversation.

The film follows a puppet version of the singer, handmade by Phoebe, on one of the days his brain has decided to have a good day, determined by spinning a wheel of fortune in the opening scene. Strapped into a chair and guided by a brain character, he goes on an uplifting journey through rainbows, flowers and starry night skies, which is intermittently interspersed with dancing scenes.

"I wanted it to be joyful, but I also wanted the brain to have a sinister edge, like it could change the day at any moment." Phoebe explained. "I portrayed the brain as being quite physically forceful at times. It pulls Jordan on to the chair, puppeteers his hands, and catapults him back into bed in the final scene ready to start another day."

The video was made entirely with stop motion, a laborious technique in which a camera is repeatedly stopped and started, frame-by-frame, and inanimate objects are physically manipulated to give the impression of movement.

"This went beyond just moving the puppets themselves. I had to move each strand of hair to create the effect of it swaying in the wind, and when Jordan walks through a field of flowers, I had to move each individual petal," Phoebe explained.

The talented alumna, who graduated in 2019, paid tribute to her personal tutor Stephen Brown, who was a source of motivation for her throughout her studies. "He saw my passion for stop motion and encouraged me to use the studios throughout the summer to practice," she said.

"I fell in love with the hands-on process of stop motion. It's incredibly rewarding to go from sketching story boards to making something move on the screen and then watching the final product of your initial idea," she added.

Over the past three years, Phoebe has set up her own stop motion animation company and developed a growing reputation, working with clients ranging from Alexander McQueen to Atlantic Records.

Reflecting on her career since she graduated, Phoebe gave three words of advice for recent and soon-to-be graduates. "Trust the process," she said. "It's really normal to find it challenging after graduating, and you don't need to have your path all mapped out. I am still figuring things out, and there will always be ups and downs in your journey," she added.

Stephen Brown, senior lecturer in illustration animation, commended Phoebe for her recent achievements. "We encourage our students to take control of their own learning as much as possible and Phoebe is an exemplar of this. In the summer between her second and third years she dedicated an enormous amount of extra-curricular time to learning the craft of stop motion filmmaking. This meant that when she wanted to explore challenging ideas in her final year at Kingston, she was able to blend technique and concept together to create exciting, sophisticated and thought-provoking outcomes," he said.

"It is really great to see that she continues to develop her remarkable and distinctive practice, and I have no doubt that we will see more exceptional work from her in the future," he added.